A boy’s dream later becomes a man’s reality. We all had our favorites in high school whether it was cars, girls, food or sports. If you didn’t marry your high school sweetheart, become a five-star chef or have success as a professional athlete, then the only dream left was your high school fantasy car.

We all had one, and it was always way out of our bag boy, gas station jockey price range. But we always thought that someday we’d be able to afford it.
That’s what Earl Payton from Pelican Hill, California, believed. He bought his teenage dream car about 15 years ago with the intention of building and driving it. Earl wanted the coolest ’56 Chevy Bel Air Gasser style around. During the ’60s Gassers were all the rage in drag racing. There’s just something about the look: raised front end with 10-spoke Gassers in the front and ET Fuelers in the rear wrapped with Hurst drag slicks. The car had to be painted black with black diamond-tuck leather interior with a healthy Chevy small-block under the hood, a Muncie four-speed trans bolted up to it, and a Hurst shifter and a posi rearend. 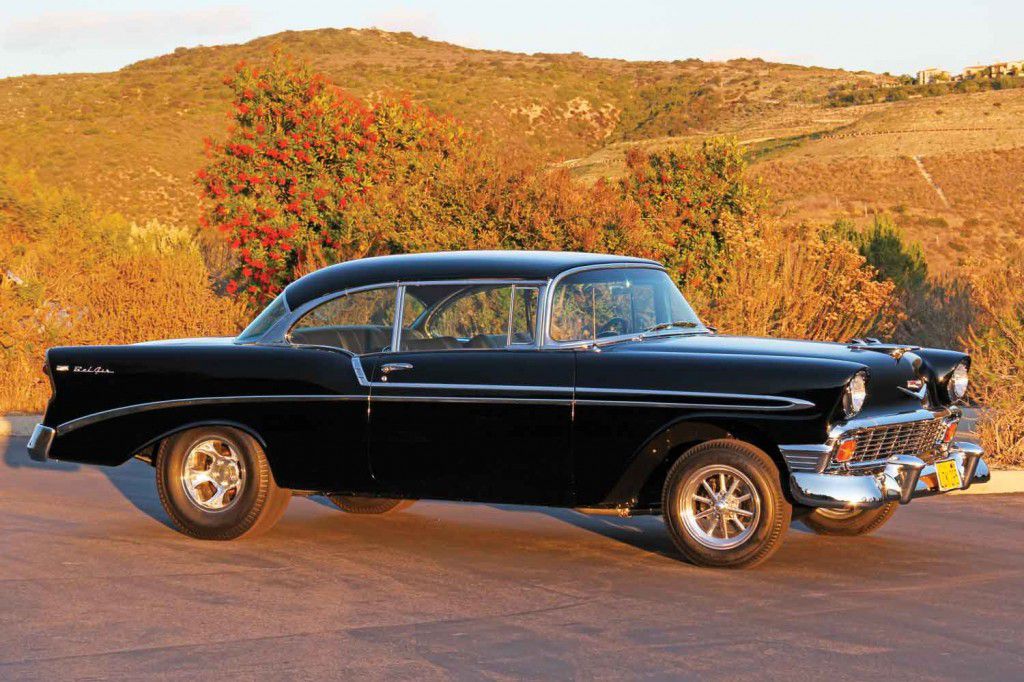 Keeping that vision in his mind since high school, Earl approached Ron Cambra from Orange, California, who is known for rolling out awesome show-quality masterpieces from his Cambra Speed Shop. Established builders and fabricators the Engle brothers, David and Greg, and Ron’s brother Larry teamed up with Ron to get to work on the car. Earl collaborated with the team about different ideas to build a showstopper ’56 Bel Air that he could drive daily. What you will see on the following pages is what they came up with.
Their skilled efforts produced Earl’s totally frame-off ’56 Bel Air. The frame was removed from the body, and then the frame was stripped down to bare frame rails and cross members. Because it was originally an automatic Powerglide transmission, the cross member was removed and a new version was installed to accommodate the Muncie four-speed manual trans. To achieve the proper Gasser attitude, the front suspension had to be raised, so the crew inserted urethane spacers between the new big-block front coil springs. Spacers were also made to maintain the correct geometry for the ball joints. The front suspension is equipped with a pair of disc brake calipers, rotors and a master cylinder from a ’70 Chevelle. A rebuilt Chevy 605 steering box handles the lateral direction. 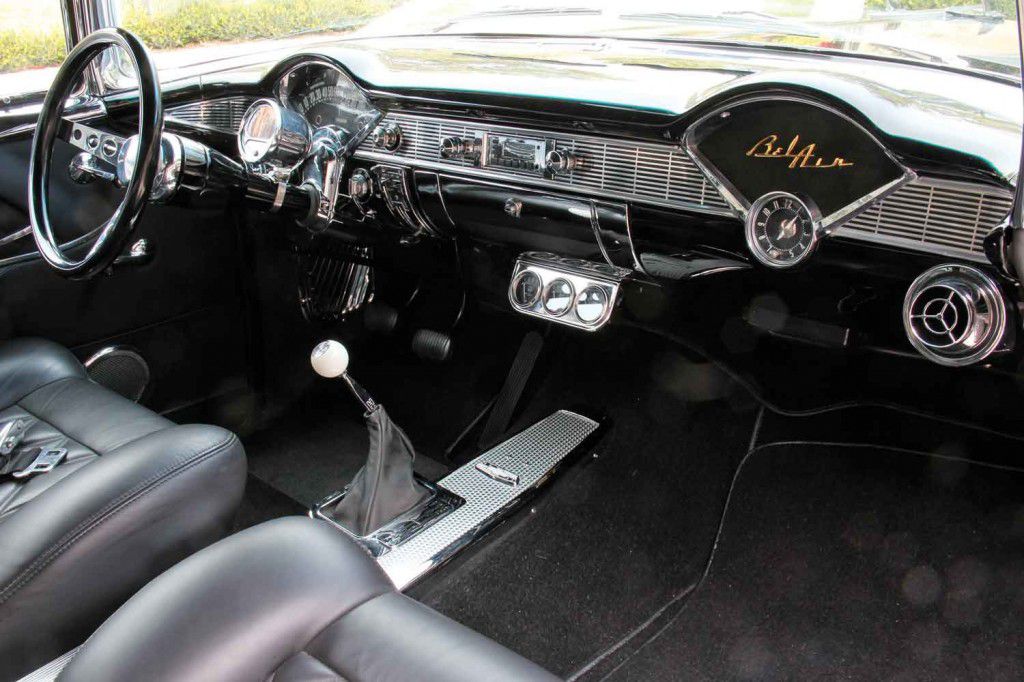 The factory dash was maintained with its unique double hump profile that was part of the classic 1955, 1956 look shared with Corvettes. The car was originally equipped with an automatic (Powerglide). A hole was cut in the transmission tunnel to accept the Muncie 22 manual transmission with a Hurst shifter. The center console was from a 1963 Impala.

The front wheels are ET Gasser 10-spoke chrome models (15 x 5) encased in Firestone 5.60-15 rubber.
Next, the frame was delivered to Specialized Coatings in Huntington Beach, California, where it was media blasted and powder coated gloss black. The body was mounted onto a body dolly and the front fenders and hood were removed. David and Greg cleaned and smoothed the firewall and inner fenders. They were also responsible for hours and hours of massaging and prepping the body’s sheet metal for paint. The body was taken over to Joe Schmoe’s Customs in Orange, California, were Joe Maresetti did some final body prep work before applying multiple coats of Valspar Black single stage. 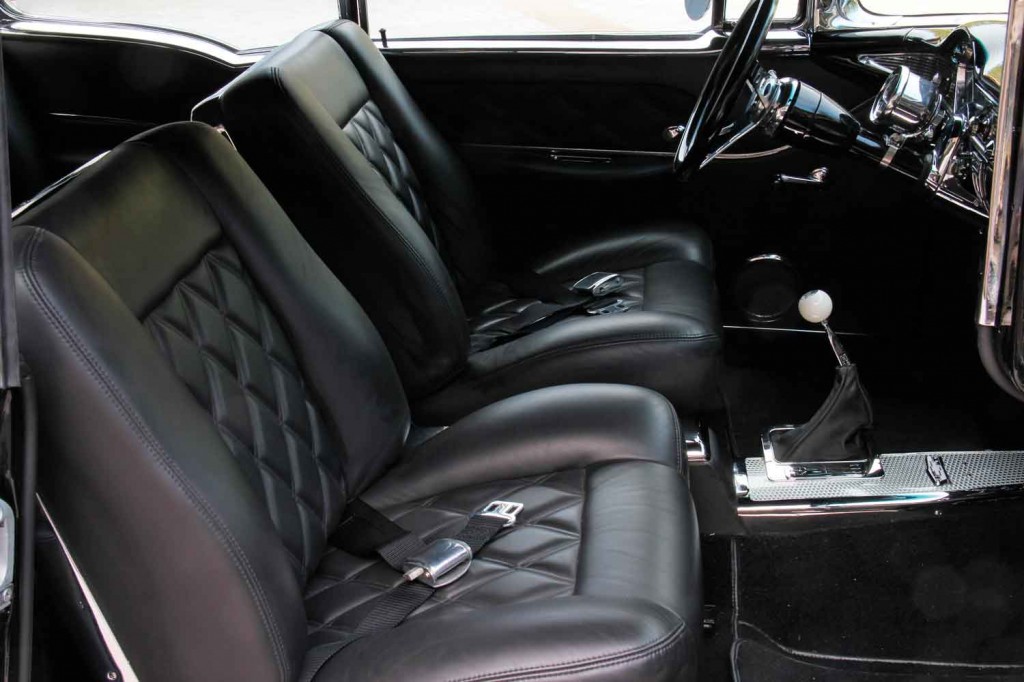 A pair of 1963 Chevy Impala bucket seats was modified to adjust electrically with the flip of a switch. Pete Engel at Westminster Upholstery was responsible for the immaculate black leather diamond-tuck seats, door panels, headliner and wool carpet.

Under the hood, a built Chevy 350-ci block was bored and stroked to a 388-ci by John Hollins at Hollins Machine in Orange. The block was bored .030 over a stroker crank fit with 3.750 Carrillo rods and JE Pistons. A mild Clay Smith camshaft was inserted, and a pair of Chevy 350-ci 2.02 cast iron cylinder heads was stuffed with Chevy high-performance lifters. A Chevy valve train with Mooneyes aluminum finned valve covers and aluminum finned breathers add to the period-correct appearance. To achieve that unique gear-meshing whine, a Pete Jackson gear drive was bolted onto the camshaft and crank. An Edelbrock dual-quad Performer RPM aluminum intake manifold was capped with two Edelbrock 500-cfm Performer carburetors. The Pertronix ignition system and coil were nicely disguised inside a finned aluminum beehive case. The March 130-amp alternator keeps the electrical juices flowing. A Muncie 22 four-speed manual transmission keeps Earl’s left foot busy. A custom driveshaft was made to spec by the crew at Driveline, Inc. in Mission Viejo, California. Currie Enterprises in Anaheim, California, was responsible for building a bulletproof Ford 9-inch rearend stuffed with 4.11 gears and a posi unit along with disc brakes. The rearend was suspended by a new set of leaf springs, hangers and shackles. Monroe shocks dampen the Chevy’s ride. Earl’s ’56 gets its style and traction from a pair of ET Fueler chrome wheels (15 x 8 ) and Hurst (8.20 x 15) Drag cheater slicks. 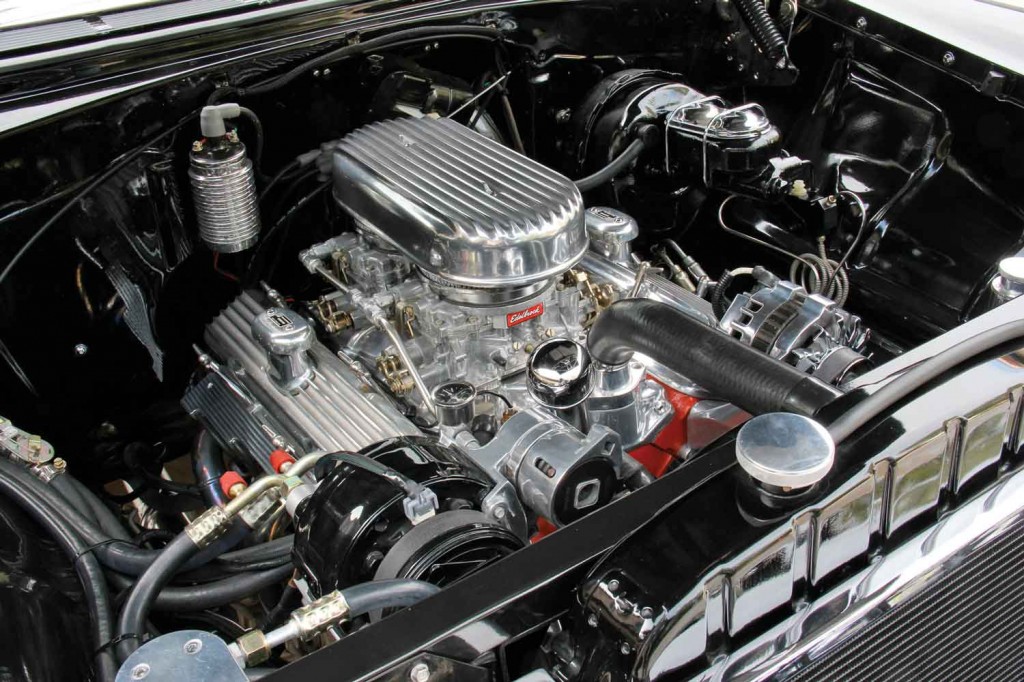 Under the hood is a Chevy 350-ci that was machined and stroked to a 388-ci power plant. It has an Edelbrock dual-quad intake manifold with a pair of 500-cfm Performer carburetors. Mooneyes aluminum finned valve covers with breathers, air cleaner and coil beehive cover gives the engine compartment a truly '50s, '60s flavor. A Vintage Air air conditioning system was installed to maintain comfort inside while cruising on hot summer days.

Inside Earl’s ’56 we find ’60s-style diamond-tuck black leather bucket seats borrowed from a 1963 Impala. They were converted to electric adjustable with black wool blend pile carpet, custom door panels and headliner. Pete Engel at Westminster Upholstery in Anaheim did all of the incredible stitch work. An old school three-spoke Grant steering wheel caps the stock steering column. To maintain the engine’s vital signs a set of Mooneyes black face oil pressure, volts and water temp gauges was mounted under the center of the dash. A very cool traditional Mooneyes half sweep can tach was mounted on the steering column.
The first time Earl showed his ’56 was at the 2011 Grand National Roadster Show at Pomona, California, where it took Best in Class honors. Earl can be seen cruising up and down Pacific Coast Highway with a broad smile on his face.