Instrument repair is becoming somewhat of a lost art. There are a lot of little springs, magnets and other parts hiding inside the average instrument, and it takes knowledge and practice to get them working again. Sure, you can get entire clusters from the major suppliers, but what if you want to retain the stock appearance?

Back in the day, there were plenty of places where you could get stock instruments repaired and upgraded, but not any longer. Repairs have become a virtual cottage industry. One such case was with the tachometer in this vintage Mustang. There are two considerations when dealing with this particular item. This one had simply worn out and needed to be replaced or repaired, but it also needed to be upgraded to work with modern ignition systems. Why, you ask? Well, Ford had the idea that running the stock unit in series with the ignition system when the vehicle is in operation was a good one. It is an odd design on a variety of levels, but new (i.e., aftermarket) ignition systems use a tickler wire to operate the tach, which is all in all a much better design.

So, even if your stock tach is still in good working order, if you upgrade the ignition systemâ€”a good idea due to the age of the stock systemâ€”you still have a problem with the tach not working. So the question is how to have a modern tachometer with the stock look? Itâ€™s simple: Go to a guy who still practices the nearly lost art of instrumentation repair.

We were at Pomona Valley Customs in Montclair, California, where we watched Bruce Hollingsworth replace the stock tachometer with a new VDO unit, yet still keep it looking stock. Hollingsworth has 29-plus years experience specializing in speedometers and electrical. (See, heâ€™s even fastidious about his stated time experience; weâ€™d have rounded it up to 30.) He is known as “the guy you take it to when you need a gauge or instrument cluster fixed or modified,” or if you have an electrical problem nobody else can figure out.

To fix this problem, Hollingsworth simply took everything gently apart and put the two pieces back together again. We watched as he did this job in short order, but remember that he has a lot of practice (29 years to be exact, and we do mean exact). So, if you find yourself in need of instrumentation repair or upgrade, give Pomona Valley Customs and Bruce Hollingsworth a call. Heâ€™ll get your gauges â€œpointedâ€ in the right direction. Itâ€™s been a long time since this stock Ford cluster was new, and the tack has worn out. Getting an NOS tach is possible, but itâ€™s still 1967 technology. Thankfully, thereâ€™s a better way 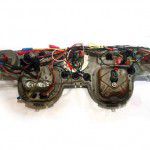 The rear of the cluster shows a mass of wires, but luckily none are in the way of the modifications necessary to infuse this classic with the latest technology. Held in with rivets, the stock â€œbridgeâ€ is removed from the face by driving the rivets out using a hammer and punch. This job is done as gently as possible because too much hammering can cause damage to the thin metal. 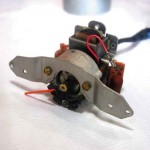 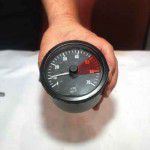 VDO has a long history of producing highly accurate and tough instrumentation. This tachometer carries on a tradition of fine instruments that started way back in 1920s Frankfurt, Germany. 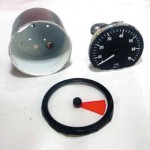 The first step is to disassemble the VDO unit. Once the rubber surround and clear face have been pulled off, one finds that the meter movement assembly is only held to the cup with screws. Taking it apart is not a problem. The VDO unit is made with integrated circuits and uses a pulse signal from the coil to trigger it, which is vastly different from the stock unit. 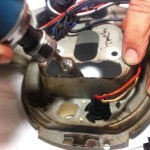 As expected, the VDO unit differs in design, so the back of the stock housing needs to be modified to allow the terminals to protrude through. 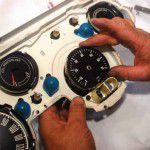 Additional modifications needed to be made to the lower edge of the tach face to allow it to fit above the idiot lights. This is also the time to test fit the tach so that it sits at the correct depth in relation to the speedometer. 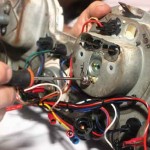 Once Hollingsworth has determined the correct standoff distance, he uses small bolts and spacers to firmly affix the new VDO unit to the stock housing. The stock tach face is glued to the new VDO unit using Permatex Right Stuff adhesive. It only takes a few dollops to form a tight bond. 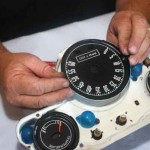 The adhesive is allowed to become tacky prior to mating the two pieces. With the VDO needle removed (it only requires a gentle tug to remove it) care is taken to perfectly align the old face onto the new VDO unit. Once the adhesive is completely cured, the needle is (gently) pushed into place. 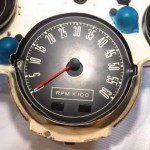 With the needle in place, youâ€™d never know that anything other than the stock tachometer was behind that face. 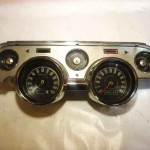 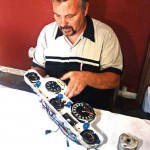