Trophy Queen – This Woodie Delivers the Goods in Style

If something needs to be done, it may as well be done with a little style. That was the thinking behind building this â€˜48 Chevrolet Fleetmaster Woodie owned by the Auto Club Speedway in Fontana, California. Having a lot of pomp and circumstance surrounding the winnerâ€™s trophy presentation has a long and storied history (mostly involving cute trophy girls giving the winner a kiss; itâ€™s a tradition we wholeheartedly support, by the way).

There is little doubt that NASCAR puts on a good show during their presentations, and Mike Yurick, vice president of operations for the AAA Speedway, figured what better way to add that than by building a real woodie to match the one on their Les Ricther trophy, which is presented to the winner of the annual Auto Club 400 NASCAR race. It was a great idea, and with help from Phil Harwood, an employee of the speedway, Yurick set about to do just that. A suitable car was found on eBay, and even though in Yurickâ€™s own estimation that car was â€œrough,â€ a deal was struck and after $16,000 changed hands, Yurick had his car. 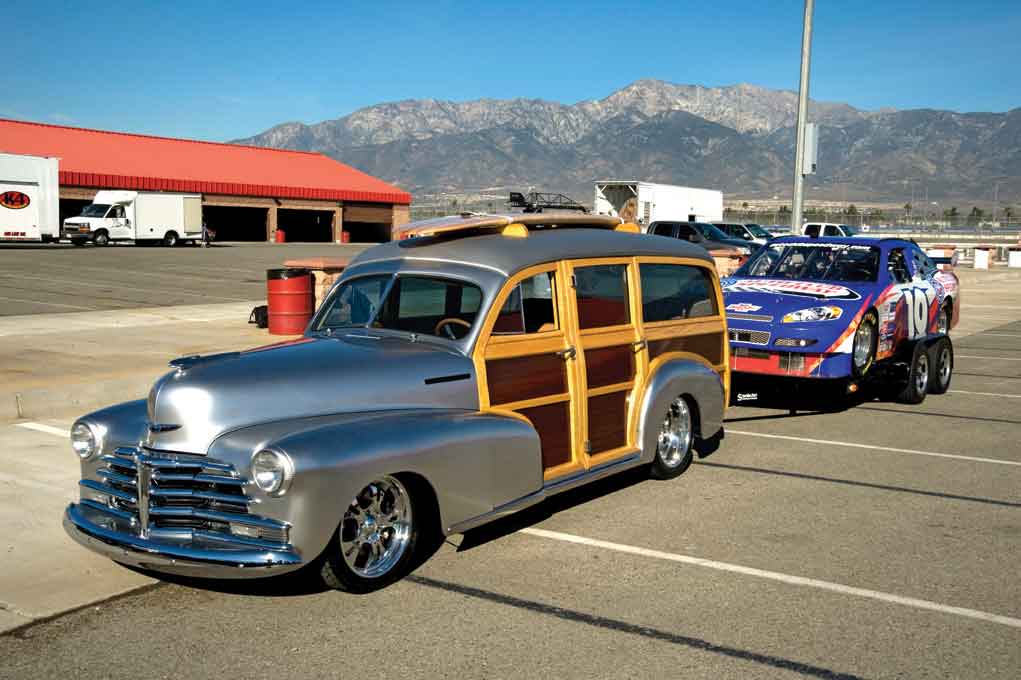 Equipped with a trailer, the AAA Speedway â€˜48 Chevrolet Fleetmaster woodie can tow around the Speedwayâ€™s own racecar or the winning entry.

Yurick wanted the vehicle to be able to take a few hot laps around the speedway, so he sent the frame to Las Vegas Rod & Custom in Las Vegas. In keeping with the high performance nature of the vehicle and its surroundings, the LVR&C crew placed an Art Morrison Engineering PROfile frame under the woodie. It features a Corvette C-6 front end with Morrison springs and â€˜Vette shocks and anti-sway bar. The rearend uses a Strange Engineering rearend that is equipped with a Posi unit and a high-speed-friendly 3.73 gear ratio. It too has C-6 shocks and Morrison springs. Bringing the woodie to a sure halt are front and rear Corvette C-6 brakes. Bringing in the style aspect, a set of cool five-spoke Boze Doons wheels (Front: 18 x 8, Rear: 18 x 10) were chosen for the woodie. 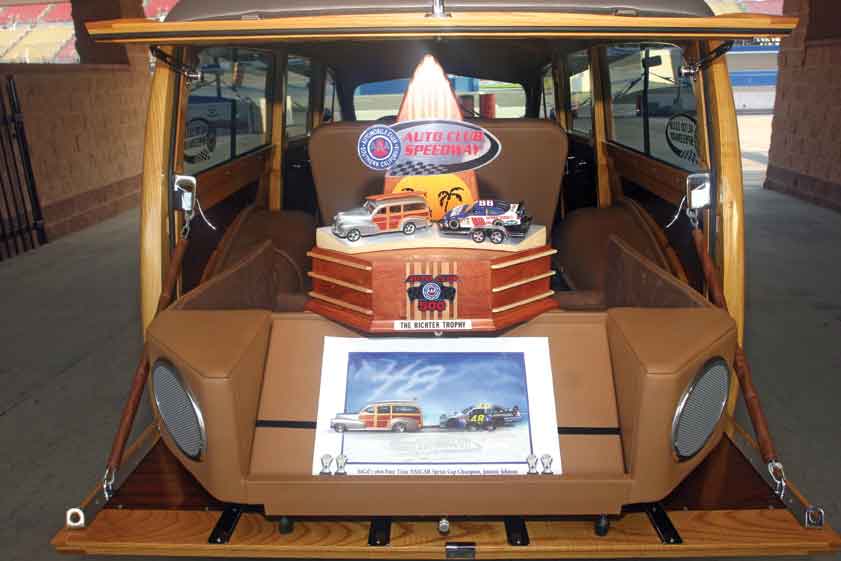 This beautiful woodie is the perfect vehicle (okay, pun intended) for displaying a smaller version of the Les Richter trophy.

Power is ably supplied with a Chevrolet 350/385-hp crate motor that has been upgraded with an Edelbrock 650-cfm carburetor and intake manifold. A set of Dynomax ceramic-coated headers has been paired with a stainless steel Borla exhaust system to get the burned fuel out of the engine, while a Billet Specialties air cleaner lets the fresh air in. A set of Billet Specialties valve covers and the Vintage Air pulley system complete the look. 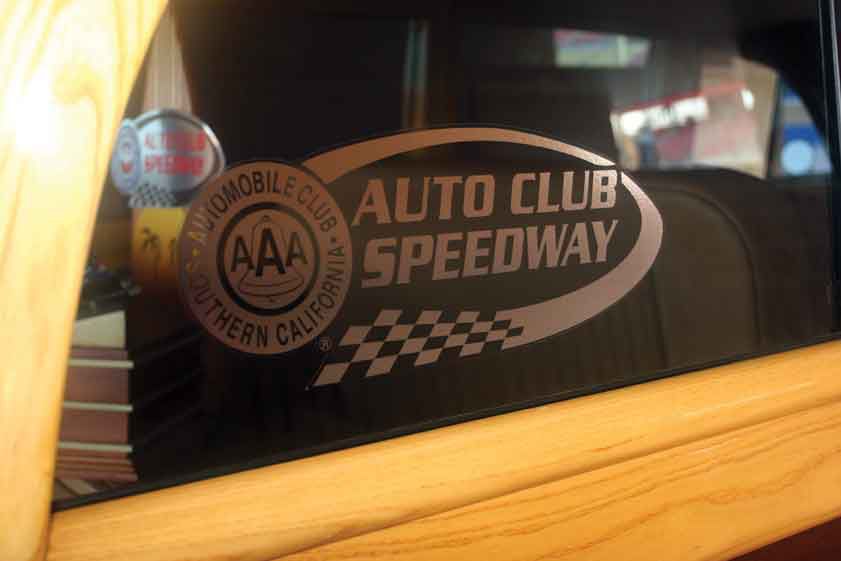 You have to hand it to the Auto Club Speedway, they do things in style.

Getting the power to the rearend is done with that all-American workhorse, the GM Turbo 400 transmission. It has been upgraded to take the heat with a B&M 3,000-rpm stall speed converter and a Moroso trans cooler. Thanks to Las Vegas Rod & Custom Driveshaft, a custom driveshaft finishes connecting the drivetrain dots. 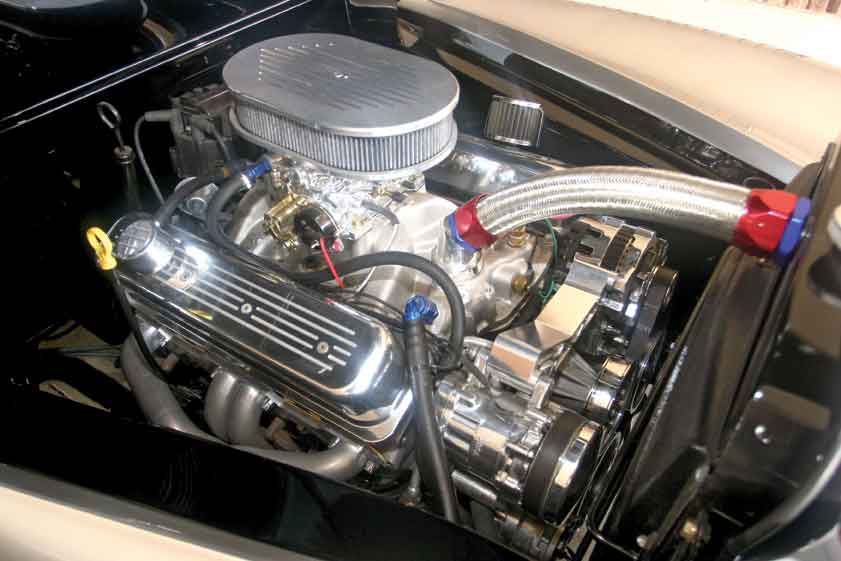 Powering the woodie is a Chevrolet 350/385-hp crate motor that has been upgraded with an Edelbrock 650-cfm carburetor and intake manifold. A set of Dynomax ceramic-coated headers pair with the Borla exhaust system, while a Billet Specialties air cleaner and valve covers and the Vintage Air pulley system complete the look.

Despite the $16,000 purchase price, Yurick did say that the car was rough, which necessitated plenty of bodywork by the crew at Rudyâ€™s Auto Body of Fontana, California. Yurick says some of that work involved extensive Bondo removal, lots of rusty body panel replacementsâ€”floor panels and near full reconstruction of the door jambsâ€”as well as the replacement and reshaping of various panels. Another item that had to be replaced was the firewall, which was modified to accommodate the new Chevy V-8. Rudyâ€™s also applied the new DuPont Chrome Effect paint 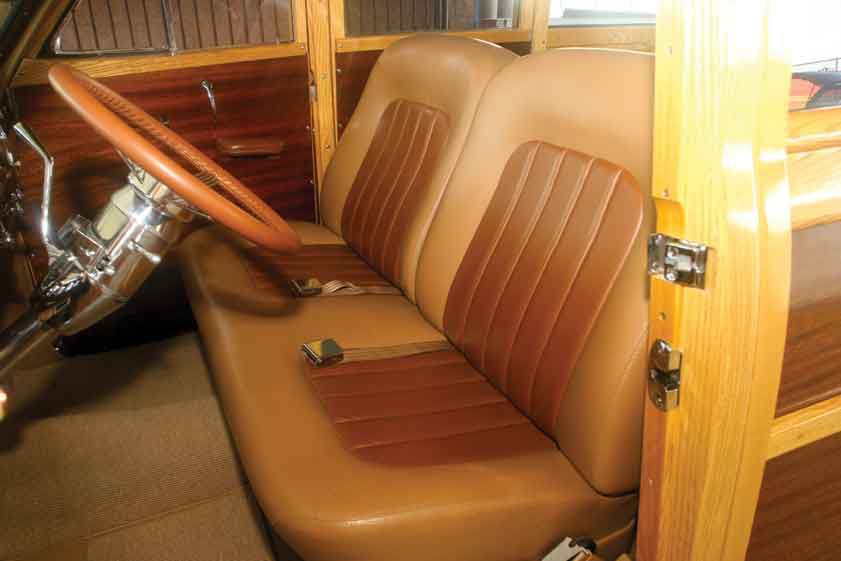 Since the stock wood on this woodie was more than 50 years old, complete wood restoration and installation was done by Ron Heiden Woodworks of Encinitas, California, to turn it back into the beauty it is today. Topping off the car perfectly was a new waterproof silver marine canvas top, though we arenâ€™t sure why it had to be waterproof; thereâ€™s no racing in the rain, is there? 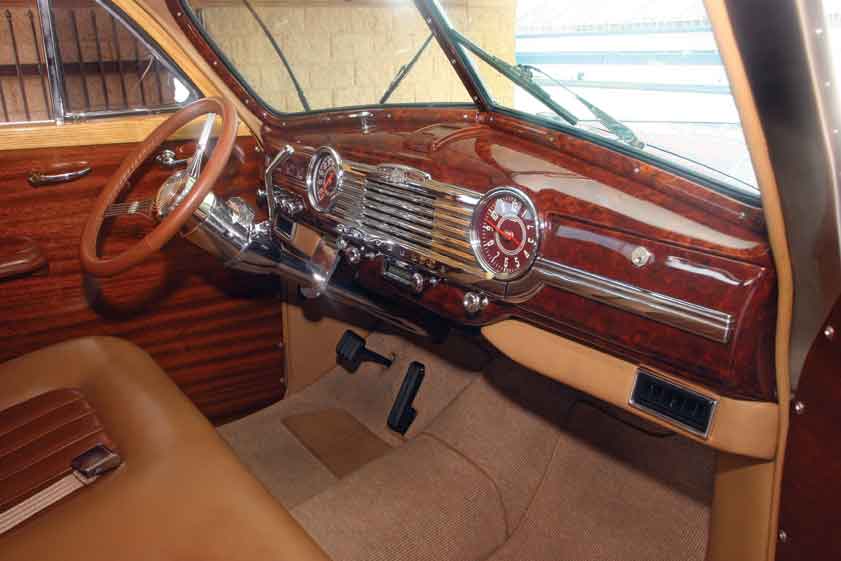 The original dash was beautifully refinished by Wildwood of San Bernardino, CA, and was filled with Redline retro-fit gauges, a Sony head unit and the vents for the Vintage Air air-conditioning system.

Of course, if it does rain, the interior of the woodie would be a great place to sit it out. Yurick chose one of the best interior guys around (and our old buddy) Ron â€œThe Stitcherâ€ Mangus, who heads up Mangus Interiors of Rialto, California. Mangus and his crew covered the Glide Engineering seats with two-tone tan leather. The Wheel Shop Classic banjo steering wheel, which sits atop an ididit tilt column, was wrapped with leather as well. Scheidecker Engineering installed the Pro-Comp Power window kit, while the carpeting is tan German square weave. 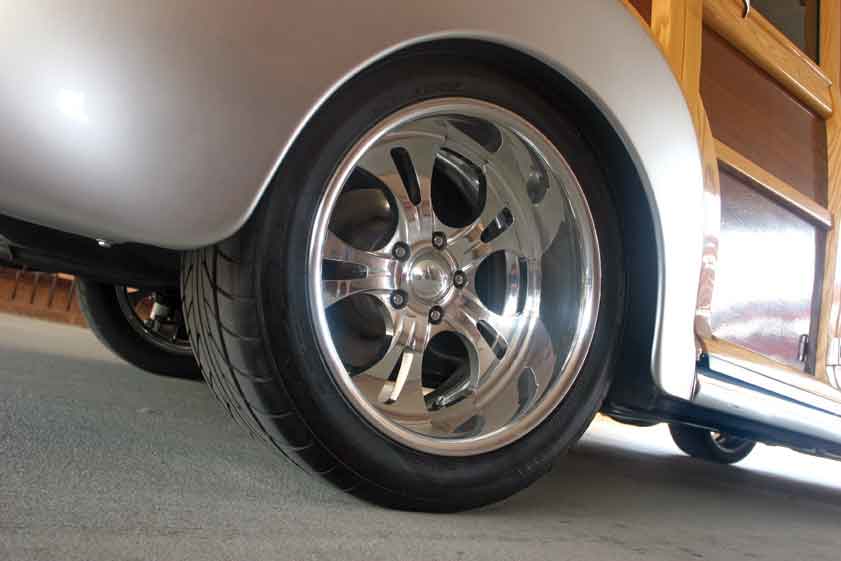 The dash is the original unit beautifully refinished by Wildwood of San Bernardino, California. It was filled with Redline Retro-Fit gauges, a Sony head unit featuring CD/Sirius/MP3 capabilities and the vents for the Vintage Air air-conditioning system. Scheidecker Engineering wired up the entire vehicle. 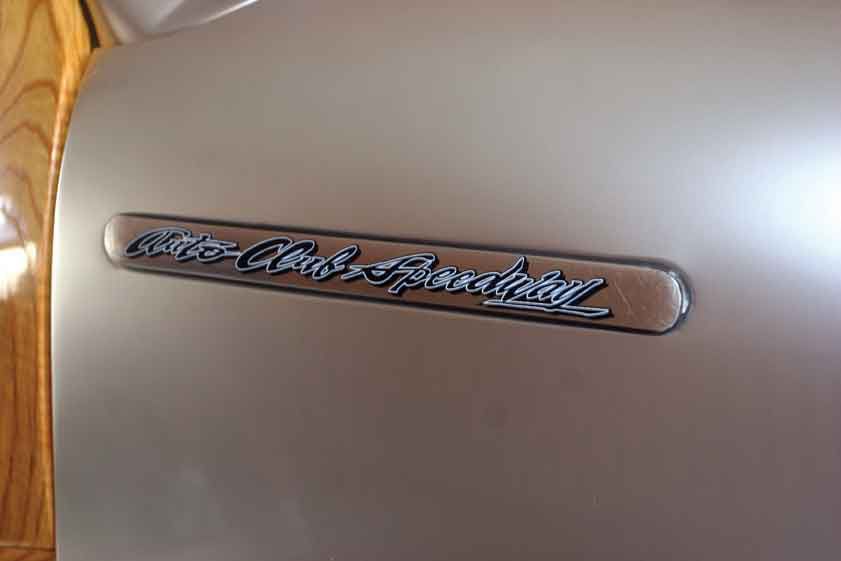 Subtle touches abound on the woodie.

But the most visible feature of the interior is the Mangus-made, slide-out unit in the back that displays a miniature version of the Richter trophy. The name is in honor of Les Richter, who was instrumental in getting the Speedway built for Roger Penske back in 1995 and was the number two man in NASCAR throughout the â€˜80s and â€˜90s. He also worked at the old Riverside Raceway for many years and was its general manager/president before leaving to join NASCAR.

â€œCoach,â€ as Richter was known, was a great NFL player in the â€˜50s for the LA Rams, and in fact was traded by Dallas to LA for 11 other players, a record that still stands to this day. Richter, who passed away in 2010, played both offense and defense in the same games and was a fierce competitor on either side of the ball. His jersey was number 48, and the woodie now sports a â€œCOACH 48â€ personalized license plate in his honor. 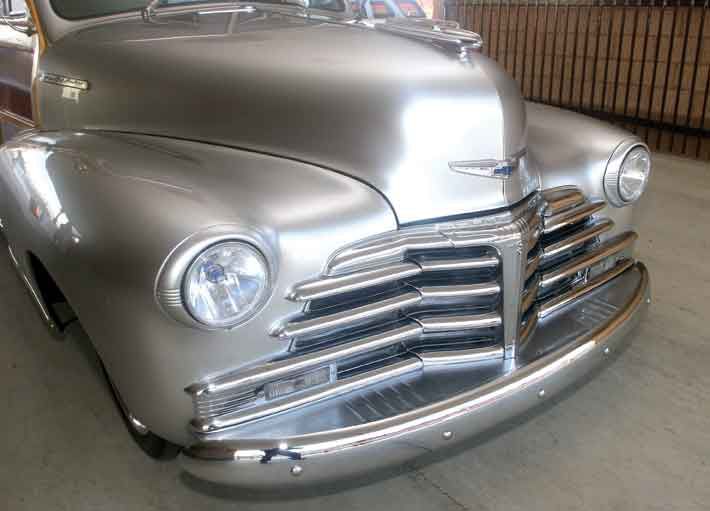 The woodie was in rough condition when purchased more than two years ago, but thanks to the crew at Rudyâ€™s Auto Body of Fontana, CA, who did the body and paintwork, the result is one fine car.

It took Yurick and his crew two years to build their trophy queen, and judging by the response the car gets when tooling around the track at presentation time or when itâ€™s displayed at shows, it would seem that the AAA Speedway has a winner on its hands.