Too Cool for School: This Camaro Gets High Marks

Too Cool for School: This Camaro Gets High Marks

When Dave and Mike Little first envisioned a car for Mike to drive to school, their first thought was that building a Camaro would be perfect. It would be something that they could do together, and when finished, it would give the younger Little a cool ride. While they did in fact build this sweet 1968 Chevy Camaro, things didn’t turn out quite like Mike had planned. Even getting it back to their Granite Bay, California, home turned out to be a chore. On the way back from Seattle (where they had bought the car from the original owner’s neighbor), their motor home and trailer had to be pulled out of a snow bank in Shasta, California…… 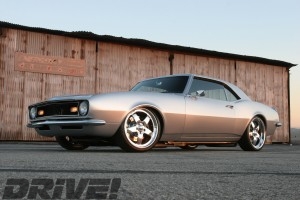 Even with a purchase price of only $5,000, the pair knew that there was going to be a lot of work in their future, not the least of which was straightening out the body. Thanks to the harsh Washington winters, the pair needed Roseville Rod and Custom in Roseville, California, to replace quarter panels, the passenger door skin, the trunk floor pan, and the driver’s side floor pan and cowl panel. While they were at it, they had the bodylines sharpened and the door locks, running lights and gas filler door shaved, and Roseville even smoothed out the firewall.

When the last of the welds were cool and smoothed out, Roseville’s own Jason Haskins (of Jason Haskins’ Hot Rod Shop) applied the House of Kolor Orion Silver base and the custom-mixed House of Kolor rally stripes. The headlights utilize xenon bulbs, while the stock rear taillight housings now have LEDs providing the light. 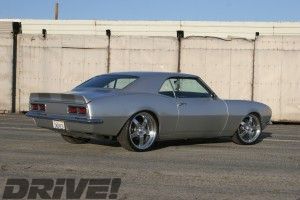 While the body had been off, the frame received its own attention. Though the frame is stock, it has been equipped with a host of Air Ride Technologies suspension pieces. An ART Air Bar 4-link holds the Chevy 10-bolt rearend aloft using Air Ride Technologies Shockwaves. The 10-bolt has been enhanced with an Eaton posi unit and road worthy 3.73 gears. With its IFS style front suspension, all that was needed there was another set of Shockwaves, though Air Ride Muscle Bar anti-sway bars have also been added. Bringing the Camaro to a safe stop is thanks to the Classic Performance Products disc brakes that have been installed front and rear. The drilled and slotted front units are 13 inches, while the rears are 11s. 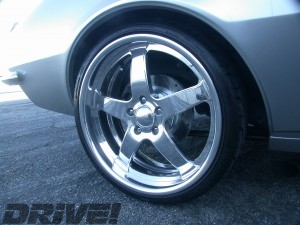 Good handling and brakes are a real concern as the 2006 Chevy LS2 produces plenty of asphalt treachery. Built by Street & Performance of Mena, Arkansas, the 6-liter engine features S&P headers, and the company’s pulley system and air cleaner as well. With the MagnaFlow exhaust system in place, the horsepower rating is a full 450. Putting that power to the rearend is done with a 4L60E transmission and a custom shaft by Driveline Services of West Sacramento, California. 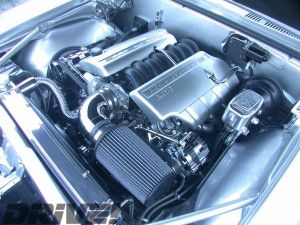 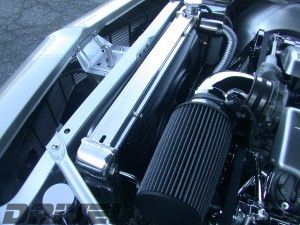 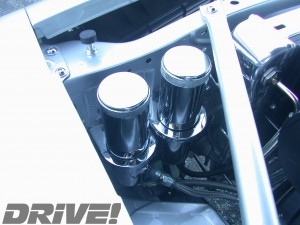 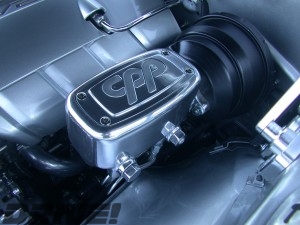 Though the car can actually be called subtle, certain pieces, such as these Fesler hood hinges, stand out on the style scale.

As all business as the rest of the car is, the interior is just as trick, not to mention comfortable. Done by Barry Ward at Ward Auto Interiors of Orangevale, California, the interior is as it should be for a muscle car: black. The seats (and door panels for that matter) are custom-made units that feature black leather, black suede and are enhanced with cool Stingray inserts. Another custom touch is the dash, which though stock, holds an array of Auto Meter gauges in a custom insert. A Classic Industries steering wheel has been added, while the stock floor shifter has been modified to work with the overdrive tranny. Getting cool is easy thanks to the Vintage Air air conditioning system, while the wiring is a combination of a Painless Performance mated with a Street & Performance harness for the LS2 engine.

The interior can only be described as muscle car black. 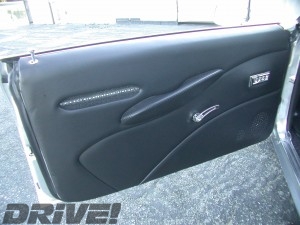 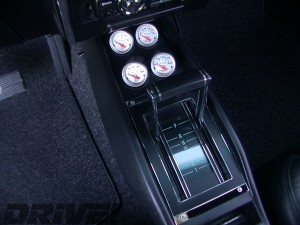 Auto Meter gauges also adorn the center console, and notice that the stock shifter has been modified to work with the 4L60E transmission.

Great tunes are vital to a great muscle car, so the Littles installed a Pioneer head unit (with Bluetooth and iPod interfaces) that is pumped with twin MTX audio amplifiers that have been mounted in the trunk. A pair of Crystal Audio speakers, along with the two, 8-inch Crystal Audio subwoofers in the front kick panels, gets the waves out to waiting ears. 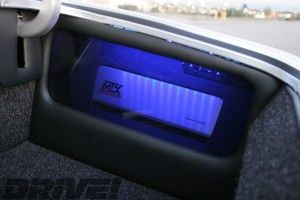 So, the Chevy was originally going to be built as a daily driver for Mike, who was 16 at the time the pair bought the car. As the two-year-long build continued however, and the Camaro progressed, it became apparent it could not be Mike’s high school car, so Dave had to buy him a different car for his daily driver. That turned out to be bad news for the younger Little, but even worse for the rest of the show crowd as this Camaro has been named Best Camaro (Goodguys Pleasanton and the Roamin’ Angels Car show) as well as garnering many other accolades.

Now if the younger Little can just convince his dad to let him drive it to college.