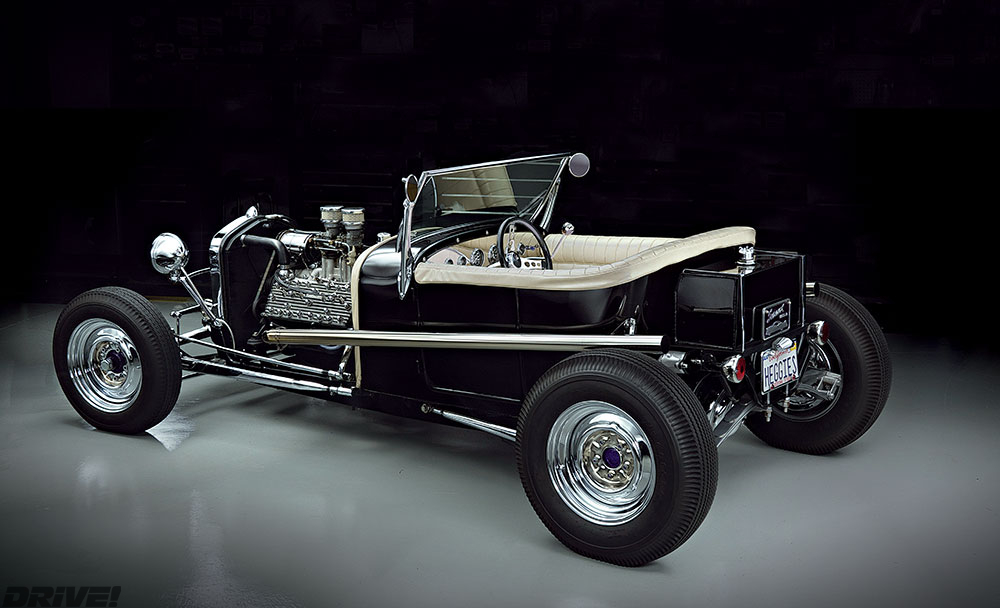 When a car has been owned by different members of the same family for nearly 8 decades it can truly be called a “family car.” Such is the case with Anji Ramsey’s 1922 Ford Model T Roadster. Acquired by her grandfather in the 1940s, the T was passed from relative to relative for decades to come. After short time (relatively speaking) adrift of the family, Anji brought the estranged car back to the fold and back to its former glory. Just as the hot rodding scene began to emerge after the end of World War II, Anji’s grandfather Marlin Hegendeffer found himself in the thick of the movement. Chrome plating your hot rod or motorcycle parts was suddenly in style in the late 1940s. Hegendeffer’s Vallejo Electroplating company was the epicenter for all things shiny in the burgeoning East San Francisco Bay Area hot rod scene. One of Hegendeffer’s friends wanted to chrome out his newly acquired motorcycle, but couldn’t afford the job so he traded his hot rod for plating. At least that is what Heggie, as he was known to family and friends, told his wife. There is a long lingering family rumor that he actually paid $600 for the non-running car. 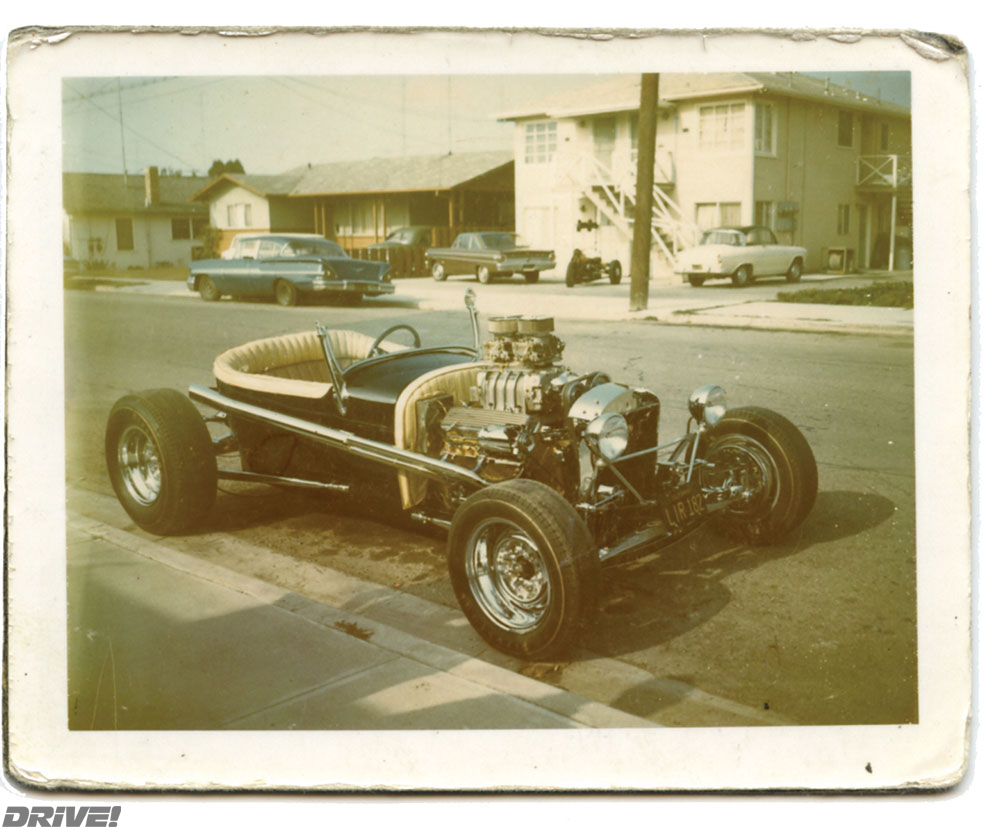 The previous owner was an aviation enthusiast and had fitted the roadster with a Hispano-Suiza airplane engine. Heggie never could get the Spanish powerplant to run right, so he did what any self-respecting hot rodder would do. He tore the car completely down, chrome plated everything he could, made major changes to the frame, and made it his own.

He gave the 1925 Model T truck frame the Z treatment and kicked the chassis up over the rear to accommodate a freshly-chromed banjo rear end and buggy springs. The story goes that Heggie used ½-inch steel from an armored car to box the rear frame members to assure rigid mounting points. He then built a hopped-up bored-and-stroked 297 cubic inch Ford Flathead V8 and mated it to a 1939 Ford top loader transmission. Before the 1927 body was fitted to the frame, family members report that it was painted a deep, dark purple that appears black in the old monochrome family photos. The car rode on some early split reversed and chromed steel wheels. In fact, this car might have been the first to use that style of wheel.

As the decades passed, the old hot rod decayed and at one point in the late 60s the T ended up in Anji’s parents’ garage as nothing but a pile of parts. Heggie is also thought to have been one of the first to upholster the outside firewall for an extra custom feature on his hot rod. Once the rod was roadworthy, Heggie convinced someone at the DMV that the hot rod was a 1922 Model T and the car has carried that moniker on the registration slip ever since. As soon as the car was road-legal, Heggie’s extensive chrome plating work ran him afoul of the law. The chrome plated gas tank was deemed “too reflective and a nuisance” by some sensitive-eyed protector of the peace, so it was quickly re-coated in matching paint. The freshly completed car was shown at several local hot rod shows, most notably at the Cal-Neva Roadster Association 2nd Annual Roadster Show held in Vallejo, California in May of 1950. 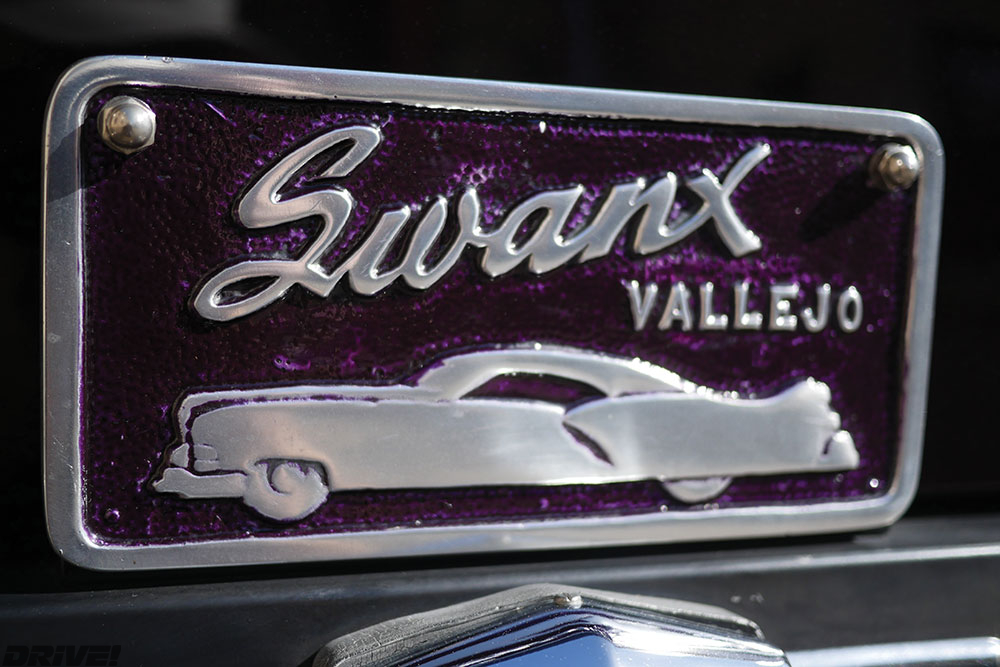 The T has been owned by Swanx Car Club members twice, once in the 50s by Anji’s Great Uncle Rick and now by her.

As the name implies, the Timing Association was bent towards racing and soon Heggie and the T took to the track and the dry lakebeds. A September 1950 Hot Rod Magazine article states that the T ran 89.6 MPH on a dry lake just north of Reno, Nevada.  Heggie was not pleased with the results, so the flathead soon sported a S.Co.T. blower, an Offenhauser manifold, an Isky ¾ race cam, Jahns pistons and a Mallory ignition. Running with this setup in 1955, Heggie and the T were photographed drag racing at the Kingdon Airfield in Lodi, Calif. in a 97 MPH pass. After he campaigned the car on the track and the show circuit for nearly a decade, Heggie sold the T to his brother-in-law, Rick Pilling, in the late 1950s. Rick was one of the original members of the Swanx Custom Car Club in Vallejo. Rick and his wife Eileen continued to show the car for many years and received coverage in several magazines, making the cover of the July, 1959 issue of Rod Builder and Customizer. 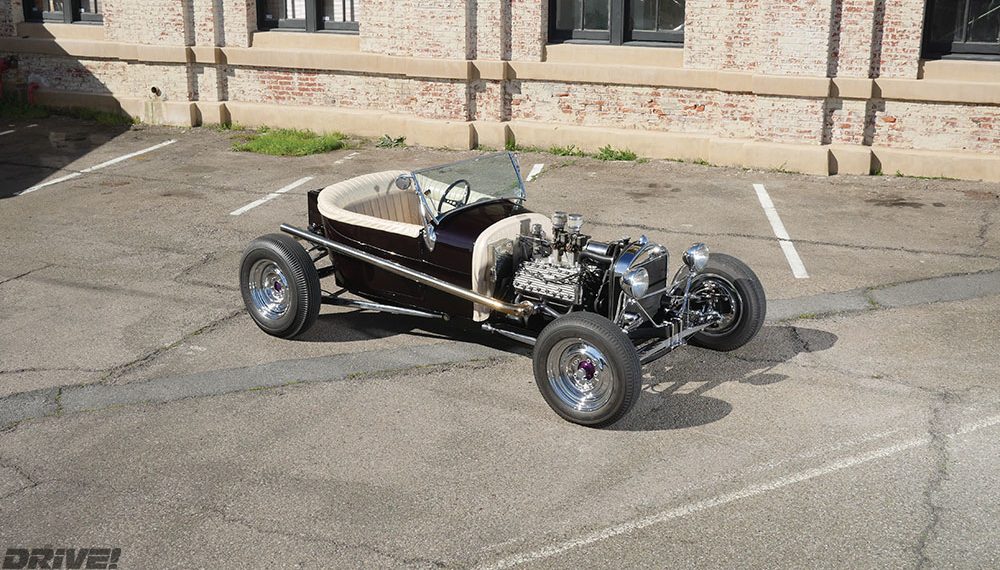 As the decades passed, the old hot rod decayed and at one point in the late 60s the T ended up in Anji’s parents’ garage as nothing but a pile of parts. Her Uncle Tommy eventually rescued the disassembled hot rod and set about updating its look and vintage powerplant. The old-fashioned flathead was replaced with a supercharged Cadillac 390 pulled from a drag boat. The nearly 20-year-old purple color was covered with a white and psychedelic ribbon paint job that was quite popular at the time. The chromed 1940 Ford rear end was replaced with a 1955 Chevy unit chrome-plated at Heggie’s shop. Tommy showed the refreshed hot rod in the Oakland Roadster Show for years, finally winning his class. Roadster Show rules state that once a trophy is awarded, major modifications must be effected before the car can be shown again. Tommy was not interested in changing up the configuration, so he sold the car out of the family in 1972. 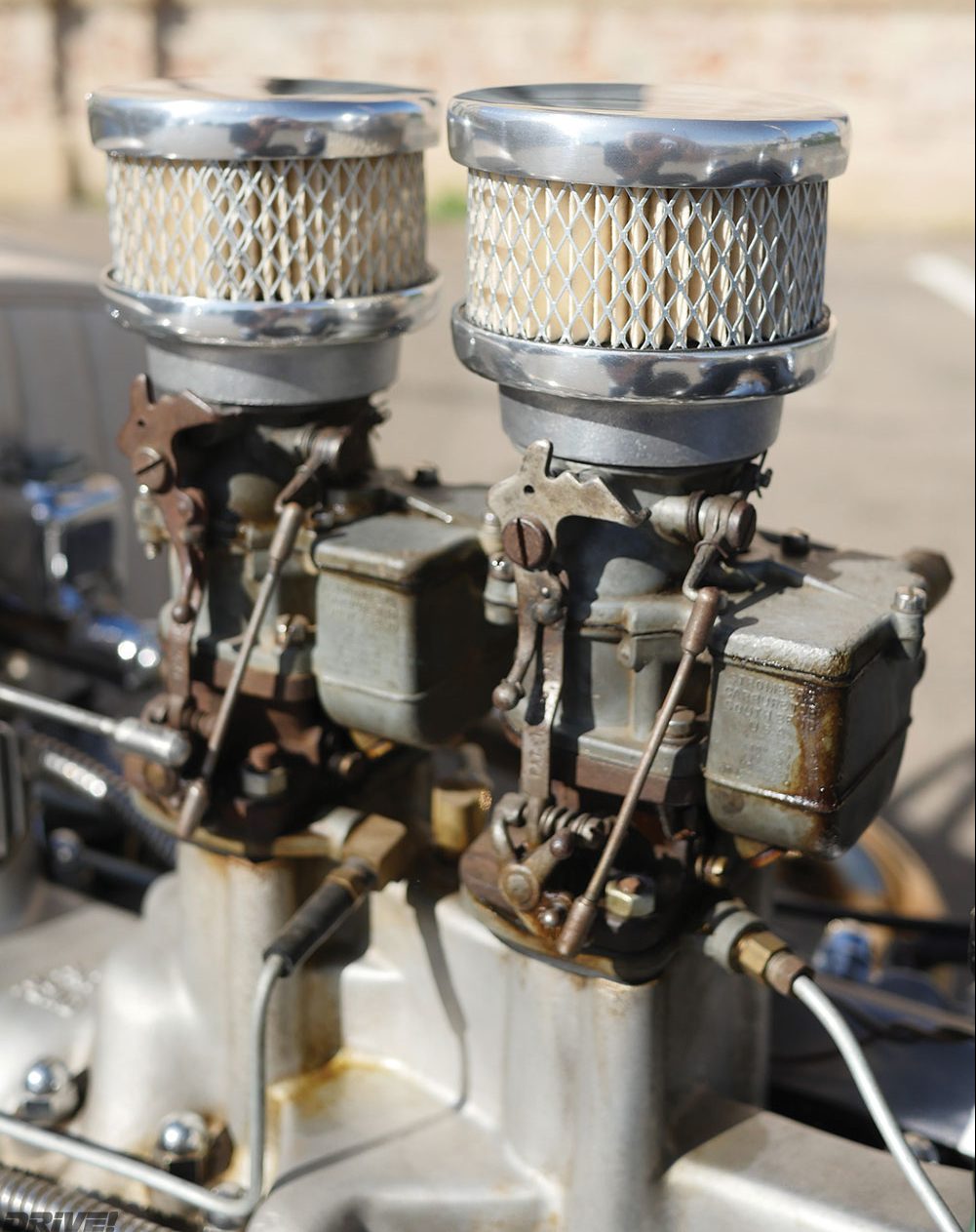 As the years went by not too many in the family gave a thought to Heggie’s old hot rod, until Anji’s parents purchased a 1940 Ford in 1994 and started attending car shows with it. Anji tagged along for the ride and was soon wondering what happened to the T that was with the family for so long. She began asking fellow show attendees if they had ever seen a similar car. For a year and a half the answer was always “No.” Finally someone slipped her the name of a fellow that had recently retired from the SF Bay Area to the Sierra Foothills and drove a similar hot rod. Luckily, a call to information revealed his listed number and Anji called immediately. As the slightly bewildered retiree answered that he did indeed own a 1927-bodied hot rod resting on a zeed 1925 Model T truck frame that was registered as a 1922 Model T, Anji’s heart raced. She relayed the story of the T’s family ownership and asked if he would be willing to sell to the builder’s granddaughter. The answer was a heart stopping No. But that didn’t discourage Anji. Over the next year and a half, she called the owner almost weekly. Eventually, she softened his resolve and finally Anji bought Heggie’s old hot rod and brought it back to the family. 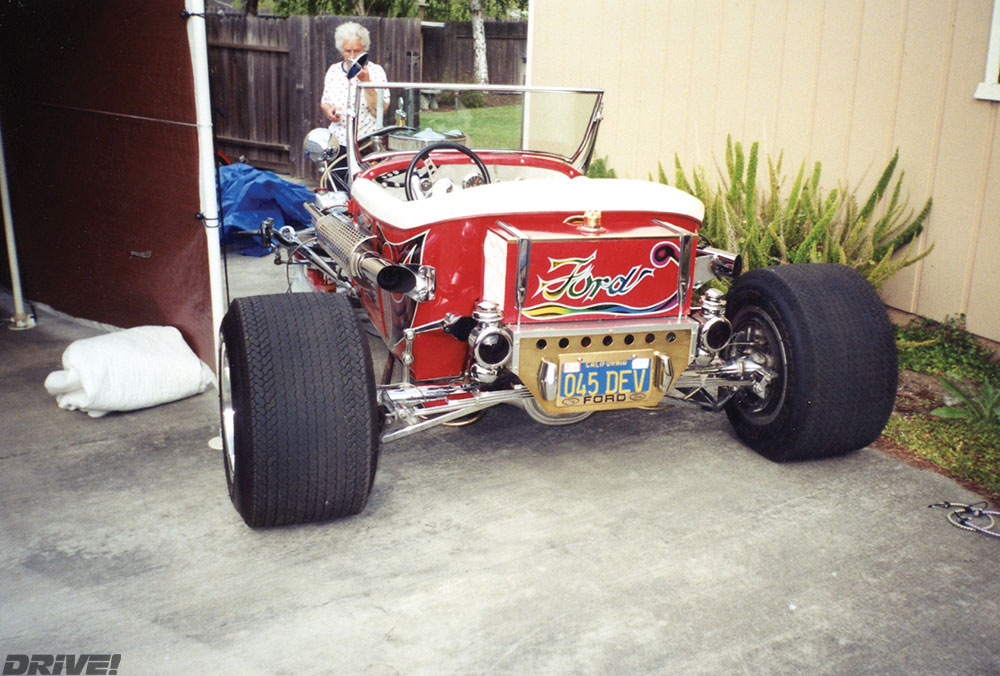 While the hot rod had been covered with an 80s-era red paint job, the original underpinnings remained and Heggie’s original chrome plating from the 1940s still gleamed bright. Anji enlisted current Swanx Car Club member, Gunar Hansken to return the T to its late-40s configuration. The two scoured family albums and old hot rod rod magazines for pictures of the car. From those references, measurements were taken, plans drafted up, and the car was stripped down one more time.

The answer was a heart stopping No. But that didn’t discourage Anji. Over the next year and a half, she called the owner almost weekly. 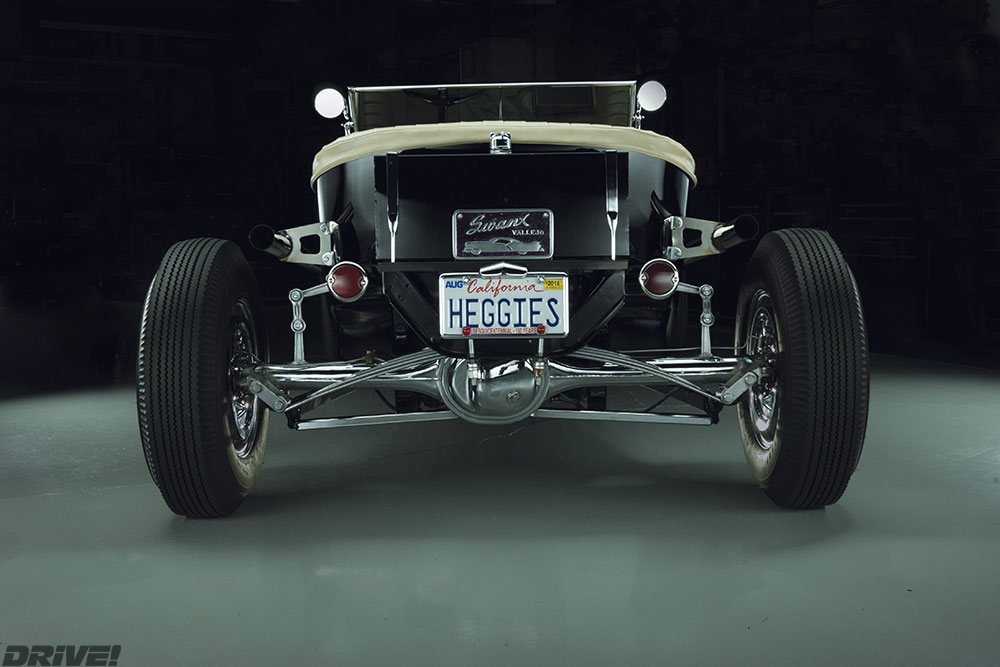 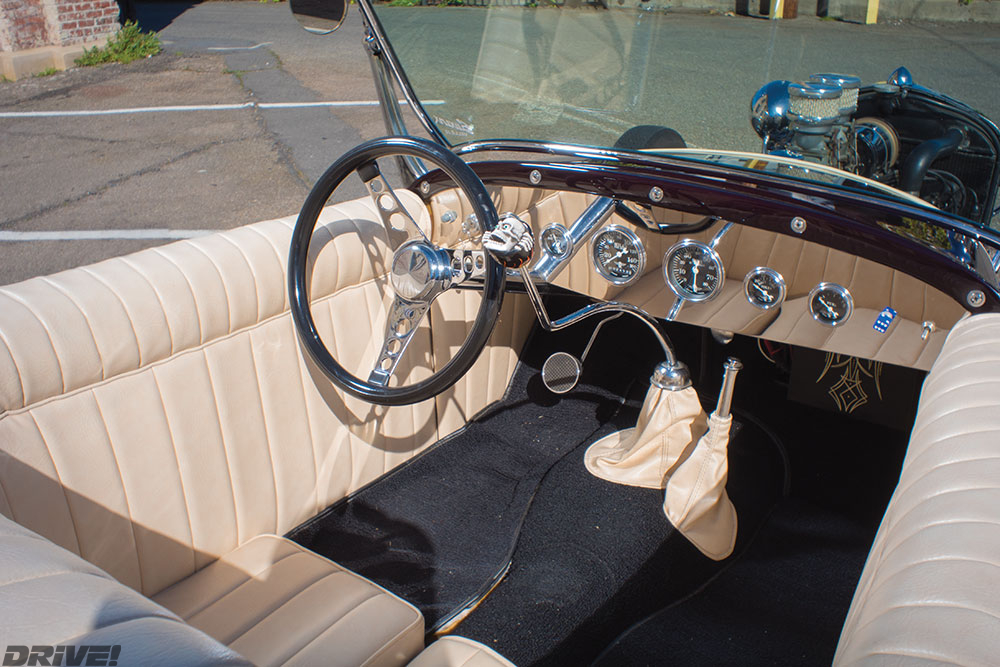 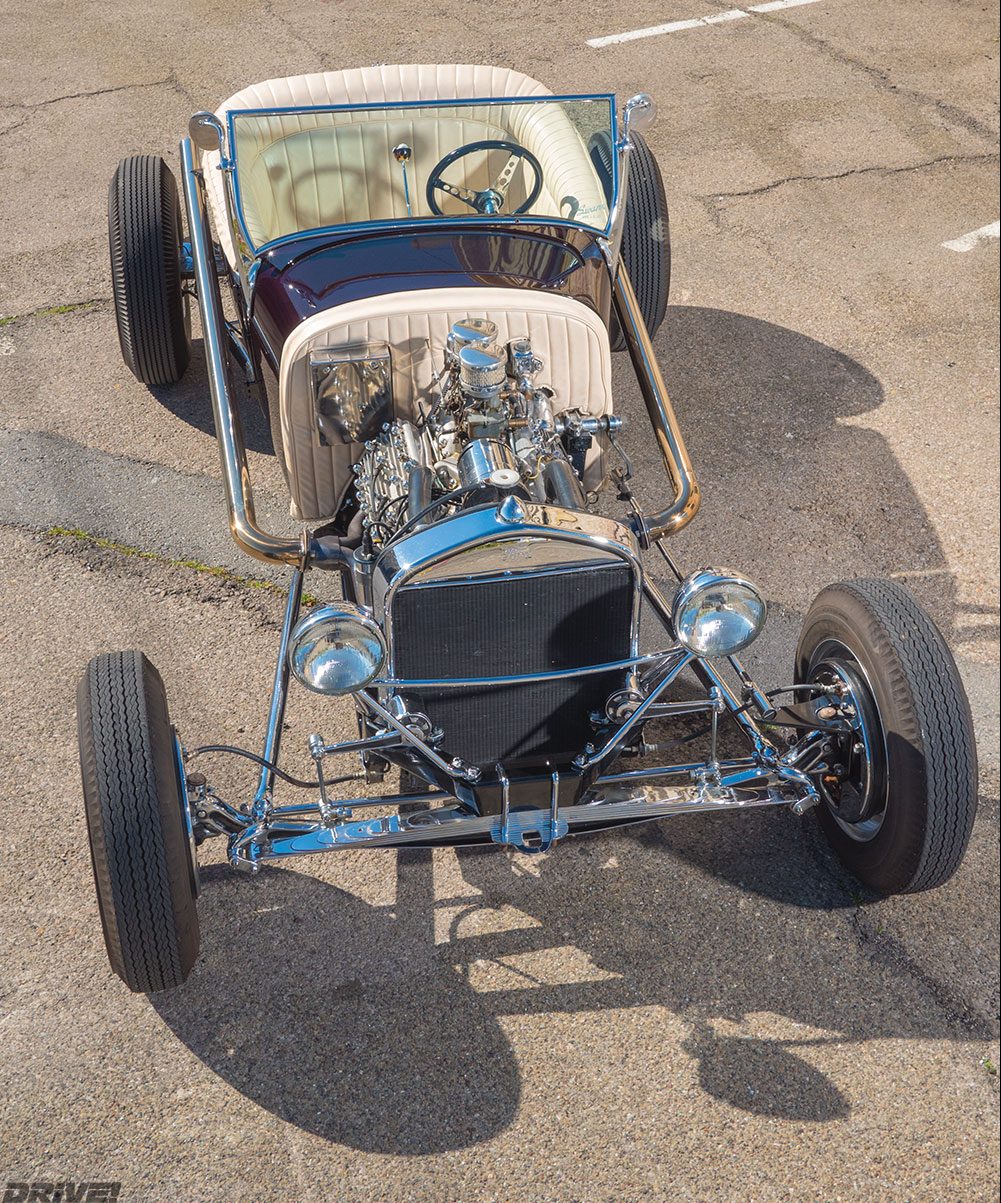 Anji traded the Caddy motor to Gunar for a running 1952 255 cubic inch Ford Truck flathead. Two Stromberg 97’s atop a Thickston intake capped the flathead. New stainless side pipes were mated to block hugger headers that had been reversed in their flanges to point out and away from the block. A Ford C4 auto trans and 1940 Ford shifter were fitted and connected to the original 1955 Chevy rear end. While drilling holes in the rear of the frame for modern brake lines Gunar confirmed an old family rumor, the rear of the frame was indeed boxed using ½-inch armor plate. Several drill bits gave their lives in testament to the strength of the plates. Up front the original Heggie-chromed 1940 Ford axle remained in place. The wide and modern wheels and tires were replaced with reverse chrome steelies and pie crust black wall tires fitted. Recalling family stories of the deep, dark paint color Anji had Manuel’s Auto Body in Vallejo mix a dark purple that appears black under all but the brightest of sunlight. Abel’s Upholstery recreated the snap-in seats, bucket surround and firewall panel in stunning cream. 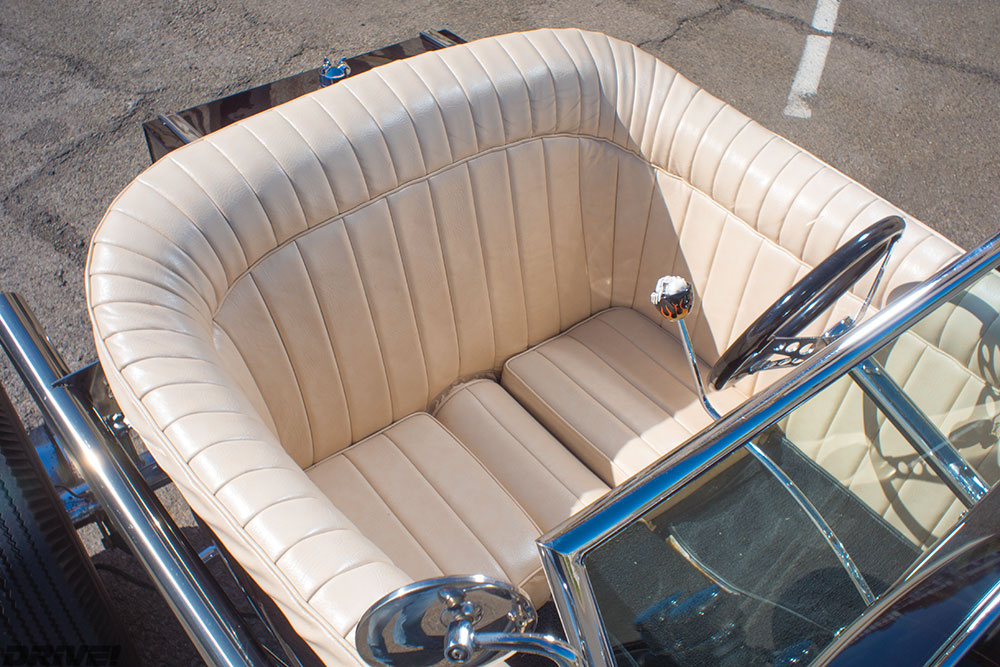 When the 18-month restoration was complete the little family car was put back on the road and shown off. Multiple awards from a wide variety of shows followed. A double legacy, car and member, Anji was asked to join the Swanx car club that her great uncle had helped create with the T many years ago. Upon becoming a member, the hot rod and Anji moved a step closer to their history. Heggie passed away when Anji was just two years old, so this project has really connected her with her grandfather and brought back lots of good memories for other family members. Anji drives the car all over Northern California, showing off the still-pristine chrome plating her grandfather applied in the late 1940s and sharing the T’s history. This time the car will stay in the family as Anji never plans to sell it and will make sure it goes to a family member once she is gone. Everyone is sure Heggie would have approved.

When the 18-month restoration was complete the little family car was put back on the road and shown off. Multiple awards from a wide variety of shows followed. 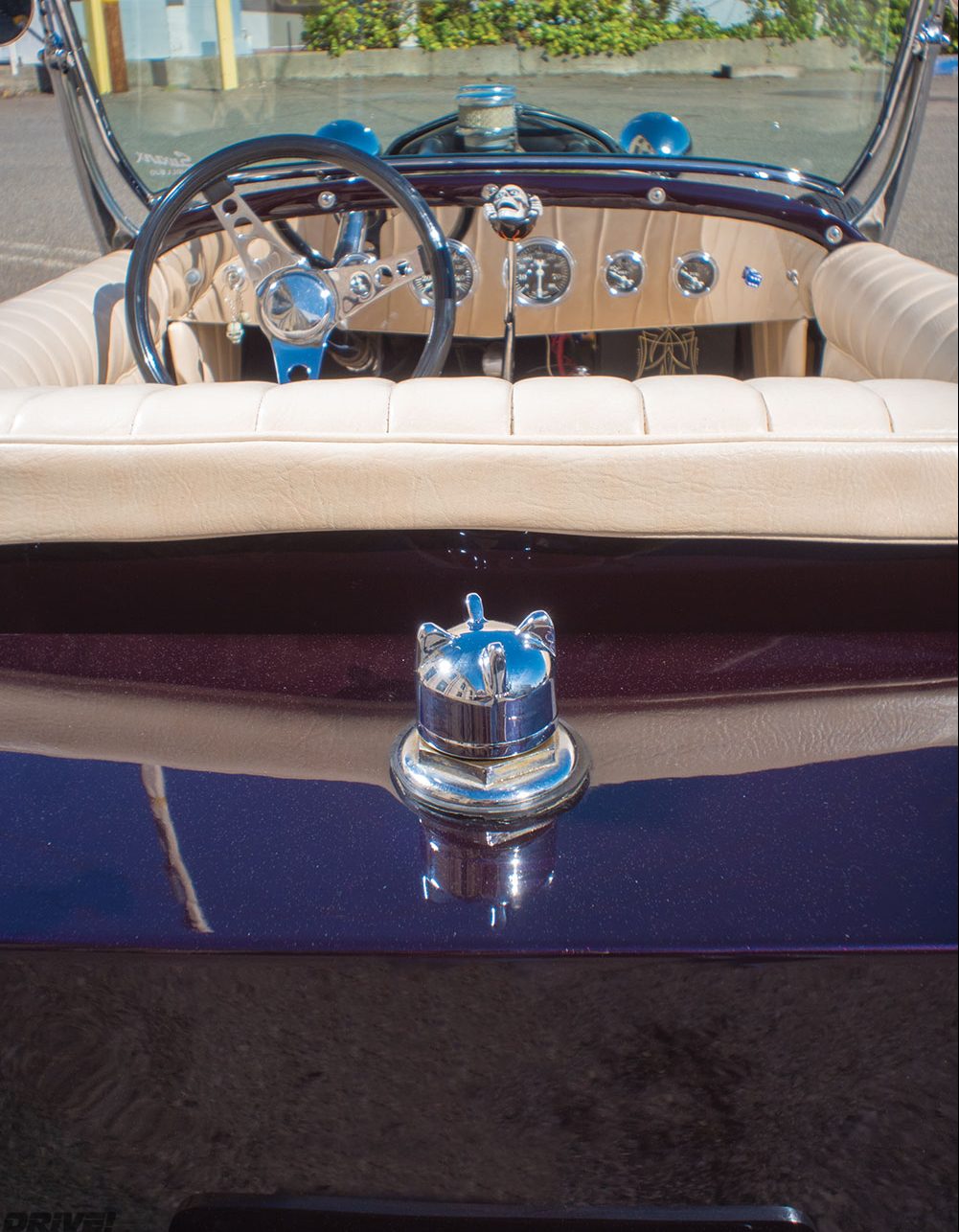