Almost half a century old, improving the handling of the 1964-67 GM A-Body isn’t particularly difficult. Without as much as a front anti-sway bar, the setup on our ‘64 Chevelle mule speaks for itself, leaving plenty of room to work with. Rather than give it a moderate makeover, we jumped at the opportunity to upgrade handling with a gStreet coil-over conversion from Chris Alston Chassisworks.

The actual VariShock coil-overs in the gStreet system are loaded with modern amenities like upper spherical ball stud mounts and lower spherical bearings, about as common in 1964 as a household with high-def satellite television. Adjustability is another of the VariShock’s strong points, boasting 16-position single- or double-adjustable valving along with 4.25 inches of travel and choice of 400 to 75 lb-in spring rates. For the fans who prefer to ride on air, Chasssisworks can provide a VariShock air spring with the gStreet conversion.

Chassisworks doesn’t stop with tossing in a set of coil-over with brackets and calling it a day. The upper control arms are replaced with tubular steel arms featuring billet pivot straps for increased strength and urethane pivot bushings for better longevity. The lower control arms get the same tubular steel/urethane pivot bushing treatment, although it gets the addition of screw-in ball joints. Revamping an entire front suspension isn’t typically an afternoon job, so we headed up to Chris Alston Chassisworks in Sacramento to see what it takes to install the gStreet coil-over conversion. 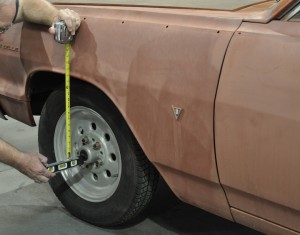 Prior to installation, we measured from the center of the wheel to the fender lip on the driver and passenger sides of the car to establish a baseline ride height. 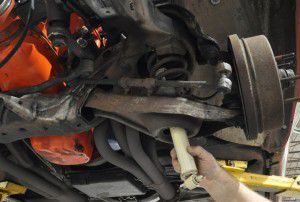 With the car safely supported by the lift, the shock’s upper stem and lower crossbar are unbolted and the shock is removed through the opening in the lower control arm. 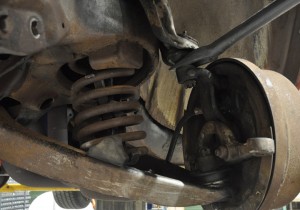 Next, a spring compressor is used to safely hold the spring under tension while the three spindle joints are separated and the spindle is removed. Because we are replacing the factory drum brakes and spindle, the brake line was simply disconnected and the brakes removed with the spindle. 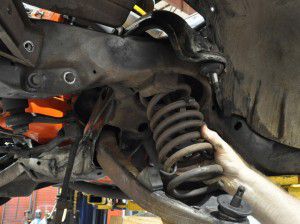 With the spindle and brakes out of the way, the coil spring can be easily removed. The spring is storing a lot of energy at this point, so use caution. 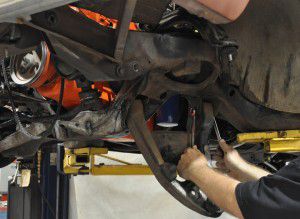 Remove the two lower control arm bolts and remove the control arm. The long tube headers on our small-block had to be removed for clearance to take out the rear bolt. 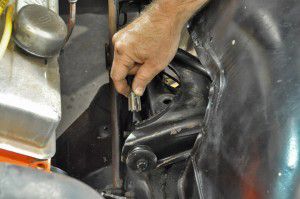 As we unbolted the upper control arms, the alignment shims were placed into bags and marked to keep them for installation of the new Chassisworks gStreet arms. The car will still have to be professionally aligned, but the existing shim stack will be close enough to get the car to the alignment shop. 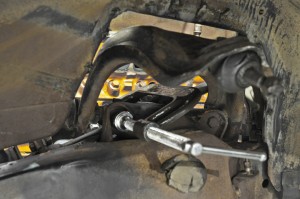 The upper arm mounting bolts have to be pressed out because the steering shaft prevents easy removal of the arm. We used a simple C-clamp, pressing against the end of the bolt, and a large socket placed over the bolt head.

The gStreet arms are shipped completely assembled and have a gray hammer tone powder coat finish. This exploded view shows off the billet pivot shaft and sleeved polyurethane bushings. 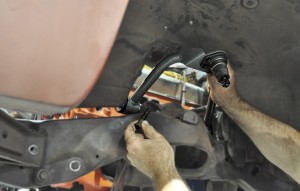 The lower arms also benefit from the stiffer polyurethane bushings and feature a welded crossbar to strengthen the arm. 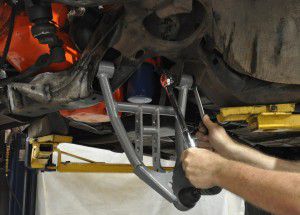 Next, we bolt the lower arm to the vehicle using the factory hardware. Once the bolts are correctly torqued, the headers can be reinstalled.

The shaft of a damper compresses and rebounds. The gStreet coil-over conversion provides tune-ability for both with its optional QuickSet 2 valve system featuring dual adjustment knobs that independently control bump- and rebound-damping stiffness of the shock. Dual arrow symbols engraved into the shock body demonstrate the function of each knob. There are 16 specific adjustment positions for each knob, with a total of 256 unique combinations possible. Detailed shock and spring tuning guides are included with each.

Sound like overkill? If you’re planning on using/beating on a suspension in a track environment, it’s not. If the front left of the car pops up too quickly coming out of a right turn, for example, the rebound can be adjusted to compensate for it. Add that to the flexibility coil-overs offer, like the ability to corner weight and change ride height, and you’re left with a lethal combo on track days.

Stay tuned for Part 2 of the step-by-step process!