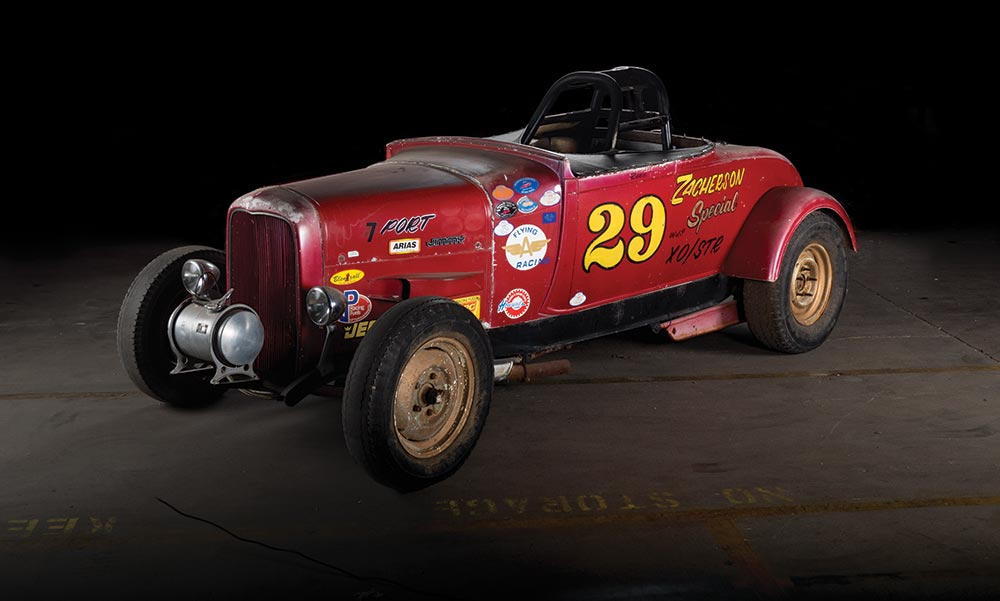 Fashion trends come and go in a flash. The must-have outfit for spring is no longer acceptable come fall. The same can be said for engine choices at Bonneville, although the trends on the salt follow a much longer cycle. The history of land speed racing at Bonneville is also a history of the highest performance engines available at the time. Interest in land speed racing was huge in the ’50s and ’60s, with advancements in automotive technology pushing records higher and higher. By the mid-’70s the automotive world shifted emphasis from performance to economy, and this malaise had crept into the scene at Bonneville. Participation dropped off to all but a few die-hards running their cars using the latest technology. Fewer still looked back in time to nearly forgotten engine designs. When Zeke acquired the Bonneville veteran roadster he became one of those few.

THE HISTORY OF LAND SPEED RACING AT BONNEVILLE IS ALSO A HISTORY OF HIGHEST-PERFORMANCE ENGINES AT THE TIME.

Using vintage technology can result in records set and held. 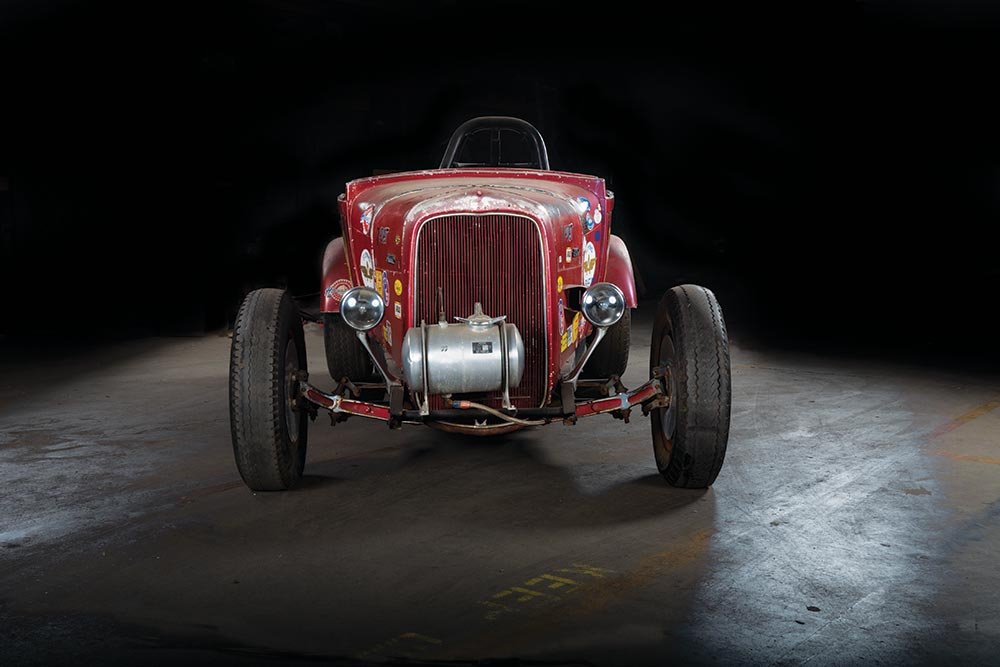 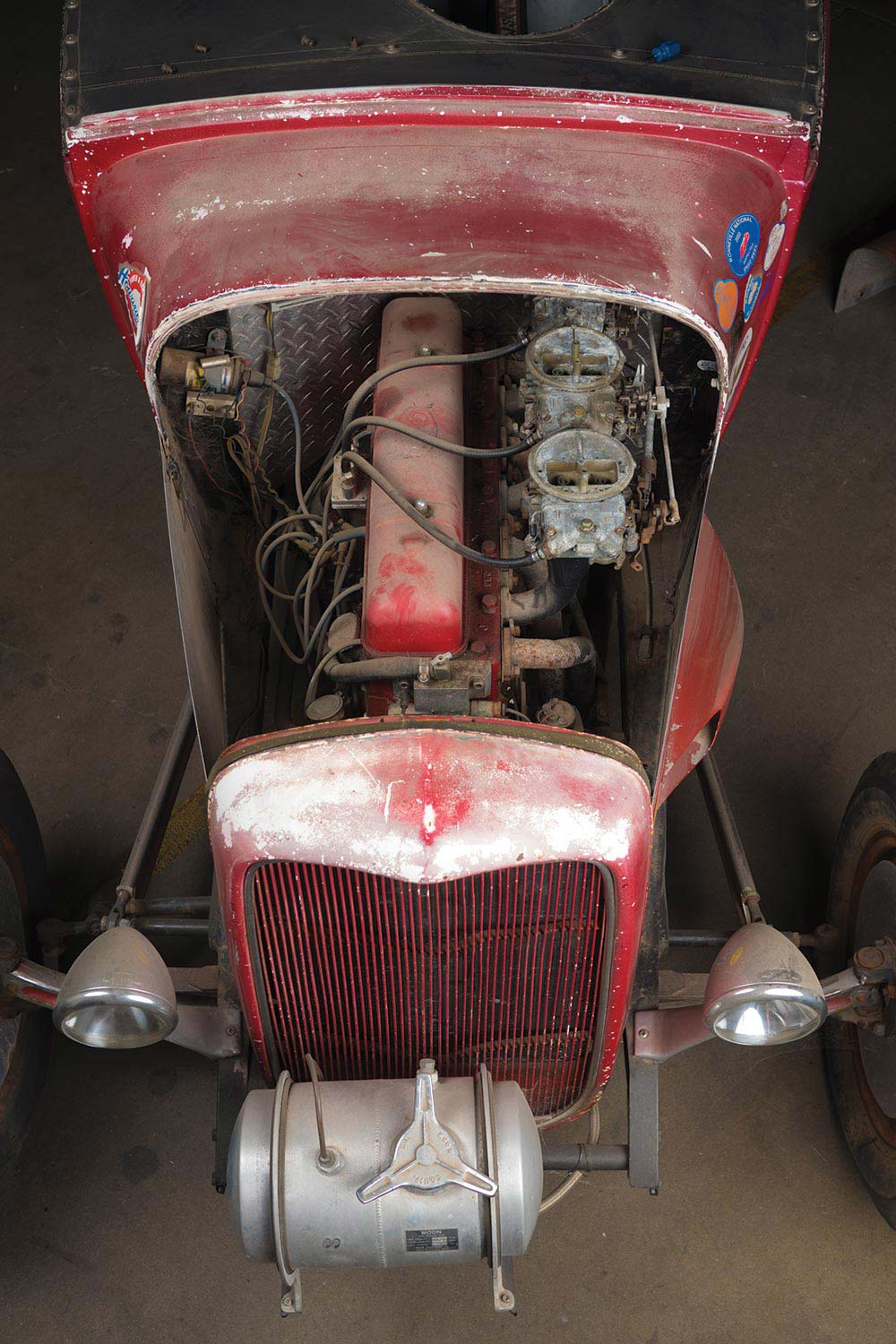 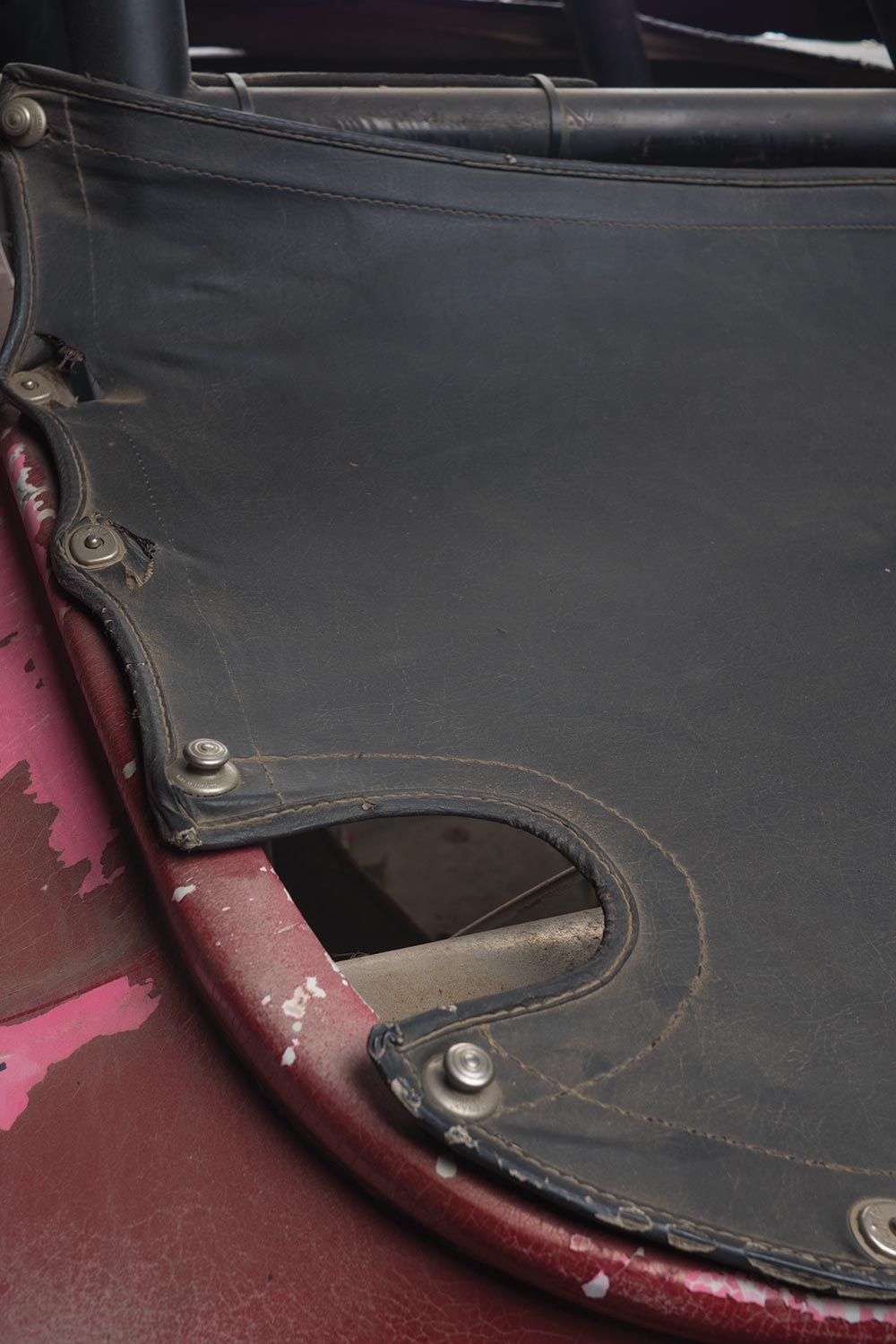 Modifications throughout the years included updating the roll cage and changing out cylinder heads.

Zeke caught “Salt Fever” in the mid-’70s when a friend let him drive a small-blockpowered roadster. After hitting 149-mph, Zeke was hooked and vowed to return with his own car. Previously the governing bodies had seen an opportunity to bring more competitors to the start line by creating a new class for older engine designs. Zeke seized this opportunity by retuning to the salt with his street-driven ’38 Chevy sedan converted to race car duty and managed to set a couple of records. Armed with knowledge gained setting the XXO/Sedan class records and hungry for more, Zeke started looking for a car to compete in the Roadster body class (Bonneville classes are divided by engine type/displacement and body style).

The roadster Zeke found had started life as a magazine project feature. Frank Oddo, a long-time automotive journalist and hot rodder, built the #29 roadster in the mid-’70s while documenting the build for series of articles in Street Rodder magazine. Once completed, Frank took it to Bonneville and went faster than 180 mph with a blown small-block Chevy V-8, from the legendary Bonneville figure Bruce Geisler, under the hood. The project and story complete, the car was sold to Lloyd Arnold, who replaced the  potent small-block with a four-cylinder Pinto engine. Lloyd campaigned the car off and on until selling it to Zeke in 1983.

FEWER LOOKED BACK IN TIMETO NEARLY FORGOTTEN ENGINE DESIGNS. WHEN ZEKE ACQUIRED THE BONNEVILLE VETERAN ROADSTER HE BECAME ONE OF THOSE FEW. 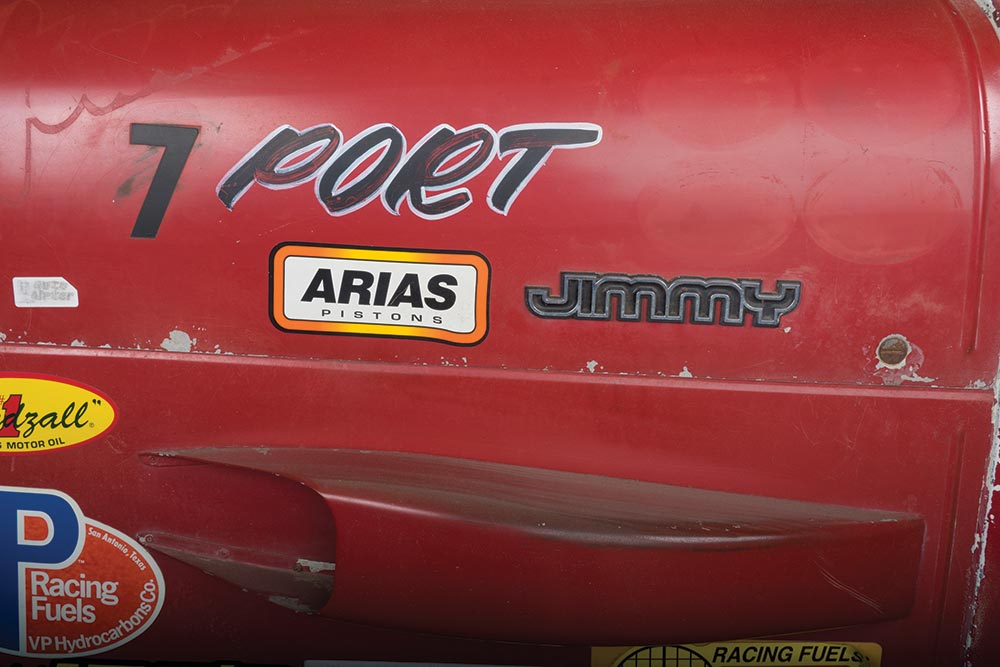 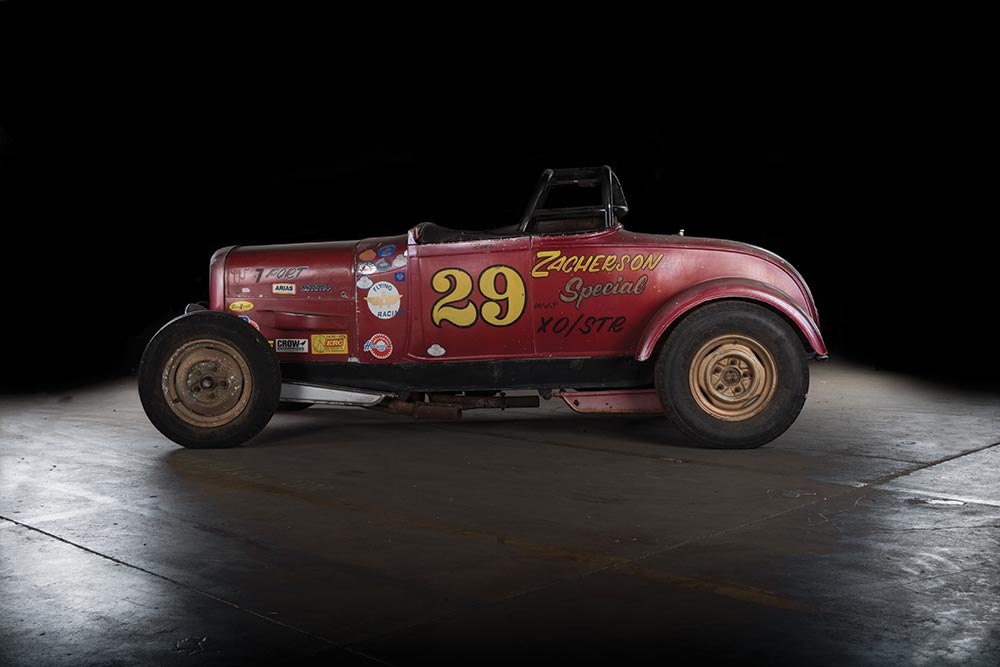 The Bonneville rule book mandates a fire extinguisher system and a working horn. 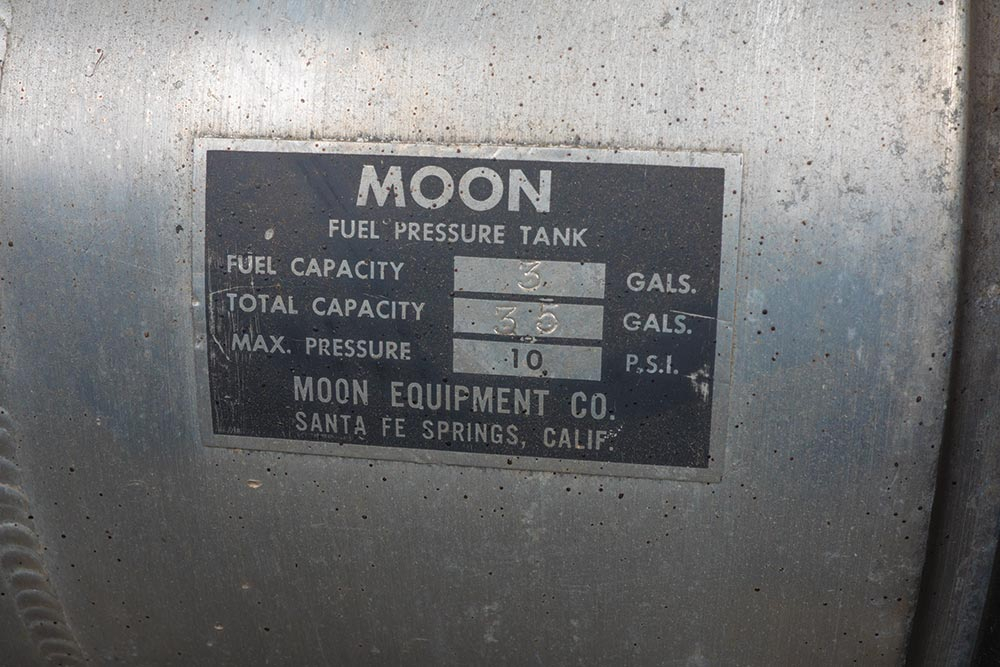 Zeke set about tearing the car down to the bare frame and replacing the four-cylinder plant with a GMC 302-ci inline six-cylinder engine acquired from Clifford Performance, a leading supplier of inline six-cylinder performance parts. The 302-ci GMC truck engine, originally fitted to 2.5-ton military trucks affectionately known as Deuceand- a-Halfs, had proven a potent hot rod engine in the early-’50s, powering the first car to break 150 mph on the drag strip and setting many land speed records. In stock trim, the engine was good for about 150 hp with solid low-end torque. This rivaled the newly introduced Ford Y-block V-8 and Chevy small-block V-8, although the inline six-cylinders were soon eclipsed once hot rodders realized the potential horsepower lurking in the V-8 motors. While the truck engines were praised for their sturdy blocks and nearly indestructible nature, they belonged to a family of engines that had its roots in the ’20s and carried with them a power-robbing head port design.

The venerable truck engine sported “siamesed” exhaust and intake ports in the head. Cylinders 2  and 3 and cylinders 4 and 5 shared a single exhaust port, while cylinders 1 and 6 enjoyed their own. The picture on the intake side was even worse where only three ports were shared between each pair of adjacent cylinders. Compounding this further, the stock intake manifold design favors the middle intake port, delivering less fuel and air to the front and rear cylinders.

ONCE COMPLETED, FRANK TOOK IT TO BONNEVILLE AND WENT FASTER THAN 180 MPH WITH A BLOWN SMALL-BLOCK CHEVY V8, FROM THE LEGENDARY BONNEVILLE FIGURE, BRUCE GEISLER, UNDER THE HOOD. 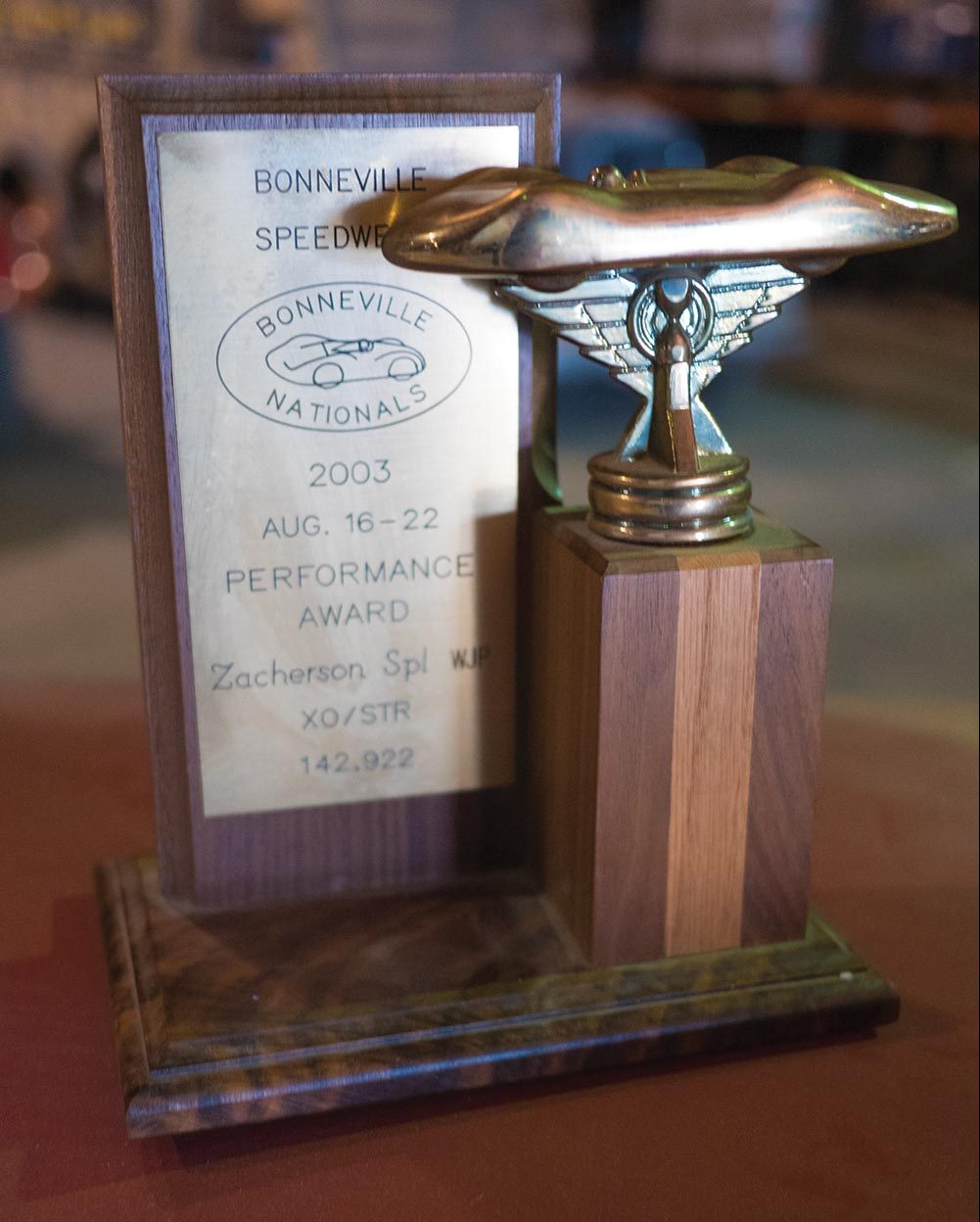 Zeke and the roadster accumulated numerous trophies and records throughout the decades.

Wayne Horning, a mechanical engineer at Lockheed Aircraft, recognized these shortcomings in the late- ’30s and drew up plans for a better-breathing head. While World War II put a hold on his plan to hot rod the Chevy sixcylinder, soon afterwards he produced heads that did away with the antiquated port design.

Other manufacturers took up the cause of the inline engine, notably Howard Johansen of drag and land speed racing fame. He produced cross-flow heads with 12 ports, one port for each intake and exhaust valve, that boasted 1 hp per cubic inch of displacement in street trim.

Zeke collected a couple of Howard 12-port heads throughout the years and chose to run them on his 302 GMC motor. He fitted the engine with a Howard 380 cam and 14:1 compression pistons to match. Then he fabricated his own intake and backed up the revived mill with a 1955 Chevy three-speed transmission and Ford 9-inch rearend with .325 gears. He then updated the roll cage to meet new regulations from the SCTA (Southern California Timing Association, one of the governing bodies of land speed racing) and removed nearly 1,100 pounds of lead that had been bolted to the frame in an effort to gain rear wheel traction. The fiberglass body had been stretched 11% in the hood but retained an original grille shell per SCTA rules.

THE VENERABLE TRUCK ENGINE SPORTED “SIAMESED” EXHAUST AND INTAKE PORTS IN THE HEAD. 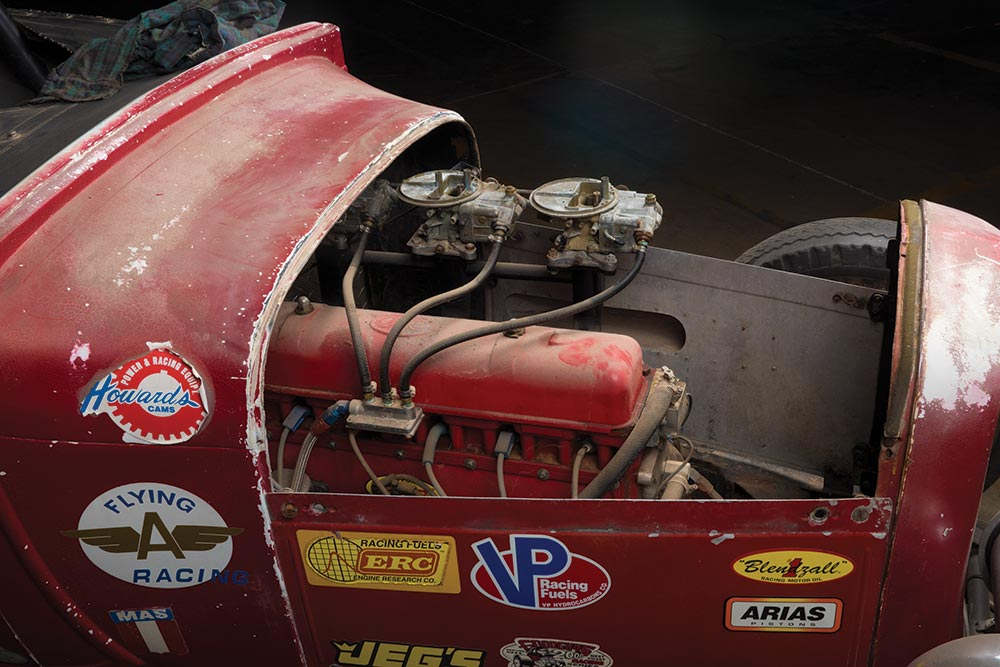 Inspection stickers are a badge of honor for a Bonneville car, while faded graphics proclaim the car number, owner and class. In this configuration, he went to Bonneville and quickly set records. Another rule change split the use of specialty and stock heads into separate classes, and Zeke set records in both in the same day by changing heads. Zeke took the  roadster to run at El Mirage dry lake bed in Southern California and set a record using a stock head on the GMC 6, but the governing body at the race would not certify it since he was not a member of one of the clubs that run the event.

The #29 Zacherson Special even made a couple of appearances on the drag strip. Zeke and the car became a fixture at Bonneville throughout the years, setting records from the mid-’70s until the late-’90s. Pictures of the car have graced four calendars and even the pages of an ’80s issue of Penthouse magazine.

The retro craze that Zeke helped usher in took a firm grasp of the minds of Bonneville racers. Interest in the roots of land speed racing and hot rodding is stronger now than ever before. Flathead V-8, vintage inline four- and six-cylinderpowered cars now attract more attention than their modern counterparts in the Bonneville staging lanes.

Eventually both Zeke and the roadster started to grow long in the tooth. What once was a vanguard of a retro movement on the salt became just another old race car, so Zeke hung up his helmet. When Joe Fazio, owner of SoCal Speed Shop Sacramento, heard that the #29 Zeke Zacherson Special was available for sale he jumped in to preserve this piece of land speed racing history. It now resides in Joe’s collection waiting for its next chance to bring the roots of hot rodding to yet another venue.

THE RETRO CRAZE THAT ZEKE HELPED USHER INTOOK A FIRM GRASP OF THE MINDS OF BONNEVILLE RACERS. INTEREST IN THE ROOTS OF LAND SPEED RACING and hot rodding is stronger NOW than ever before. 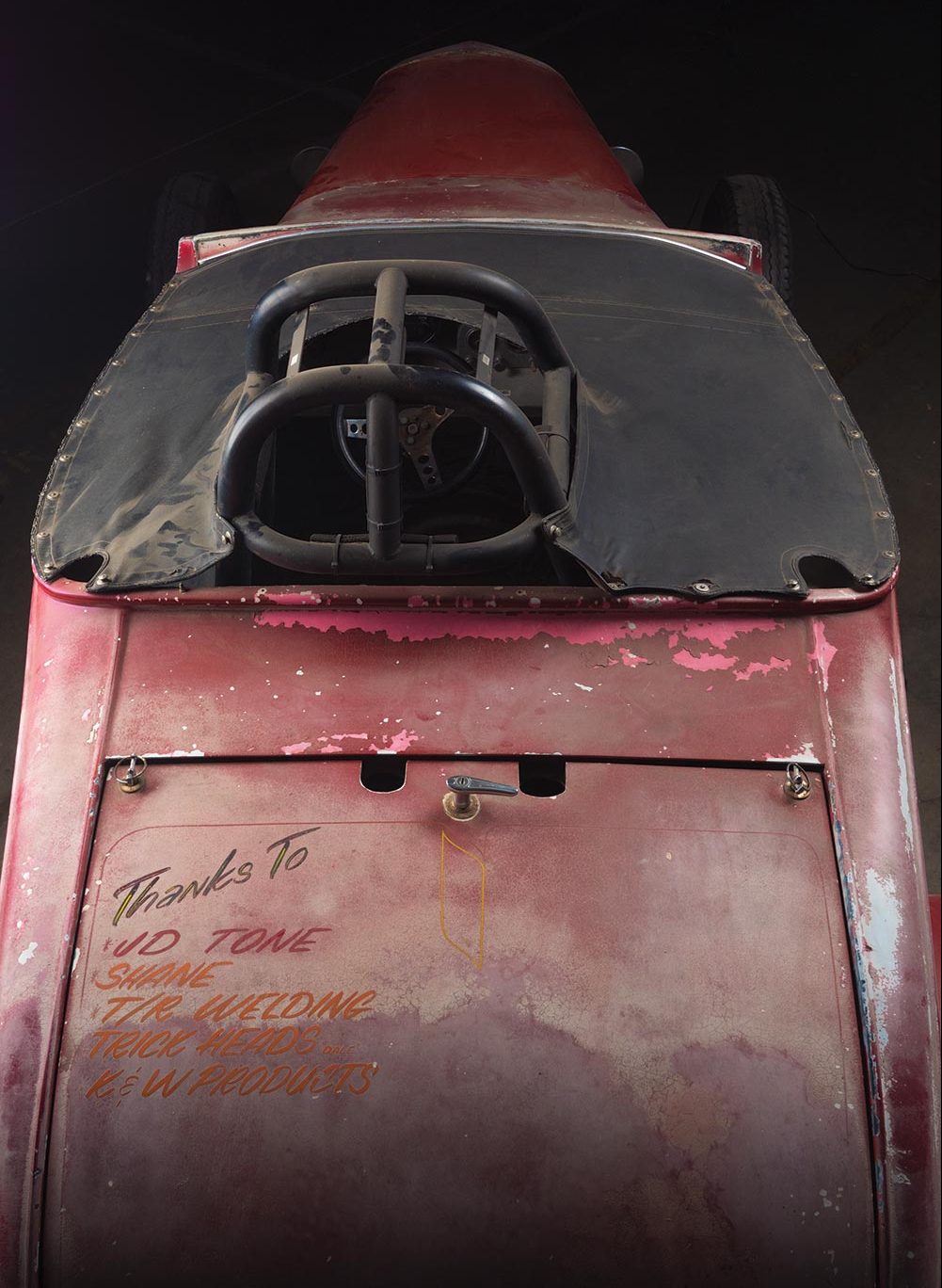 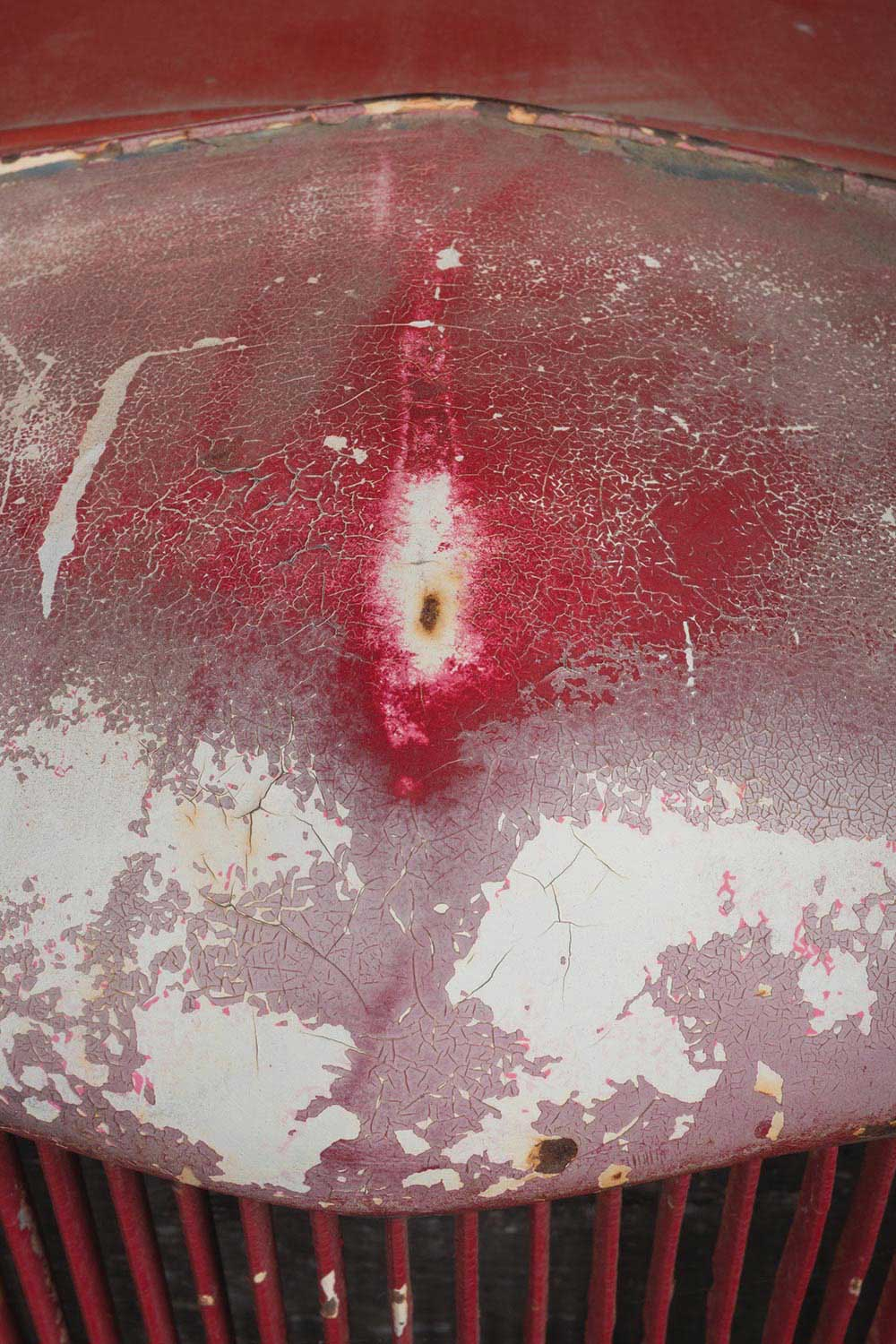 Years of storage and time on the salt show in the accumulated patina.