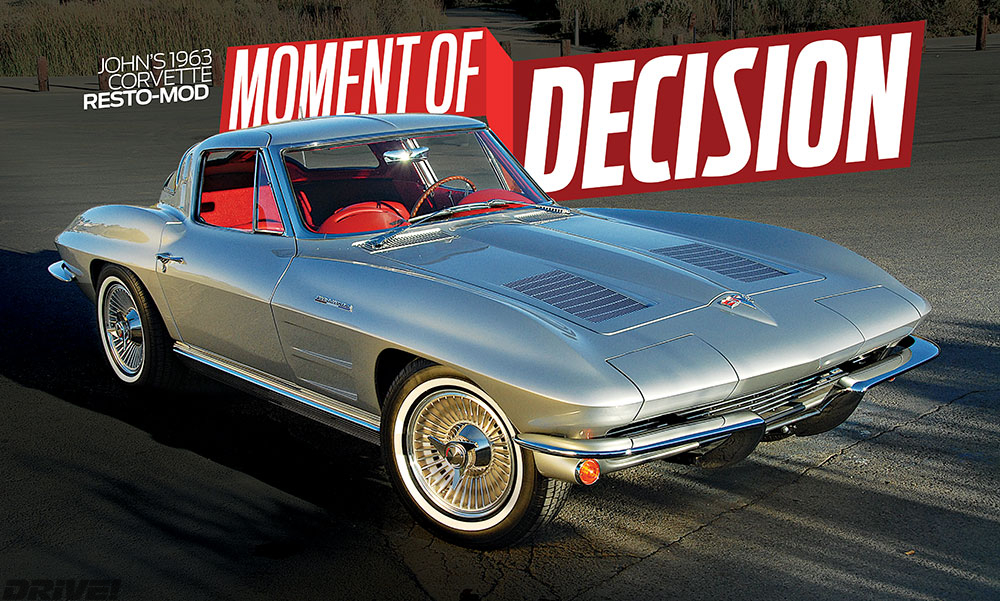 CHOOSING WHETHER TO RESTORE OR RESTO-MOD AN OLDER CORVETTE ISN’T ALWAYS EASY. WHILE WRESTLING WITH THE MERITS OF BRINGING BACK AN ORIGINAL VERSUS TAMPERING WITH A CLASSIC, THE FINAL DECISION MIGHT DEPEND ON SEVERAL FACTORS. OFTEN IT’S DICTATED BY THE CONDITION AND HISTORY OF THE VEHICLE. AFTER CONSIDERING HIS OPTIONS ON A DILAPIDATED ’63 SPLIT WINDOW, JOHN DANIELS’ DIRECTION WAS FAIRLY OBVIOUS. THROUGH HIS FRIEND JOHN VESTRI OF VESTRI’S VETTES, A FIRM SPECIALIZING IN RESURRECTING NON-ORIGINAL DONOR CORVETTES, HE’D FOUND A SUITABLE PROJECT CAR IN ARIZONA THAT HAD A GOOD BODY AND INTERIOR. BUT, THE ORIGINAL RUNNING GEAR WAS GONE, AND A NEWER CHEVY 350 CRATE ENGINE WAS IN THE ENGINE BAY.

LACKING ANY NUMBERS-MATCHING PARTS, OR ANY SIGNIFICANT PROVENANCE, DOING A RESTO-MOD ON THIS BELEAGUERED CORVETTE WAS BASICALLY A GIVEN. 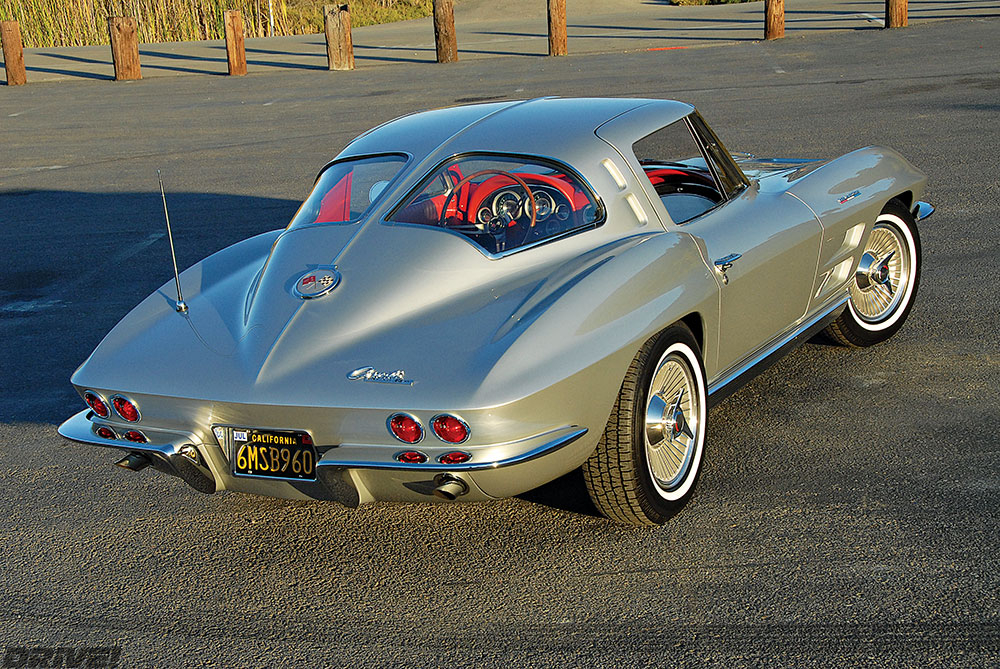 Body: Smoothing the body of an early Corvette often requires taking it down to bare fiberglass, so Daniels’ split window was stripped clean by Media Resurfacing. After thorough prep work, Alex at Pro Design sprayed the Corvette with a custom mix of PPG silver for a spectacular sheen.

Since Vestri had a backlog of work, he introduced Daniels to Mike Filion of Pro Design Hot Rods in Santa Ana, California, who would eventually demonstrate emphatically how to transform a tired collectible into a contemporary classic. The frame-off project began with gusseting and reinforcing the frame and motor mounts to withstand far more power than ever conceived for the original, to wit, a 510 hp ’09 LS7 and 4L65 automatic with a Lokar shifter.

While the rearend is stock, both ends of the chassis were enhanced with control arms and monosprings from Vette Brakes & Products, plus Bilstein gas shocks at all four corners. Corvette America supplied a sport-ratio power-steering system linked to a Flaming River column.

While all of those upgrades were in the works, the body went to Media Resurfacing for stripping to get rid of the original’s notorious orange-peel paint finish. The door gaps were also evened out to an exacting 3/16 inch, a level of precision rarely seen on early Corvettes.

While the silver paint looks similar to the hue from the factory in the early ’60s, it’s actually a custom PPG mix expertly applied by Alex at Pro Design. Steve Vandemon gave the coil covers a custom airbrush graphic, as well.

Pro Design installed a number of trick treatments to give this split window the latest and greatest in automotive technology. When all was said and done, Daniels had the Corvette he first lusted after as a teenager, and then some. 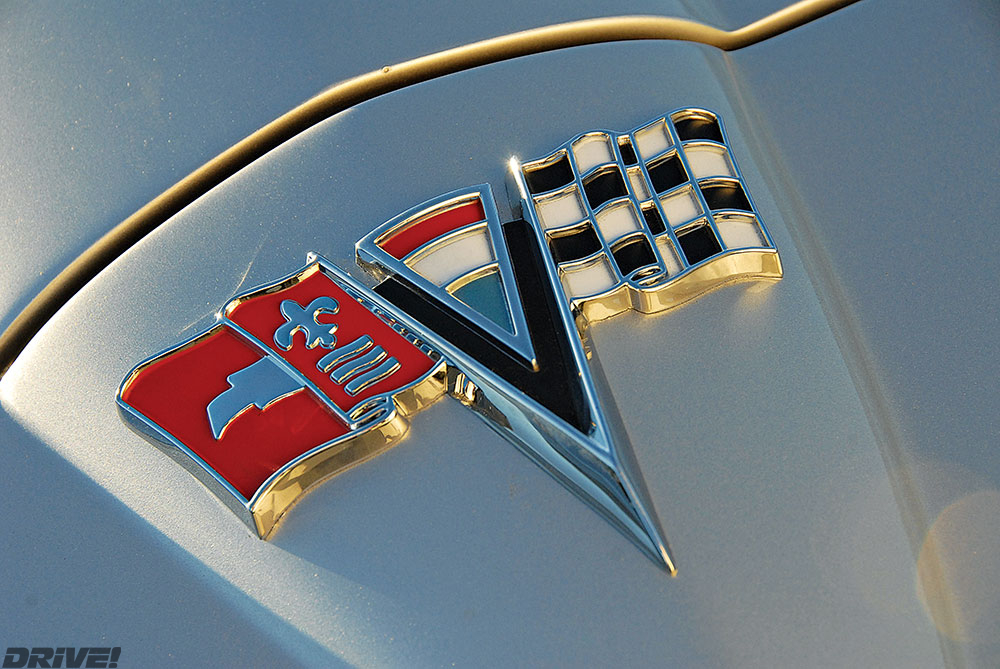 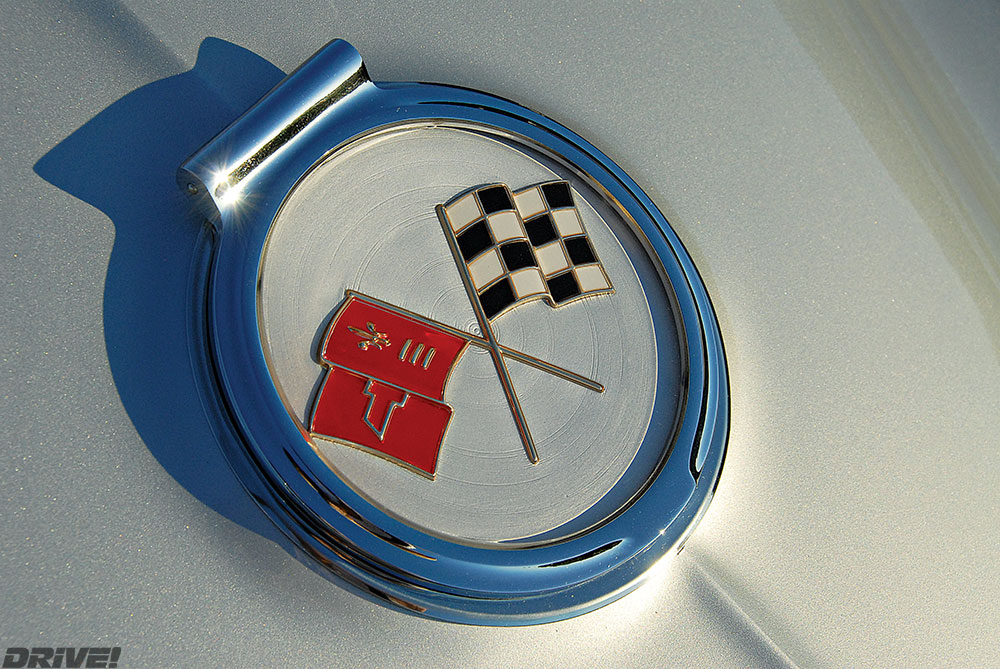 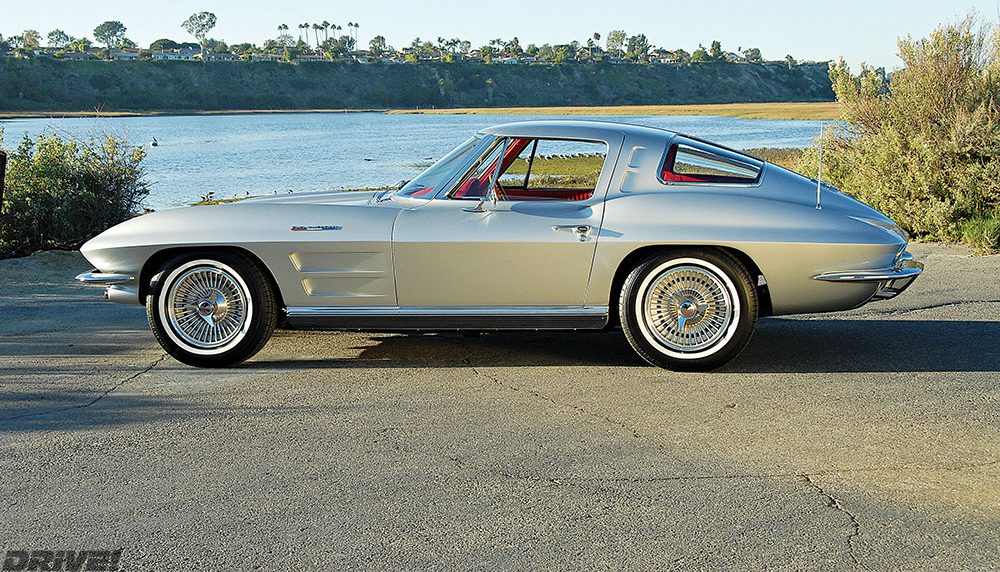 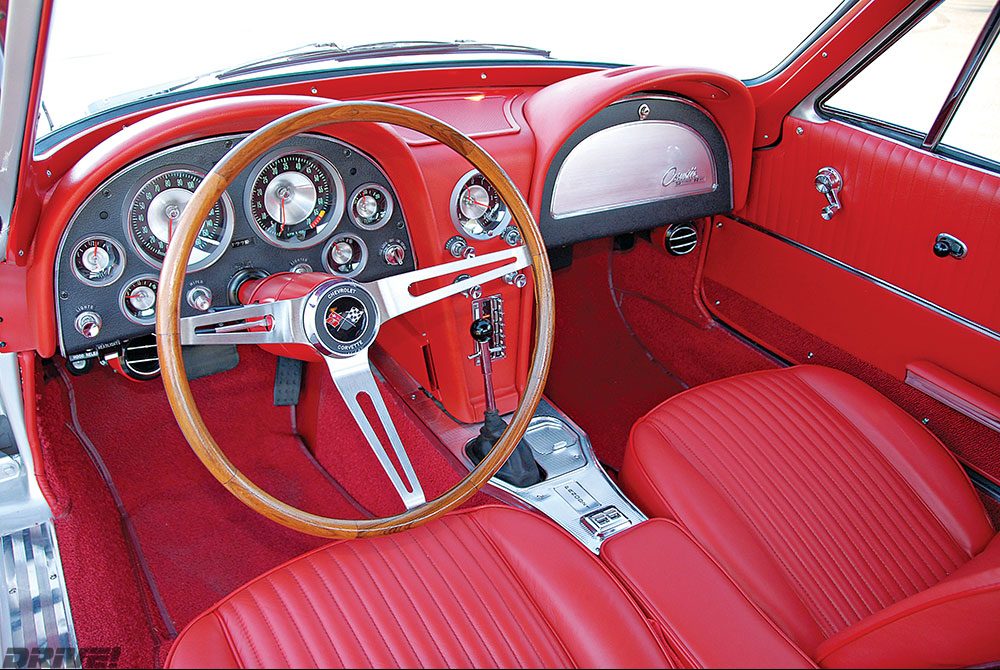 REASON FOR BUILDING THIS PARTICULAR CAR: TO FULFILL A LIFELONG DESIRE FOR A ’63 SPLIT-WINDOW COUPE, BUT WITH MODERN MECHANICALS. 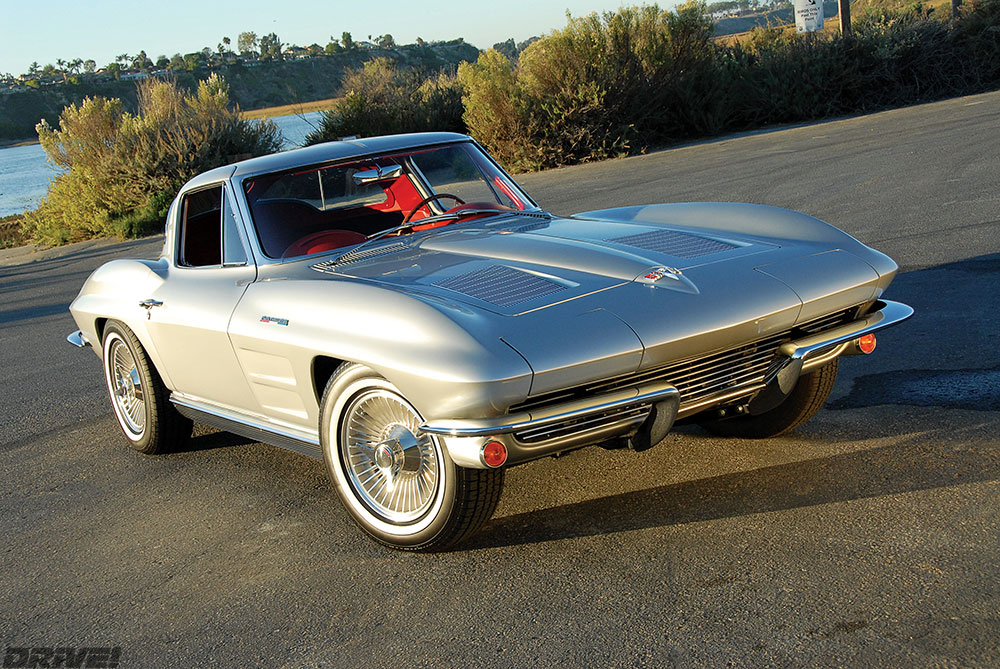 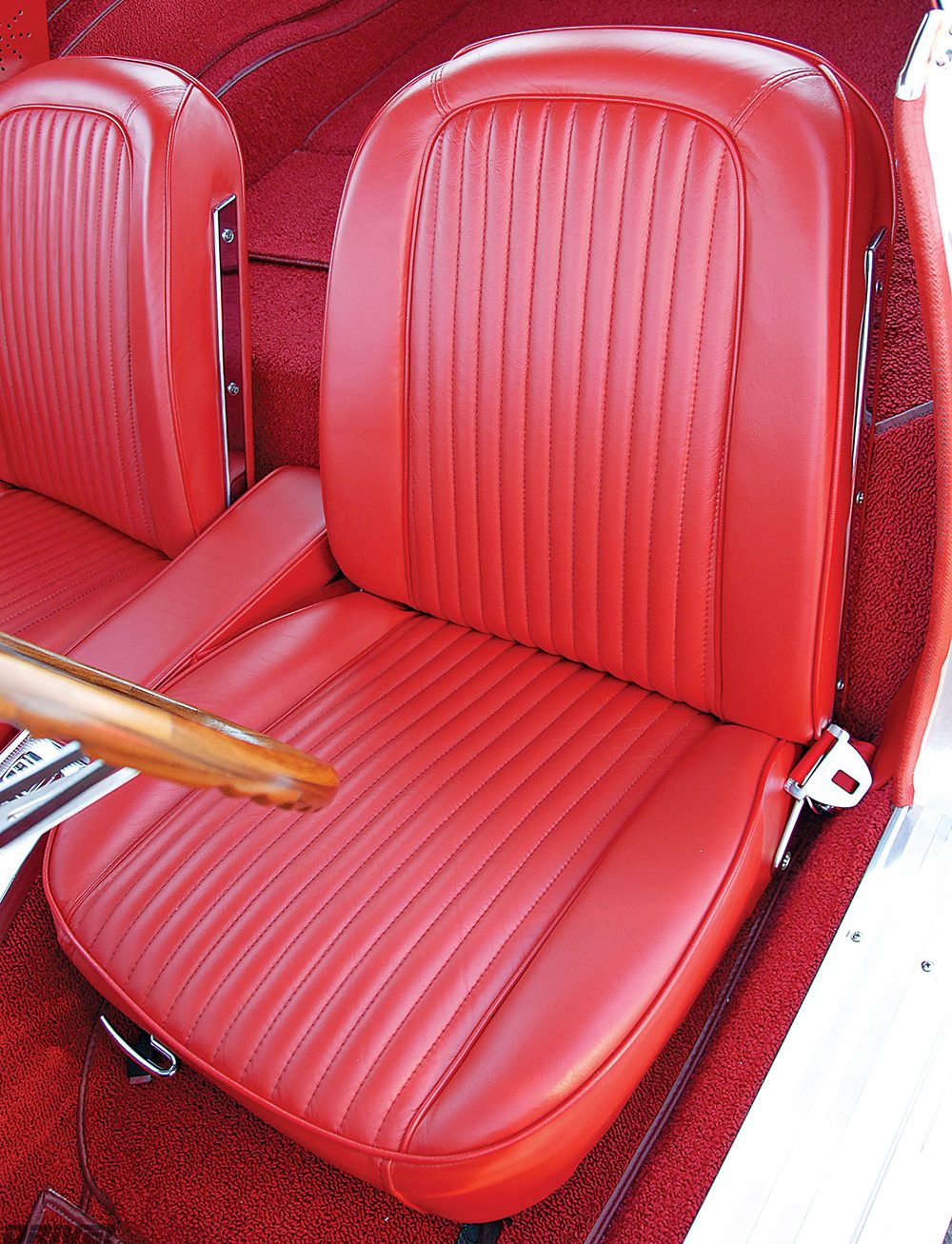 IN MY OPINION, THE ’63 COUPE IS THE MOST BEAUTIFUL ’VETTE EVER BUILT. MY GOAL WAS TO CREATE A SPLIT WINDOW THAT IS VISUALLY INDISTINGUISHABLE FROM AN ORIGINAL ’63. MY COLOR CHOICE WAS A BRIGHT [SEBRING] SILVER WITH A RED INTERIOR, IDENTICAL TO THE ONE THAT HOOKED ME AT AGE 17. EXCEPT FOR SLIGHTLY BEEFIER RADIAL TIRES AND LARGER EXHAUST TIPS, NO ONE CAN TELL WHAT THIS CAR IS UNTIL THE HOOD GOES UP!” 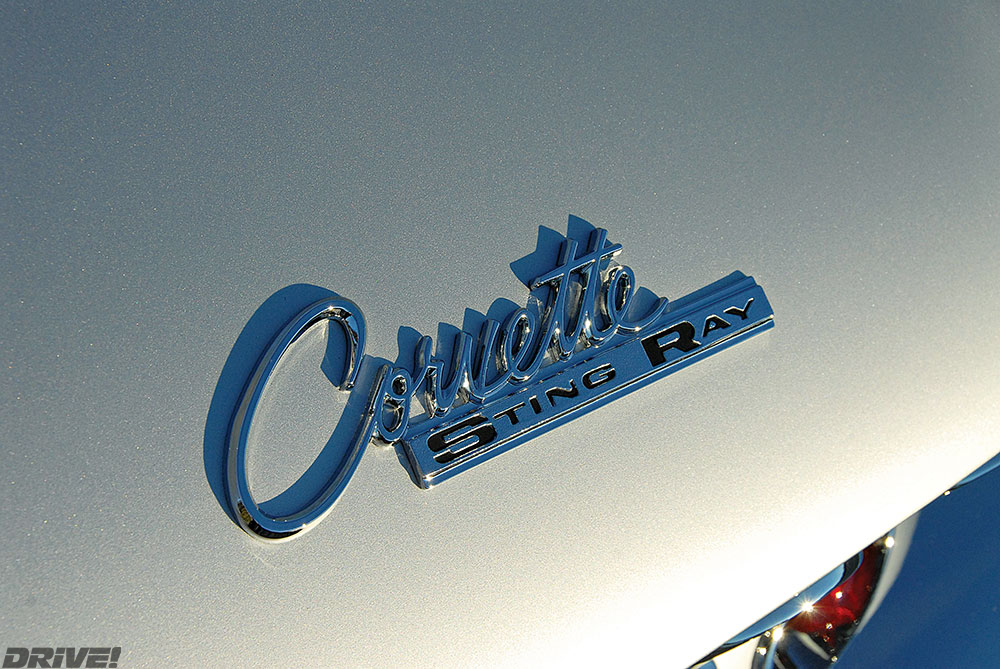 Engine: Fitting a modern LS7 into a ’63 Corvette frame entailed a few modifications, such as a custom oil pan by Street and Performance, a Peterson oil sump, Sanderson headers and a custom 2/5-inch exhaust from Mesa Muffler. Steve Vandemon expertly airbrushed the ignition coil covers.