Look under the hood of any vehicle built after 1990 and you’ll notice one thing in common: They all have an intake system that pulls air from a fender well or from the front of the core support, supplying the engine with fresh, cool air for maximum power and efficiency. Why? Because cool air is denser than warm air, which means there is more oxygen packed into every square inch. The higher the oxygen content, the more powerful and efficient your engine will be with every stroke of a piston. Cooler intake air becomes a denser charge, which equals more tire-churning power. 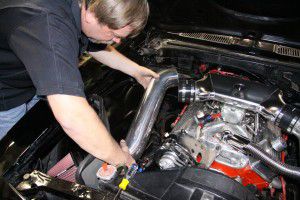 Most classic street machine owners rarely give a second thought to slapping a 14-inch round open air cleaner on top of their carburetor and calling it a day. The problem? Between your oversize radiator, headers and all those hoses, the air temperature under the hood of your muscle car can spike as high as 220 F on a hot summer day! The team at Spectre Performance in Ontario, California, decided cold air intakes shouldn’t be relegated strictly to the late-model crowd, so they designed a series of intake systems for classic Chevy muscle cars.

The principal is simple: Pull cool air from outside the engine compartment and feed it directly into the engine in the smoothest way possible. Spectre offers a variety of intake systems for Camaro, Chevelle, El Camino, Impala, Nova and more. The RacePak system looks like it was lifted off a ‘64 Ford Thunderbolt race car: a round filter in a big spun aluminum can with two intake tubes running to the front of the engine compartment. The PowerPak and TrackPak systems use a hat on top of the carburetor that pulls air either from the fenders or from the corners of the engine compartment that have been isolated from the heat with laser-cut heat shields. All three systems are easy to bolt in with hand tools. The systems make impressive power gains, as they can drop inlet air temperature by as much as 100 F on a hot summer day. The more powerful your engine (and therefore the more air it requires, since engines are basically big air pumps) the more it is affected by inlet air temperature. Here are some examples.

Ever wonder why your car feels so much faster on cold winter mornings than on hot summer afternoons? The more power you make the more your engine is affected by the density (temperature) of the air. Cooler, denser air means more oxygen is packed into the combustion chamber on every compression stroke of the piston. The more powerful the engine, the greater the improvement in power. A 500-hp engine can see a 100-hp gain from a 110 F inlet air temp drop. But even a modest 30 F inlet air temp drop picks up 24 hp and 25 lb-ft of torque!

We followed along as Spectre installed an intake on an early Camaro powered by a standard small-block Chevy. The entire process took less than an hour, and we were on the road and making more power. Every Spectre ProFab intake uses a high-flow, reuseable hpR air filter element that is backed by an unlimited lifetime warranty fed by mandrel-bent aluminum intake tubes, and includes all necessary brackets, adapters and hardware. The kit includes everything necessary for installation, including dual hpR filters, polished mandrel-bent intake tubes, a polished plenum, heat shields and all necessary hardware. The Spectre ProFab PowerPak uses laser-cut heat shields to isolate the high-flow hpR filters from under-hood engine heat. The model in this picture has a polished cast plenum, but a fabricated sheet metal plenum is also available. Our test subject is a standard 350-powered Camaro with all the standard speed parts, including headers and an aftermarket intake manifold. Since heat rises, the hot air coming off the headers is pulled directly into the carburetor. 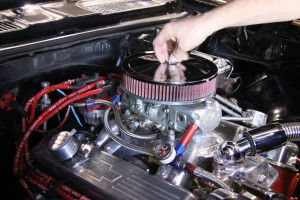 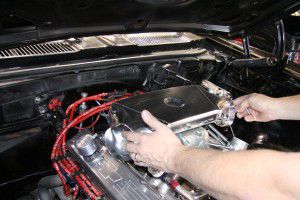 Next, test-fit the Spectre plenum on the carburetor. You will likely have to shorten the stud since the dual-snorkel intake is much lower profile than a standard air cleaner. 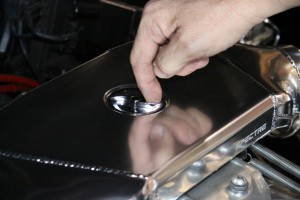 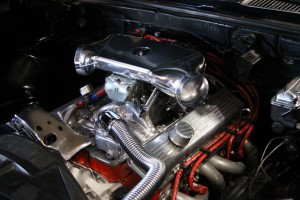 With the plenum secured to the carburetor, it's time to add the heat shields and the intake tubes. First, remove the factory fender braces with a box wrench. The filters and heat shields will tuck into the corners of the engine compartment beneath these braces. 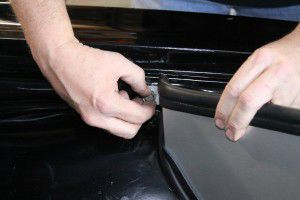 Next, drop the laser-cut aluminum heat shield into place and use the included bolts to fasten it to the fender. They are pre-bent to fit precisely into the corner and come with rubber seals to keep as much unwanted heat out as possible. 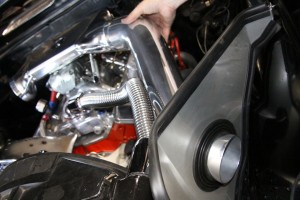 Here you can clearly see how the heat shield works. Once it is bolted in securely, feed the filter side of the mandrel-bent intake tube through the grommet in the center of the shield. Push the sleeve up onto the end of the plenum. Tighten up the hose clamps evenly and firmly, but don't make them too tight. Finally, push the Spectre hpR filter onto the end of the tube and secure the hose clamp. 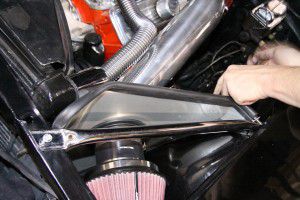 Bolt the fender brace back in place and the driver side is complete. The passenger side installation process is the same. Bolt in the heat shield, then install the intake tube and top it with the hpR filter. On this particular car, the customer relocated his battery to the trunk so we had room for a dual-snorkel intake. If the battery were still in the stock location, we could have used a Sidewinder intake, which only has one tube. The passenger side fender brace is the final touch. Spectre's PowerPak not only improves power and engine efficiency, it looks pretty cool, too. Cold air enters the air boxes from the open fender wells. 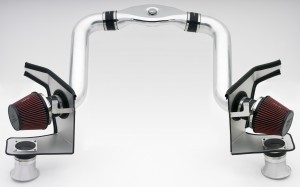 This is another variant of the PowerPak for the Gen 2 Camaro, complete with optional intake ducts that feed air from the inboard turn signal lights. 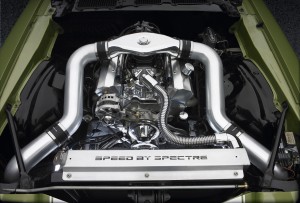 The Spectre ProFab TrackPak uses the same plenum, but the conical hpR filters are actually hidden inside the tubes for a cleaner look. Unlike the previously mentioned intakes, the Spectre RacePak houses a traditional 14-inch round hpR filter in a spun aluminum intake housing for maximum airflow.