FROM THE SHADOW OF GREATNESS 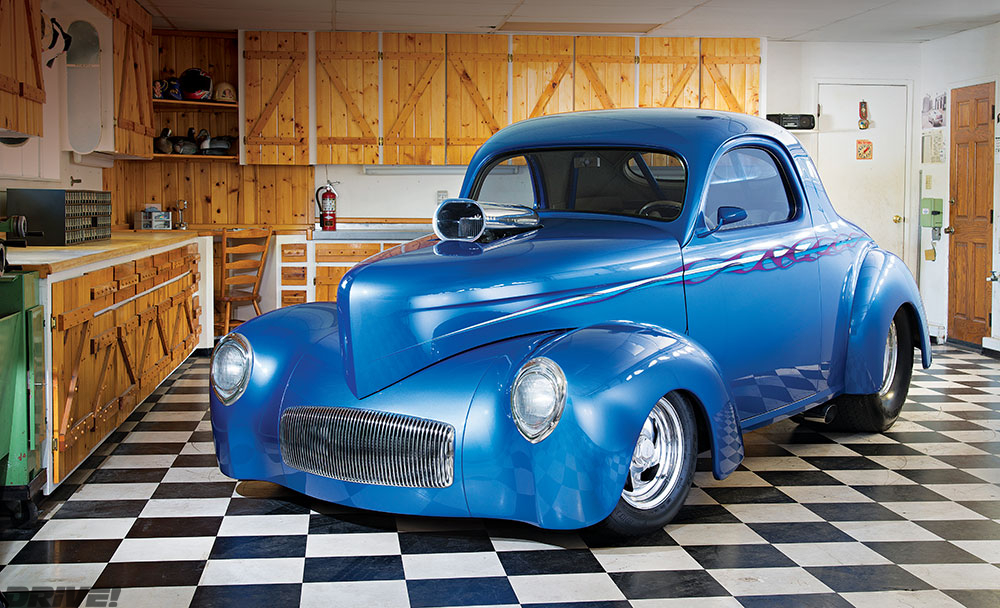 A Wolf In Street Clothing

As any true American performance car enthusiast will readily attest to, there are particular makes and models that can raise the blood pressure. Some may get jacked up over a ’57 Nomad or ’32 Ford coupe. Others are grabbed by a trick T-bucket or a chopped Merc. Then there are muscle cars like a GTO, SS 454, Hemi ’Cuda or Boss 429 that make the mouth water. No matter what type of car lights your tires, there is one make and model that seems to transcend all boundaries and interests, the ’41 Willys coupe. 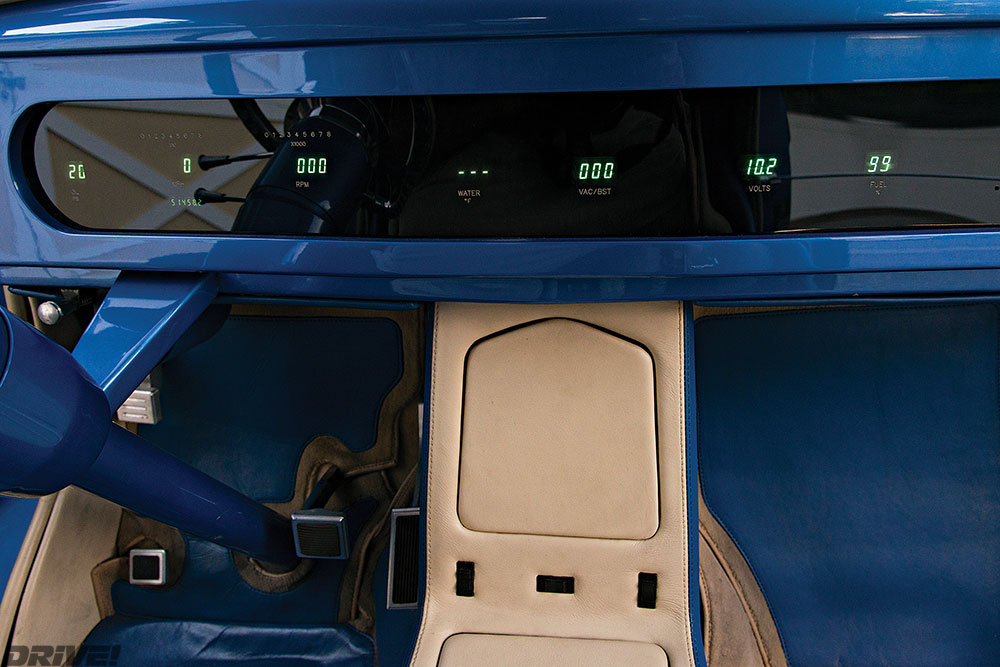 Dakota Digital instrumentation was crafted into a custom-made dash. The console features storage and fuse box compartments. Aluminum go, stop and dead pedals give the feet something to do.

The once lowly pre-war business coupe gained a faithful following during drag racing’s early gasser days. Led by altered cars like those of K.S. Pitman and Stone, Woods & Cook, the distinctive profile launched a million teenage dreams; add to this the fact that Revell made sure that every hobby and toy store in America was stocked 1:25- scale plastic model kits of the racing stars and it’s no surprise that altered cars captured the imagination of young people at the time.

FOR JOSHUA JORDAN, SEEING THIS WILLYS WAS LOVE AT FIRST SIGHT. THE FAMILY OWNS A STABLE OF OUTSTANDING RODS, CUSTOMS AND CLASSICS, BUT THIS MONSTER OF A STREET MACHINE HAS A DOMINANT AURA. 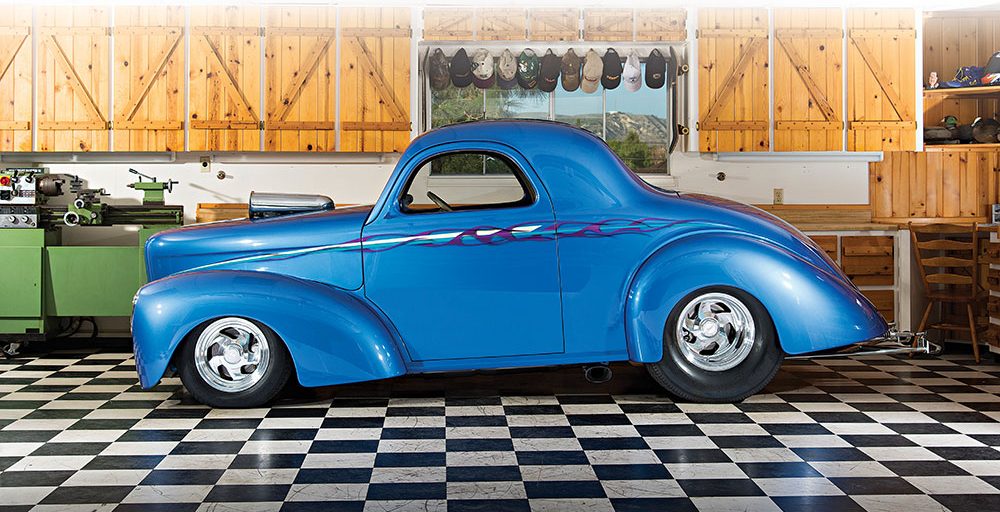 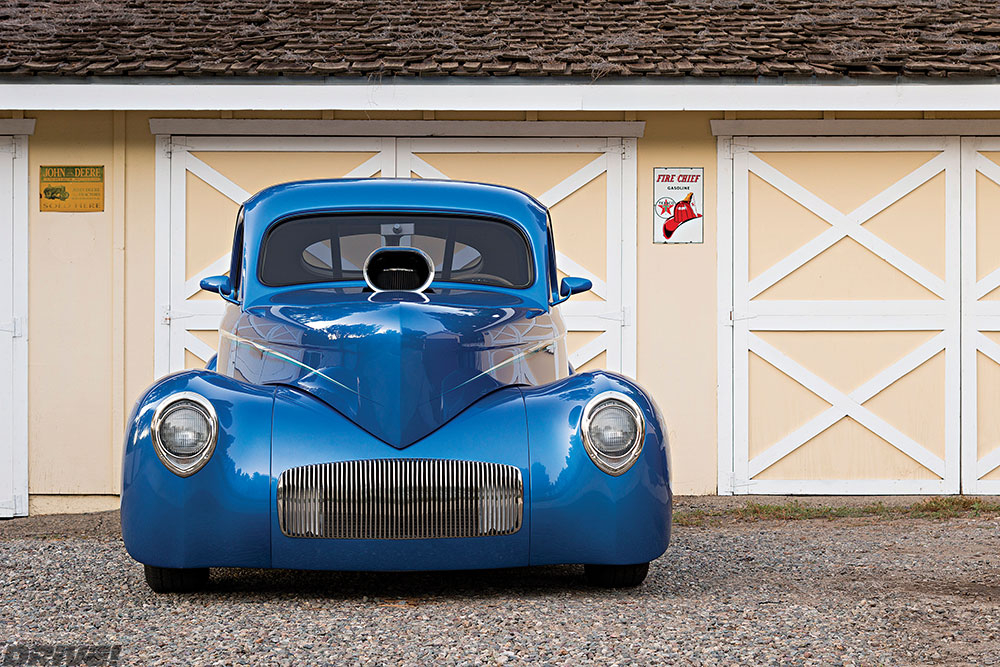 Making the transition from strip racer to street car was not as common as one might think. It was especially odd given the car’s enormous crowd popularity. It was that exact popularity, however, that kept the Willys coupe on the quarter-mile and off Main Street as there just weren’t enough body shells to go around; thus, the 1939-40 Ford Business Coupe became the more abundant hot rod foundation.

As the decades passed, and with the advent of the Funny Car, gassers fell out of favor. All of those Willys racers, once a highlight of the track, were passed along or shoved into shop corners, barns and backyards. Every now and then, one was dusted off and treated to a more practical engine and suspension combination in route to some street time.

When vintage drag racing started to catch fire, all of a sudden everyone was in search of the old Willys race cars. When Mike Cook restored the original SWC machine, the demand for these cars once again overwhelmed the availability. Then, some genius started popping out fiberglass body shells. The cause and street effect was not quite as dramatic as with reproduced T-buckets or Deuce roadsters, but it meant the Willys could find its place on the street scene. 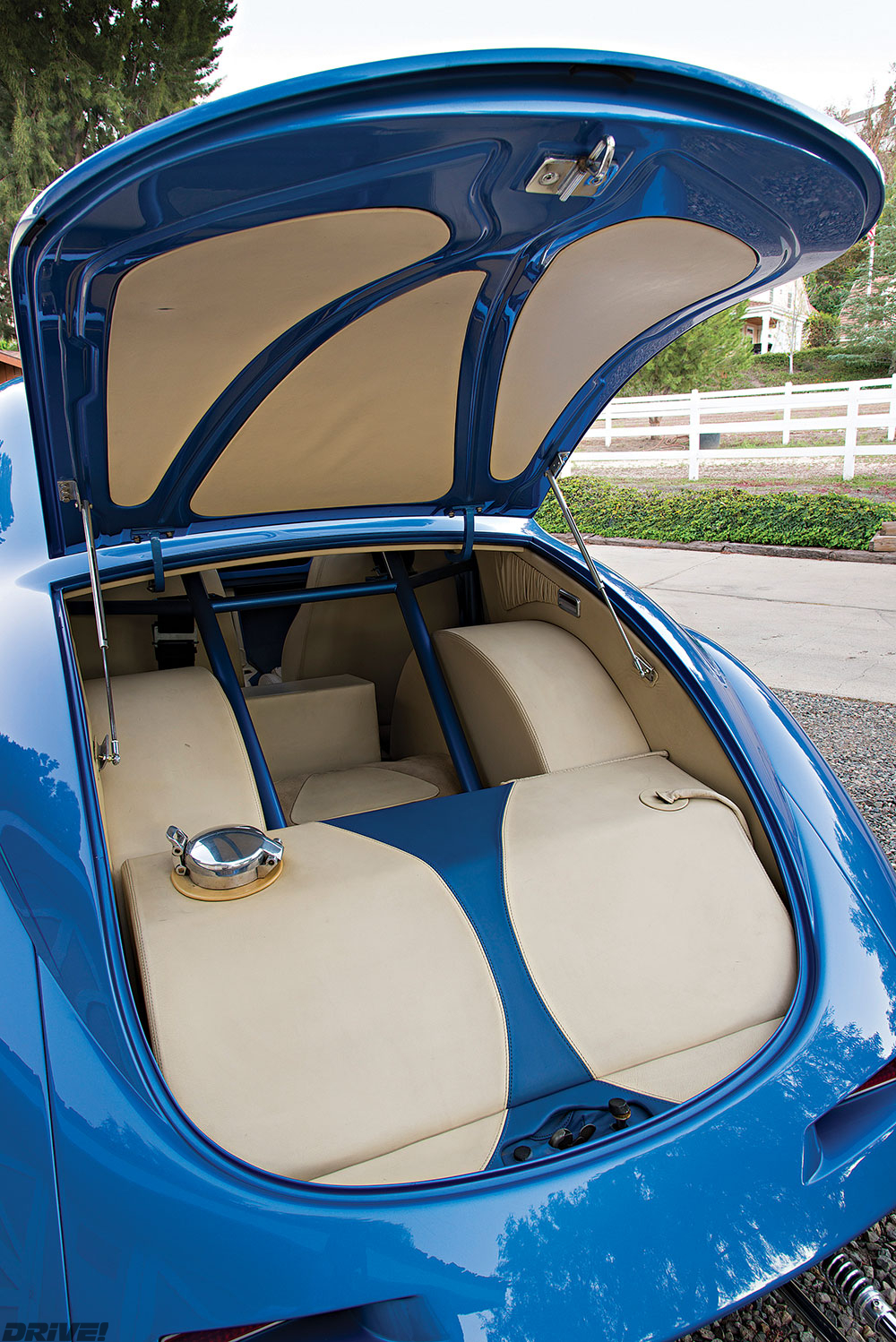 It’s rare that the gas and luggage areas get this level of attention. Under the rear lid is a pristine, well thought out and executed application of workmanship and materials.

Since the reproduction era began, there have been many very fine examples of the Willys street coupe. But perhaps none is more impressive and intimidating than that owned by the Jordan Family collection of Orange County, California. For Joshua Jordan, seeing this Willys was love at first sight. The family owns a stable of outstanding rods, customs and classics, but this monster of a street machine has a dominant aura. And why wouldn’t it? This is a killer build through and through.

WHEN VINTAGE DRAG RACING STARTED TO CATCH FIRE, ALL OF A SUDDEN EVERYONE WAS IN SEARCH OF THE OLD WILLYS RACE CARS.WHEN MIKE COOK RESTORED THE ORIGINALS WC MACHINE, THE DEMAND FOR THESE CARS ONCE AGAIN OVERWHELMED THE AVAILABILITY. 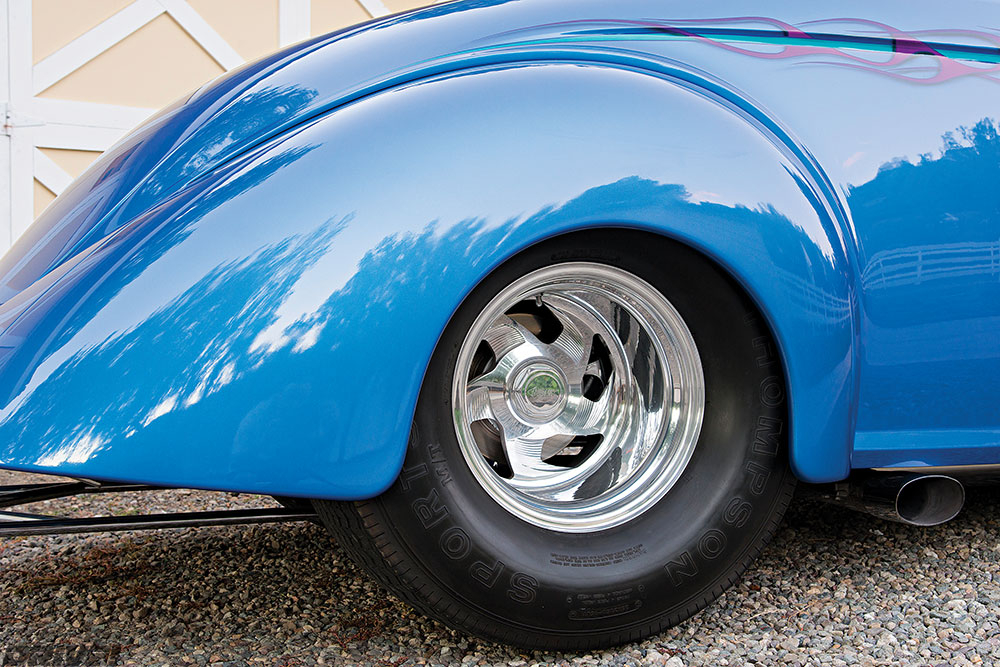 Behind the mammoth Mickey Thompson tires and Budnik wheels are 12- inch disc brakes attached to Strange axles in a narrowed Ford 9-inch rear.

The original construction took place more than a decade ago. Using an Antique & Collectible Autos high-quality shell, it was mated to a specially constructed tube frame chassis. A narrowed Ford 9-inch rearend was set up with parallel 4-link arms with coil-over shocks. Right from the get-go it was decided that this was going to be a beast worthy of its iconic status. The first order of business was to go big, as in big-block. Noted engine builder Wayne Halabura assembled a 454 Rat motor punched out to 513 ci. Next 9.5:1 TRW pistons were added to the solid steel crank. A B&M 420 Mega Blower was added with a pair of Edlebrock fourbarrel carbs. Everything was either plated or polished and all lines were braided steel with aircraft fittings. The goal was to exceed 1,000 hp. Actually dyno numbers confirmed the beast’s potential. 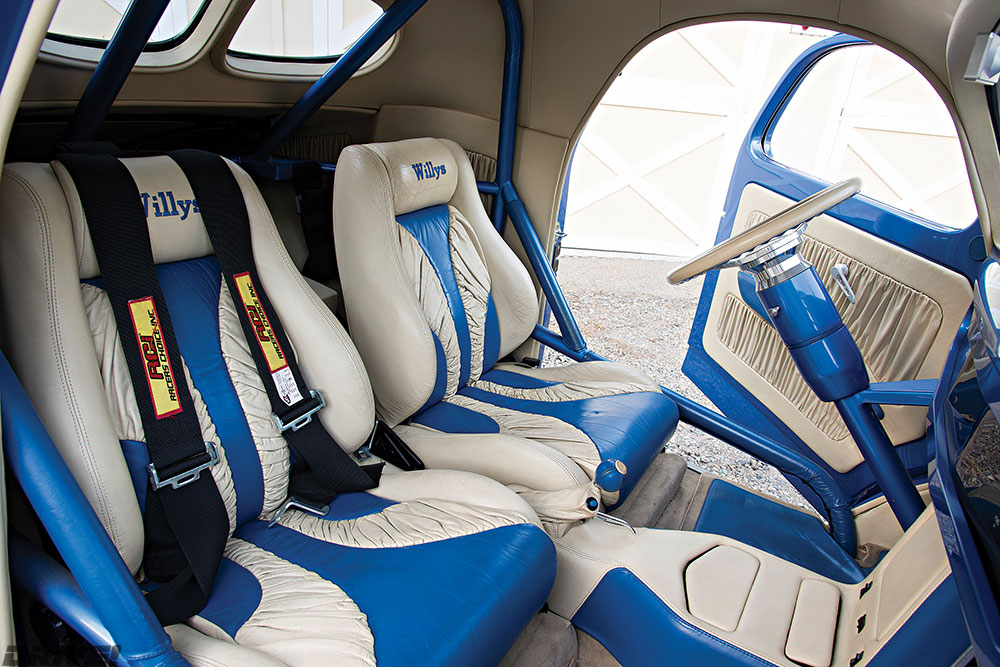 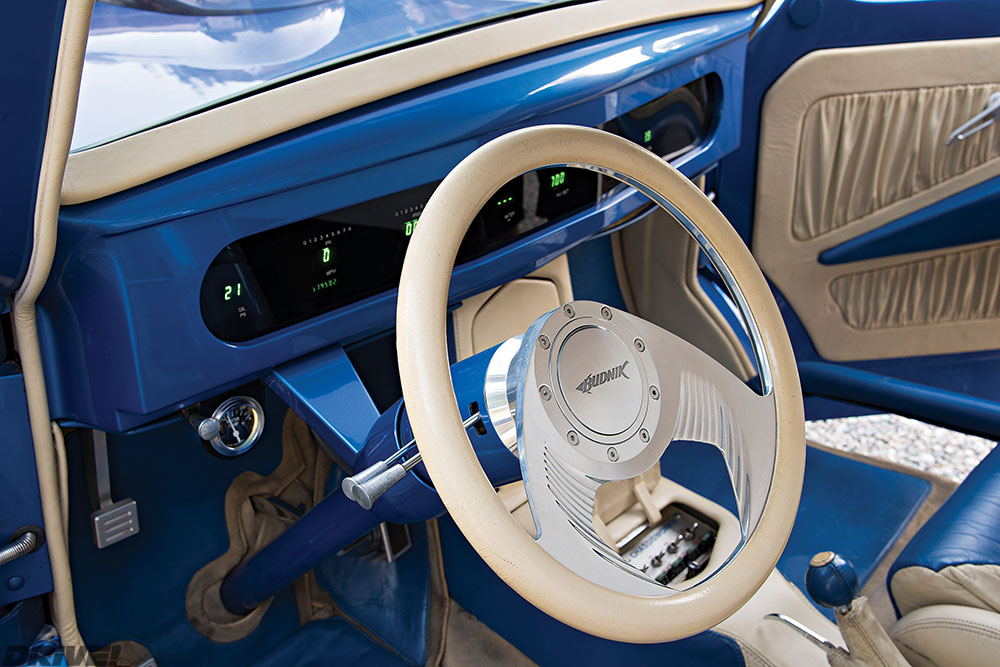 The cut of the Budnik billet aluminum steering wheel matches the road wheels. The wheel was covered in matching leather. Aluminum tilt and turn stems were added.

There was no intent to make the Willys cruise night friendly. The locker-style rear axles were mated to 4.10 gears. The performance-built GM Turbo 350 trans was also beefed up to handle the additional stress.

If you’re going to do something, it pays to do it right. Nothing was more correct than custom-made Budnik wheels with Mickey Thompson 26×15 Sportsman rear tires. The fronts are Dunlop 15×6 radials.

Next on the to-do list was the interior. A multi-point cage was custom made and color matched. The Recaro bucket seats were modified and covered in ivory and blue leather. A custom center console was fabricated, as were door and cab panels. The cab was carefully traced out so matching leather-covered panels could be fitted into place. A tilt steering column with a Budnik wheel and billet stems provide the controls. Pile carpet was laid down and billet door handles finished the job. 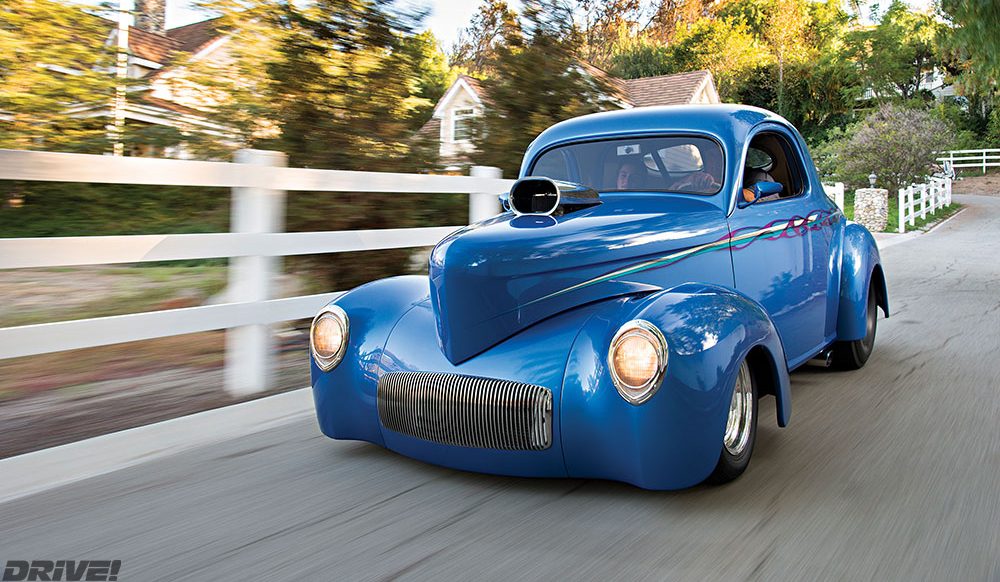 The look of a ’41 Willys is unique and remarkably distinctive. Jordan’s crazy coupe is an intimidating runner. The dual 3-inch exhaust with side exit tips and the whine of the B&M Mega Blower announces its

The custom-made dash is the result of hours of fabricating, fitting, smoothing and finishing in matching PPG paint. It was married to Dakota Digital gauges behind smoked Plexiglas.

A build of this magnitude requires a deep level of commitment. What makes this one even more critical are the childhood and teenaged memories it was bound to rekindle. To live up to that lofty status, the body and paint needed to be dead on, stone cold perfect. The body was sanded to glass-like smoothness. Then, it was primed and graphite sprayed to reveal any and all imperfections. Next it was back for additional hand sanding prior to being sprayed with twostage PPG Blue Wave Metallic for the exterior color, a hue akin to that used on the famous Stone, Woods & Cook gasser. 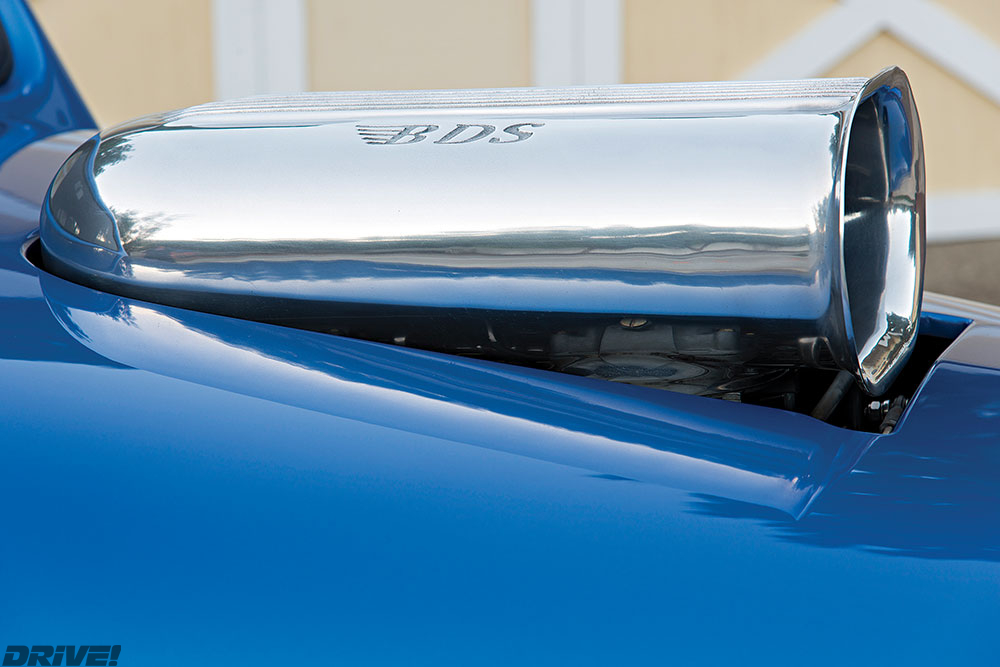 Just when you believe you’re almost done, you stand back, look at where you are, and discover you’re not even close to finished. The Willys was returned to Rick’s Auto Restoration in El Cajon, California for additional interior modifications. The aluminum gas tank was sealed before being covered in leather and topped with a competition flip cap. Gas pressure lifts were polished and a long list of detail items were handled. While at Rick’s, a 3-inch exhaust system was custom made and installed featuring side-exit paths and plated tapered tips. While testing out the exhaust note, a half-throttle run up a nearby freeway onramp revealed a glaring issue; torque lift, also known as pulling the front wheels off the ground. This was nothing a proper set of wheelie bars couldn’t solve, but common and proper are two different things. Off the rack would work, but custom tailored was better. A special unit was handcrafted using precise spring tensioning, and all components were chromeplated and polished to perfection, of course. 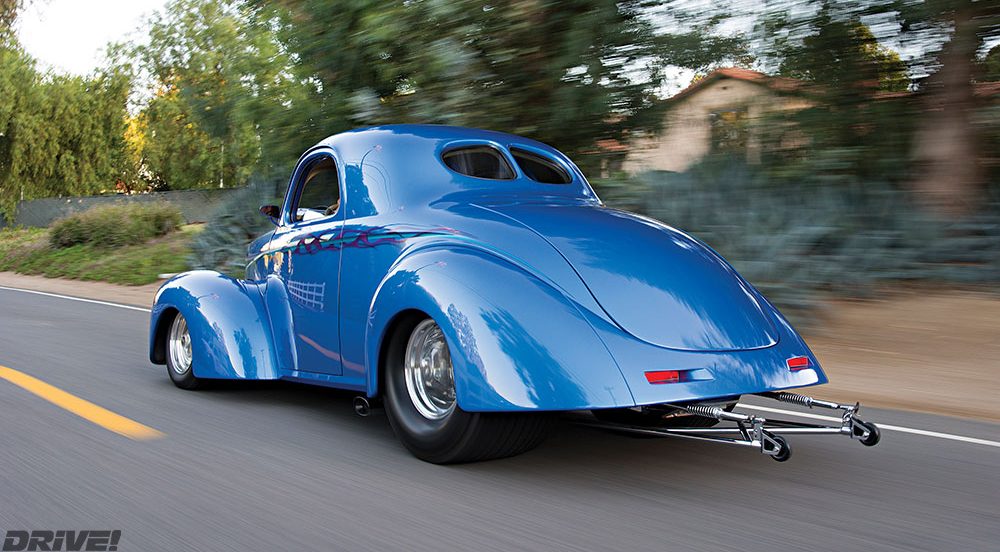 Although it prefers a straight line, this wild machine has been on a crosscountry trek participating in an Americruise and Power Tour.

Now it’s done. No, not quite. There was still something missing. The final touch of custom paint was yet to be added. Here is where the benefits of wisdom and discipline came into play. The impulse would have been to have trendy graphics, vintage scallops or a full flame job executed. However, cooler, classier heads prevailed. Mark Brink, a custom painter known for his innovation and quality work came up with a ribbon overlapped with flames. The subtle, yet effective design was applied on a tamped angle from the hood’s point to the body’s beltline, culminating with a final lick that is in concert with the rear fender contour. That was it. No accenting pinstripes or designs were needed—neat, clean, perfect. Once Brink had done his act, the entire body was cleared once again, cut and buffed. Most Pre-Street cars install wheelie bars for show. Here they were added as a necessity.

With 1,000 hp sitting just a gentle push away from the right foot, and an equal amount of hours going into the build, you’d think this wild ride would become a trailer queen. The fact is it participated in a cross-country Americruise, as well as regional legs of a Power Tour. There was a bit of detuning and a gear change to bring the fuel mileage up to 10 mpg. But, once the events were over, the optimum pulleys and gears were reinstalled to once again make this a wolf on Main Street.

Building a ’41 Willys is a tightrope affair, especially one that dares to have any visual connection to one of history’s famous drag cars. However, the Jordan family collection offers such a ride. Wherever it’s shown, this high-end build has the ability to create new memories and join the list of iconic Willys coupes. 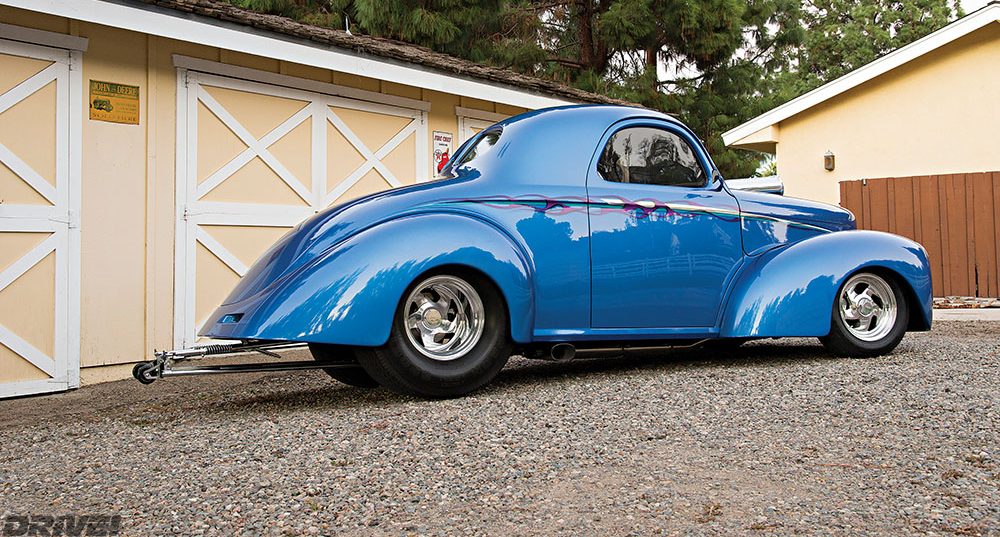 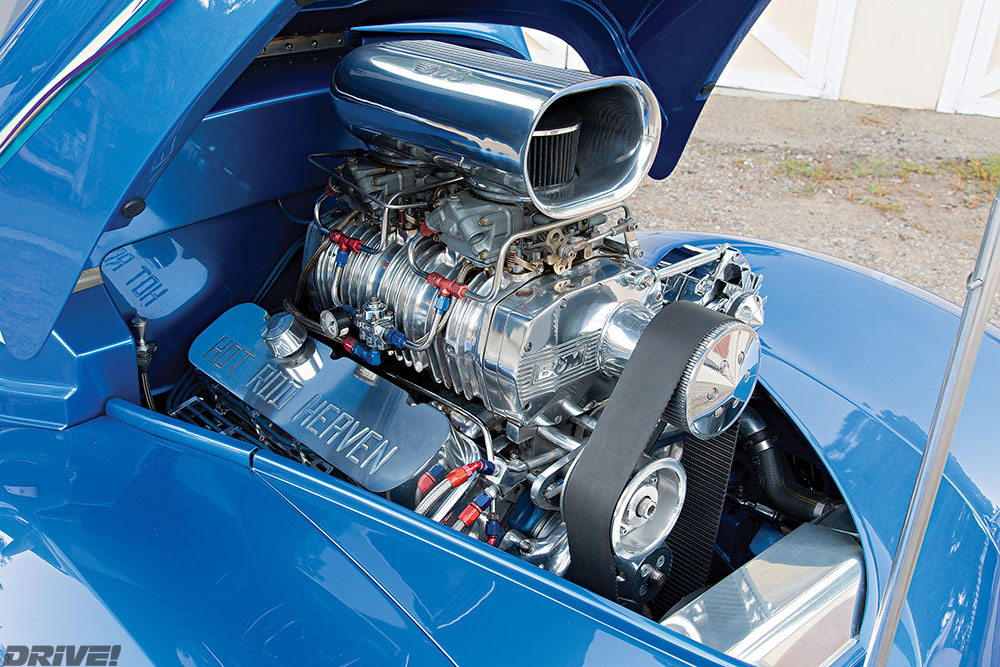 Pumping 1,000 hp from a blown big-block was the job of Wayne Halabura. The engine is a flawless blend of muscle and beauty. This is Pro-Street performance at the top of the game.