CGS Performance Products, based in Chino, California, is best known for its stainless steel exhausts and cold air intake systems, but for more years than we can remember, CGS has been building custom vehicles for the annual SEMA show. The crew has built cars, trucks, SUVs and everything that is the “latest and greatest” from the OEMs. The crew at CGS has won many distinguished awards at the SEMA show, such as the GM Design Award, Ford Product Excellence Award, Chrysler Design Excellence Award, the Outstanding Achievement in Design from Ford Motor Co. (three times) and many more throughout the years. This year, the company has put its expertise into this 2’11 Camaro. 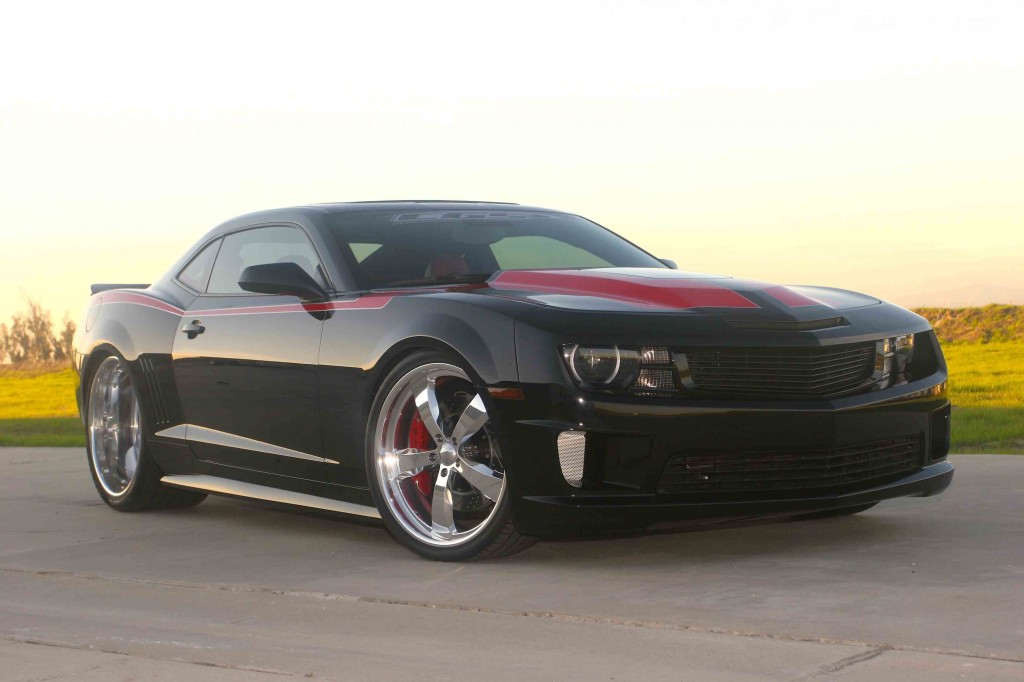 We’re pretty sure that you’ve seen the cover for this issue, so you know that this Camaro has plenty of power. The cover shot is one of the first in a sequence. In fact, the CGS guys literally melted the tires for us and after about the fifth or sixth shot, there was so much tire smoke that nothing was visible except, well, tire smoke. The crew at PPC Customs in Clovis, California, built the engine, and the main component is the Whipple supercharger. Of course, there is more here than meets the eye, as PPC added many internal components that add up to brutal horsepower. A COMP Cams Thumper cam and COMP Cams valve springs and lifters take the pressure the Whipple unit gives them, and an MSD ignition system provides the sparks. An ARP Fasteners engine hardware kit ensures that everything stays in place no matter how hard the throttle is pushed. 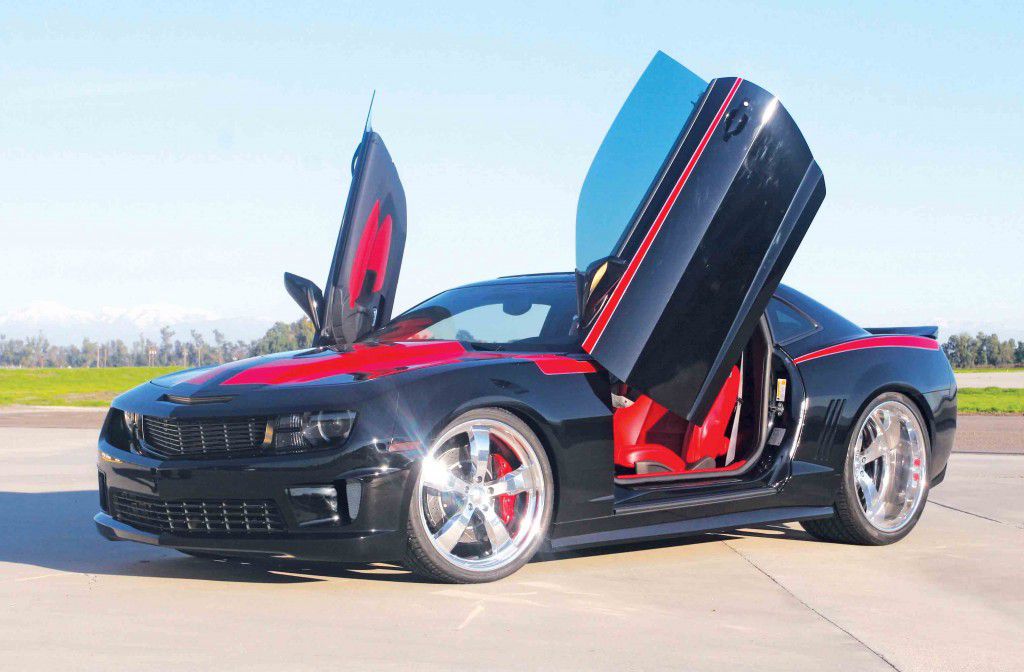 A CGS Motorsports Cold Air Intake ensures plenty of air reaches the engine, while the Hedman headers and complete CGS exhaust system get the spent fuel out quickly. The CGS system is made up of its stainless steel cat-back exhaust system, which includes mufflers and cool SS exhaust tips. 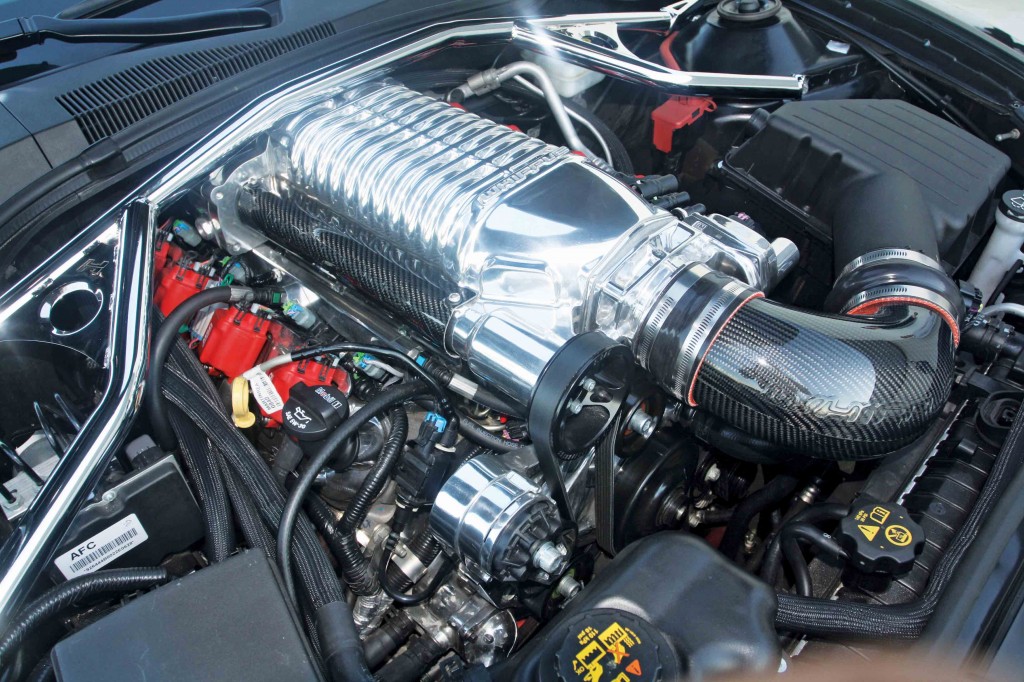 Thanks to the Whipple supercharger there is no shortage of power or style.

A fast car needs good handling characteristics, so CGS used a combination of some of the biggest names in the business to get the job done. The front suspension has been upgraded with Eibach springs and sway bar, and a Hotchkis strut tower bar. Further back, a Chris Alston’s Chassisworks canted 4-bar kit combines with the narrowed Alston Chassisworks Fab9 rearend. The Fab9 features a Strange Engineering center section and Strange S/T series axles. An all-aluminum driveshaft by Reeldriveline.com connects the tranny to the rearend. 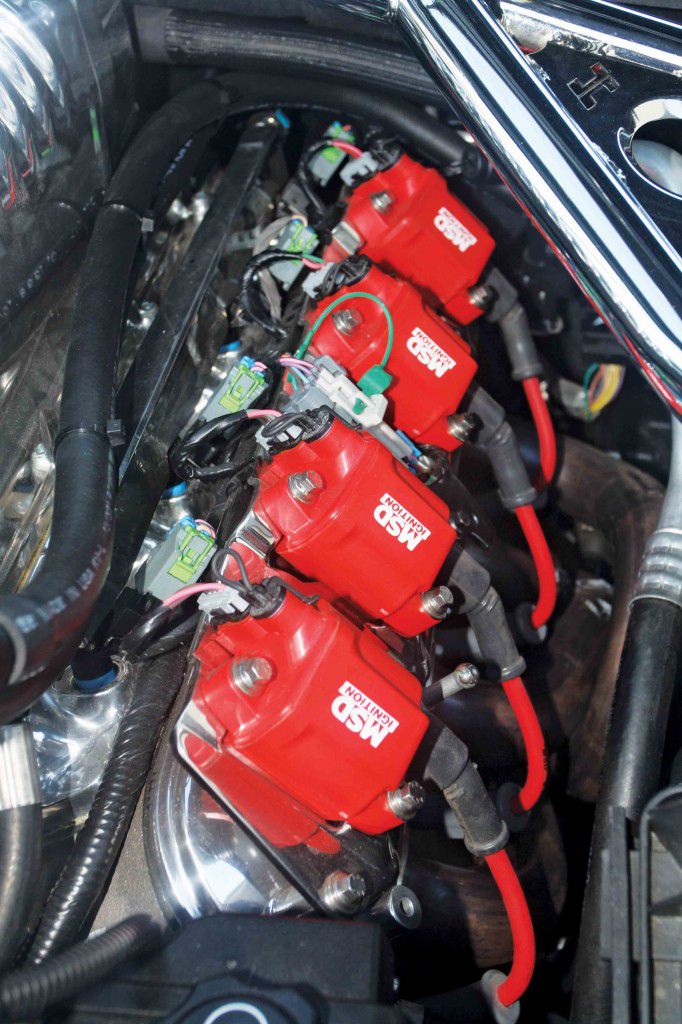 The line of MSD ignition components ensures that spark won’t be an issue.

A fast car also needs good brakes, so CGS chose Baer components for their Camaro. On all four corners, Baer Racing Brakes six-piston calipers put the squeeze on the 15-inch slotted and drilled rotors. CGS also used Boyd wheels that have been wrapped with Pirelli tires. The front units are 22 x 8.5 inches covered with 265/30/R22 tires, while the gigantic rear units are 24 x 15 inches tall with 405/25/R24 tires. The result is dramatic, to say the least. 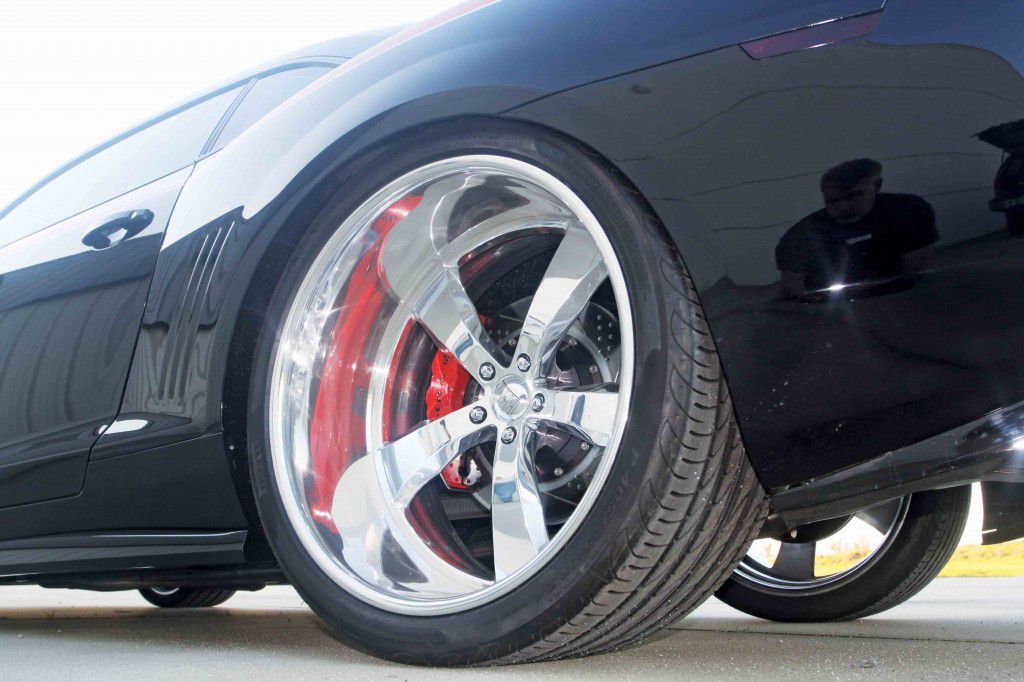 There’s plenty going on here, as huge 24-inch Boyd wheels, 24 series Pirelli tires and Baer brakes are all visible in this single shot.

Dramatic also describes the exterior of the car. There is little doubt that the Camaro has an aggressive look. This comes from a melding of products that work together very well. The hood, which features a clear panel over the supercharger, and the front bumper come from Advanced Composite Specialties, while the Havoc body kit (side skirts, rear wing, rear diffuser) are products by Innovative Vehicle Solutions. The resulting look is wide and mean. The Camaro looks like it would be at home on an SCCA track as much as at a show and shine event. Adding to that aggressive appearance are the red graphics that were painted by Andy Meeh of Classic Auto Restoration in San Diego, using DuPont paint. Meeh and CAR also added the body panels. Tint Works in Chino, California, provided the blacked out look that works so well with the rest of the car. 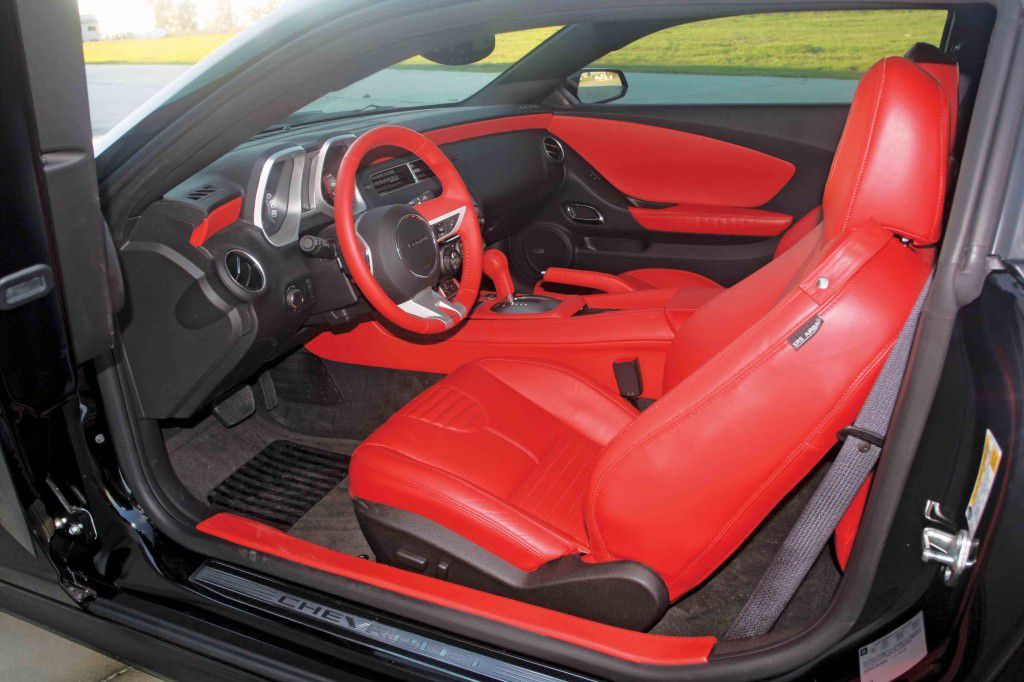 Sitting in the Camaro is like sitting in an erupting volcano. The Pecca Leather seat covers combine nicely. A DSV Custom steering wheel, shift knob and counsel trim package complete the look.

There is no missing this interior because CGS used a Pecca Leather kit to transform the interior into something like a scene from Dante’s Inferno. A DSV Custom steering wheel, shift knob and counsel trim package complete the look.

What was the result of all of the CGS crew’s hard work? Only the GM Design Award, that’s all. Yep, once again CGS came out on top of every GM car or truck that appeared at the 2010 SEMA show. Of course, building a winning vehicle isn’t a one-man job (or in this case, a two-man job), and Casey and Ron wanted to give special thanks to 3M as well as everybody back at the shop, including Robert Henry for helping with the complete build on this project. We can’t wait to see what they come up with for the 2011 SEMA show. 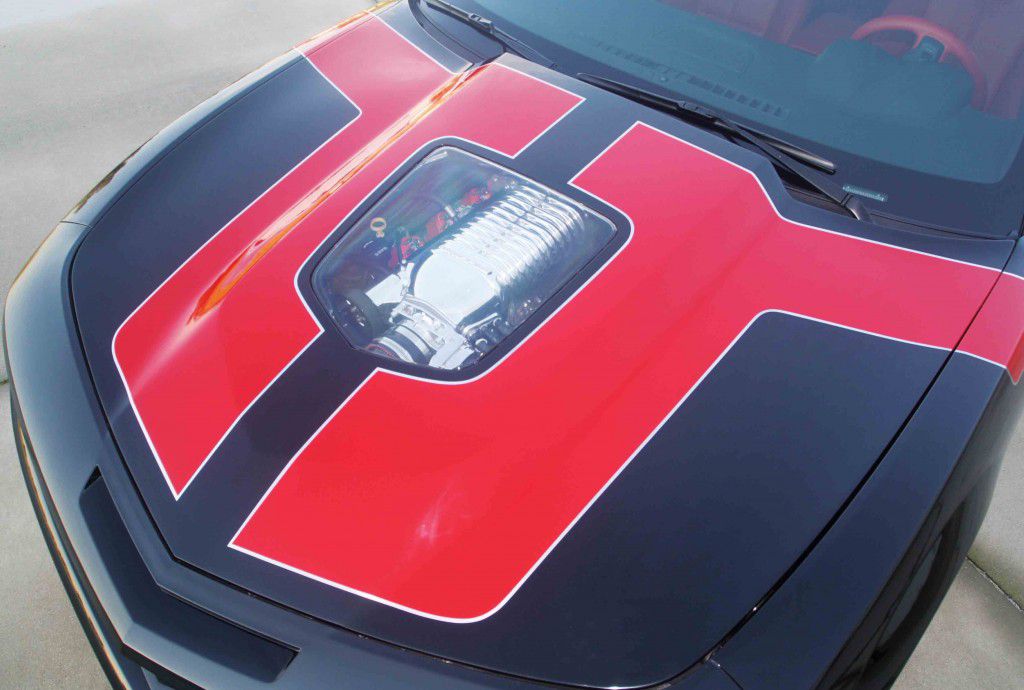 Seeing is believing, and the Advanced Composite Specialties hood gives everyone a good look. The red graphics are thanks to the DuPont paint applied by Andy Meeh of Classic Auto Restoration. 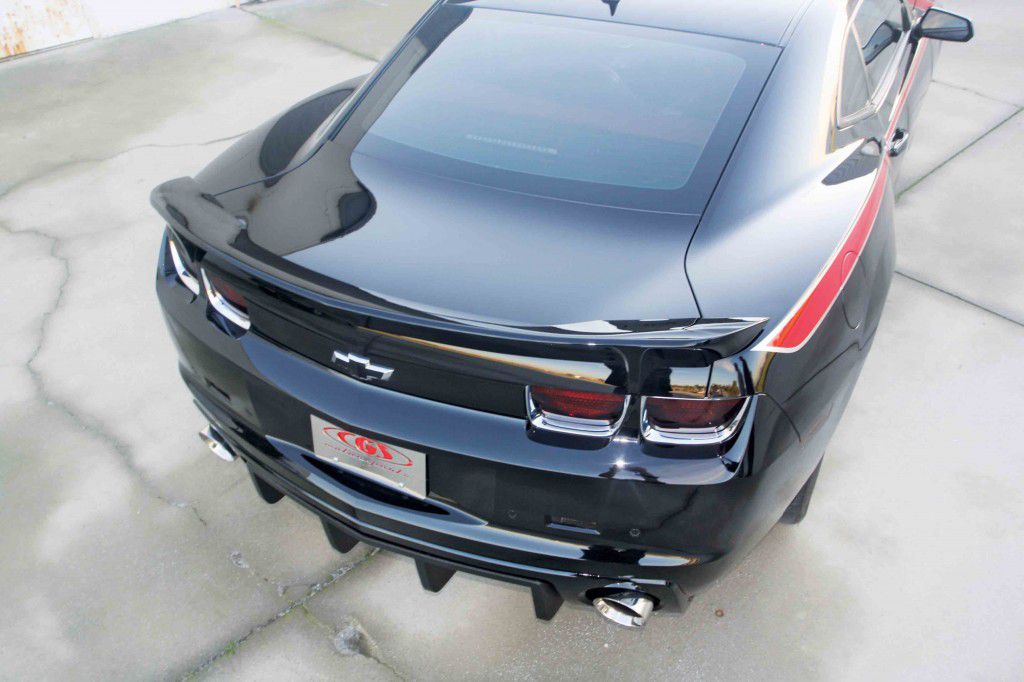 An Innovative Vehicle Solutions Havoc rear wing completes the look of the rearend.