Text and Photos by Travis Noack

In the world of ‘60s performance cars there are few rolling masterpieces more coveted than the Corvette Stingray. Its lines revolutionized a performance era that had just begun to hit the red line, and their lightweight fiberglass construction made them prime candidates for road racing and all sorts of high-speed track situations. Fast-forward 48 years, and the 1963-67 body style Corvette is still a prime player in the world of full throttle performance. 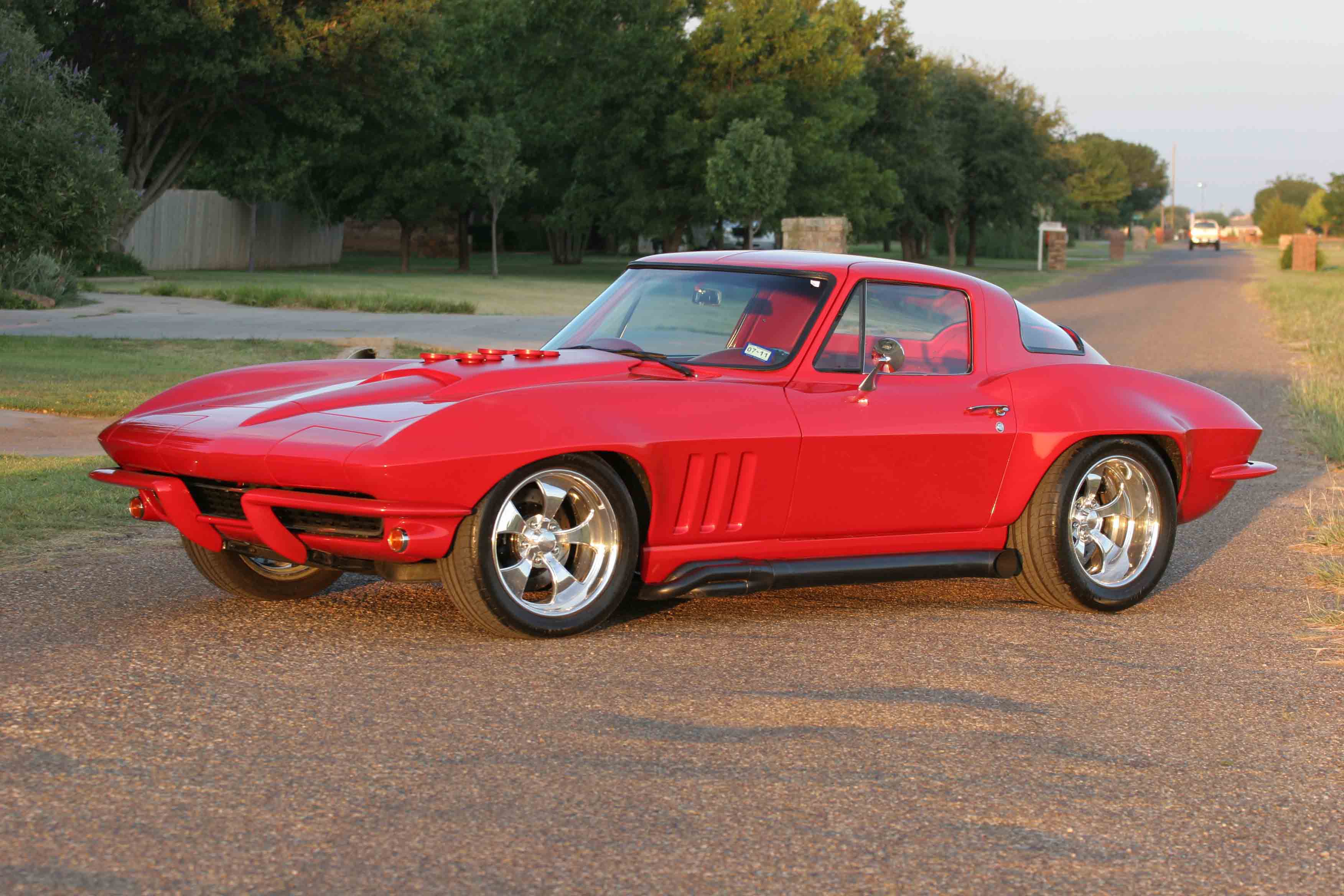 Dr. Walter Kushman always had an affinity for the early ‘Vettes, and when a numbers-matching ‘66 Stingray with a 327/four-speed combination popped up for sale, he had to have it. Ownership of the ‘Vette was a dream come true, but the factory blue hue and the small-block were not at the top of the Doc’s checklist. He wanted it painted “arrest me red,” and it had to have a big-block. 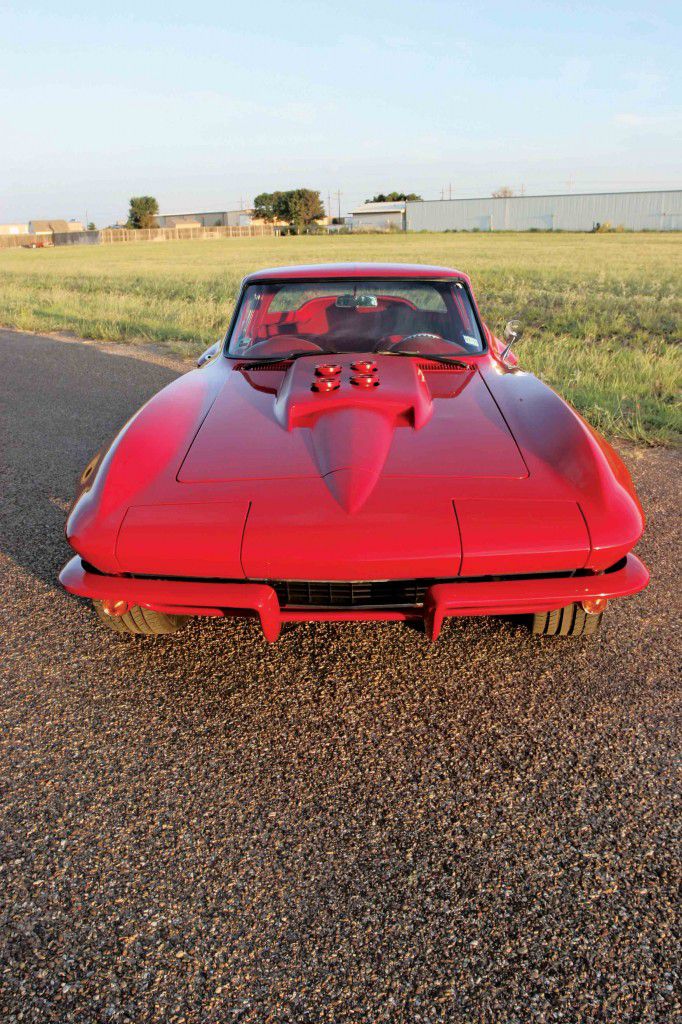 The lines of a classic ‘Vette are unmistakable and aggressive from virtually any angle.

To get the power plant portion of the project underway a 502 big-block was delivered to Brian Teal at Teal Automotive in Lubbock, Texas, and punched to 509 ci. A custom-ground roller cam provides the perfect lift and duration for the large-valved Brodix cylinder heads, as Wiseco slugs pinned to Manley custom-fit rods are pushed and pulled by a Scat crank. The block was fully machined at Sunset Race craft in Lubbock before Brian assembled the stout mill. 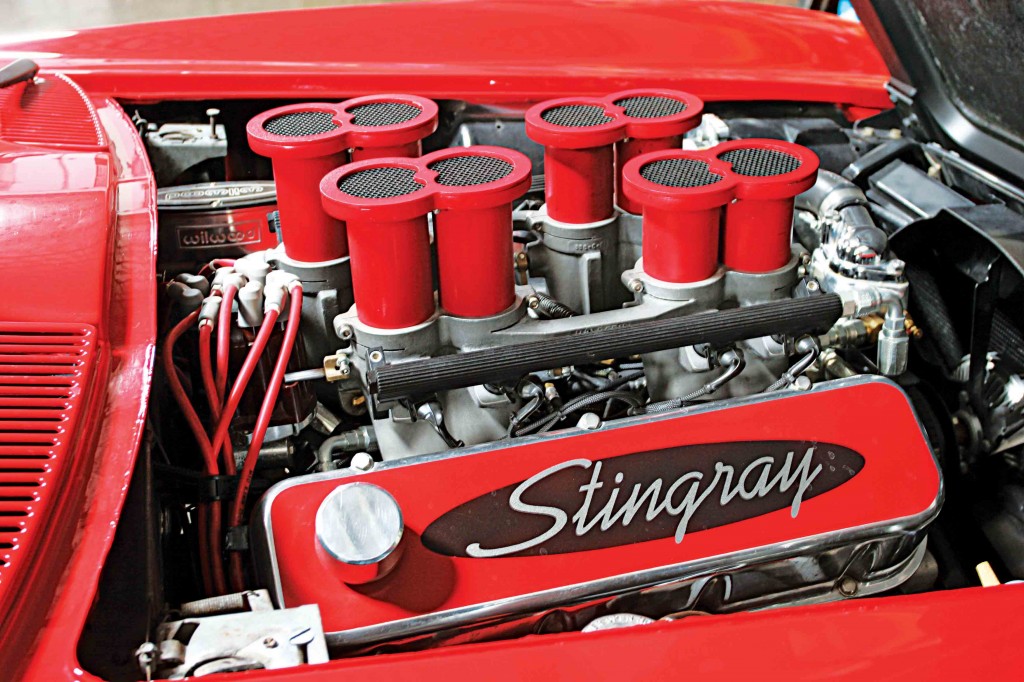 A mystery 509-ci engine (the builder won’t give us specifics on compression ratio, cam size, etc.) is topped by a Hilborn electric fuel injection unit installed and tuned by Ricky Pope. We don’t hold it against engine builder Brian Teal of Teal’s Automotive; if we had the secret to making a big-block plant your spine against the seat, we wouldn’t give it up either.

The engine was then delivered to Ricky Pope in Lubbock, where the Hilborn electronic fuel injection was installed and expertly tuned. Engaging the classic Muncie four-position box is a Centerforce clutch ensuring smooth gear transitions when the Doc is off the clock. Hooker Headers side pipes ventilate the 509-ci tire roaster when Wally dumps the clutch and mashes the pleasure pedal. Joe Flynn at A&B Muffler in Lubbock modified the side pipes to allow the engine to breathe deep, and the leg burner microphones were coated in HPC black high-temp coating for durability and good looks.

Once the power plant was in check, this classic glass was delivered to Hill’s Hot Rods and JD Glassworks to put the shine on the surface and between the doors.  Jason Hill designed the build concept and the project was underway. The transformation began by setting the attitude of the car with an adjustment of the stance. The car was brought down 3 inches in the front thanks to a slightly trimmed 2-inch dropped coil spring and the weight of the big-block. In the rear, the distinctive Corvette tail section fell 4 inches by way of a composite mono-leaf. The car was then planted over 17 x 8.5-inch front and 17 x 10-inch rear bonspeed Quasar billet wheels mounted on Michelin Pilot rubber. 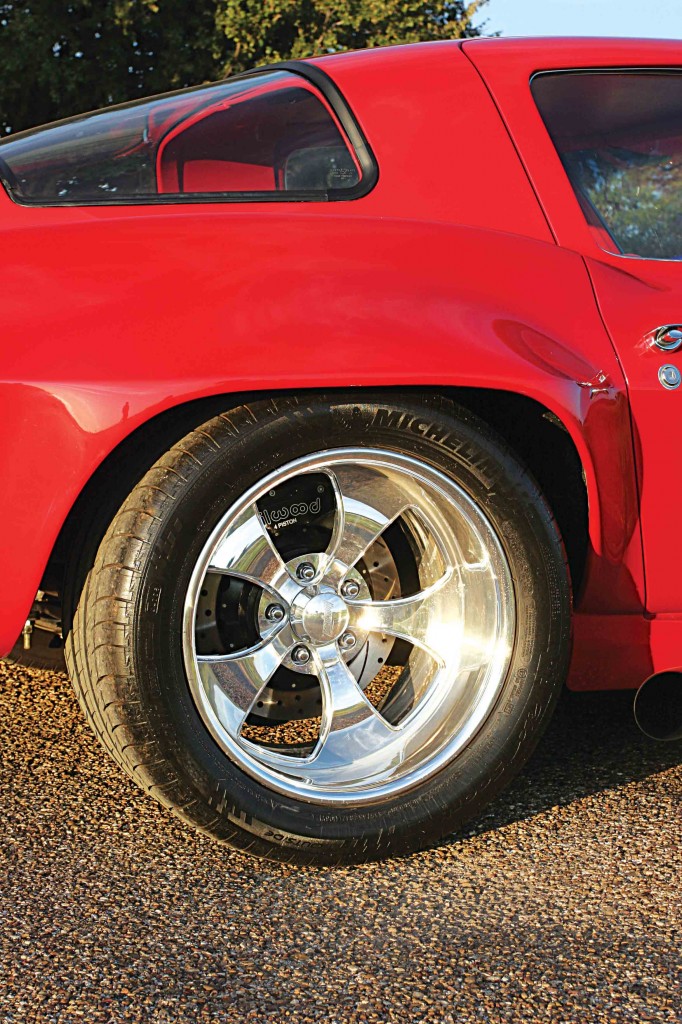 Custom-designed flares penned by Jason Hill and built and shaped by Jimmy Davis wrap nicely over the bonspeed Quasar wheels and Michelin rubber.

A pair of P245/35ZR17 front and P315/35ZR17 rear Michelin donuts takes punishment after the Doc’s stressful work day with Wilwood six-piston front and four-piston rear brakes, ensuring there are no on-road emergencies. 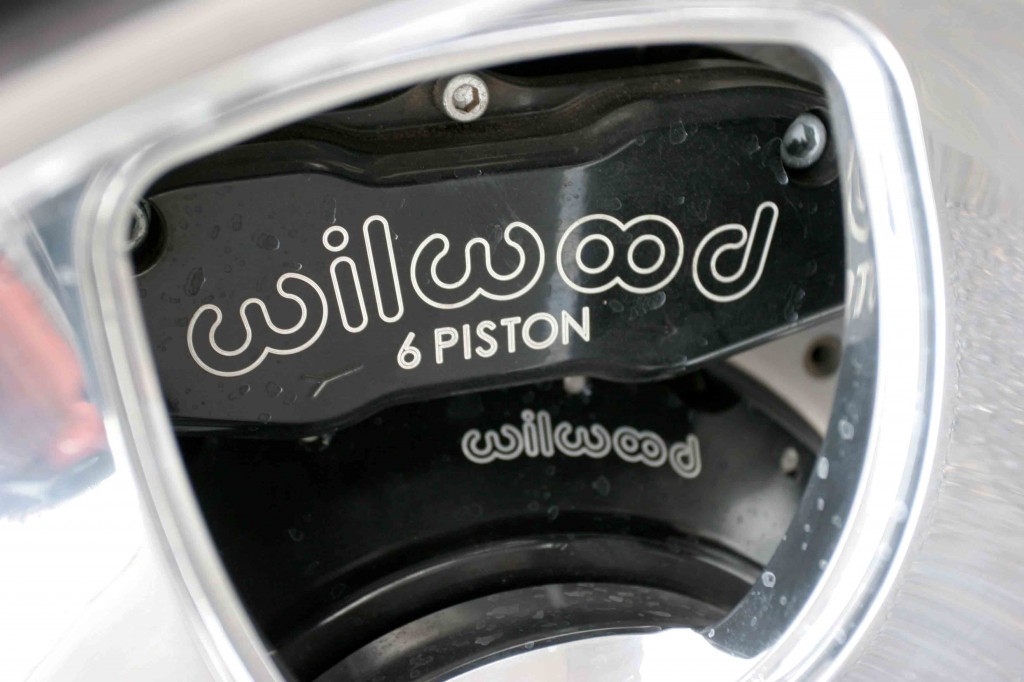 Wilwood six pistons up front and four pistons in the rear bring the ‘Vette to a safe stop when Wally really opens the big-block’s throat.

When it came time to massage the 45-year-old glass, Jason Hill of Hill’s Hot Rods and Jimmy Davis of JD Glassworks teamed up to give the Corvette a retro, yet modern, chiseled look. The Doc wanted flares for a bit of ‘70s styling, but the guys at Hill’s and JD tweaked the typical Corvette flare to better complement the lines of the car. In fact, a custom set of flares was designed from scratch that were penned up by Hill and shaped and grafted in place by Davis. Once the custom-designed fender flares were ‘glassed into place, the body sculptors at Hill’s sanded and smoothed every curve to perfection, and the car was blocked and smoothed. Hill loaded up his spray gun and smothered the vintage glass in PPG custom-mixed red.

Stay tuned for a closer look at the audio system and interior work!