Text and photos by Bob Ryder 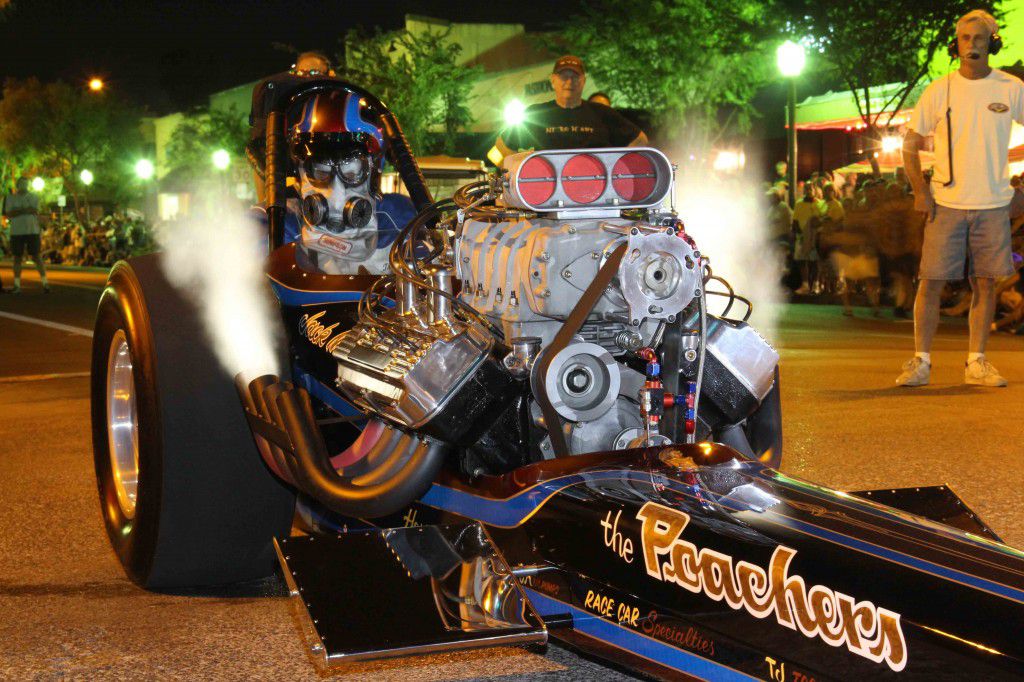 Walt Stevens in the seat behind the flames of the Poachers Top Fuel Dragster owned by Paul and Pam Schavrien.

The afternoon started off with the arrival of the main characters of the show, the Top Fuelers. They were transported like in the old days, strapped onto an open trailer behind a ‘60s era pickup or station wagon. Spectators casually strolled though the pits checking out the vintage 1320 machines of yesteryear and chatting with the crews about drag racing’s past. One of the celebrity racers from the golden era, “TV” Tommy Ivo, was on hand signing autographs and reminiscing about his glorious career doing battle behind the butterflies. The night began with a static Cacklefest. As each dragster was fired up, the huge crowd would hustle to gather around the fire-breathing beast.

Later in the evening when the sun went down and darkness filled the sky, three blocks of Grand Avenue were cordoned off. It was estimated that 25,000 spectators lined the sidewalks all the way down on both sides of the avenue. The divided lanes of Grand served as fire-up lanes. Engines were fired using handheld starters, and then vintage push trucks slowly pushed them down Grand, simulating the old fire-up lanes at hundreds of drag strips across America back in the day. As they moved down Grand with all cylinders lit, spitting healthy nitro flames, the drivers raised their hands signaling the push trucks to back off, letting the rides coast down to the mock-up starting line. Once staged, the old dragsters continued to cackle, rapping the throttle occasionally to the delight of thousands of spectators. As each pair shut off, the crowd went nuts, yelling and screaming for more.

The night is one I will remember. Thanks, for the great show. 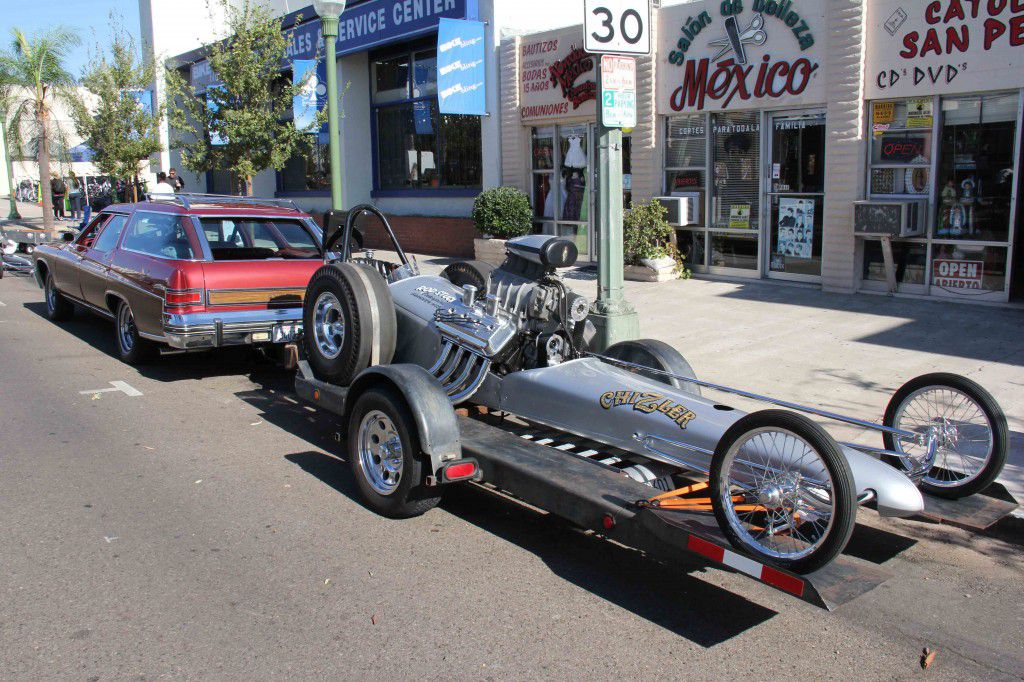 Most of the dragsters were towed on open trailers, just like they were back in the day, by period-correct tow vehicles. Ron Johnson’s Chizler was towed by a ’67 Buick Estate wagon. 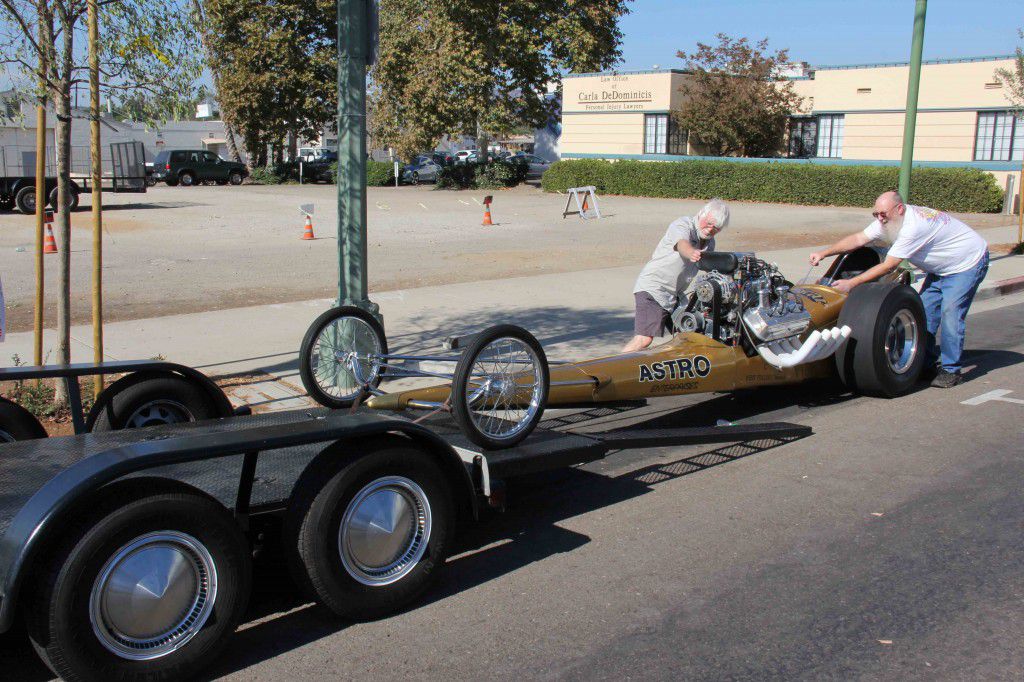 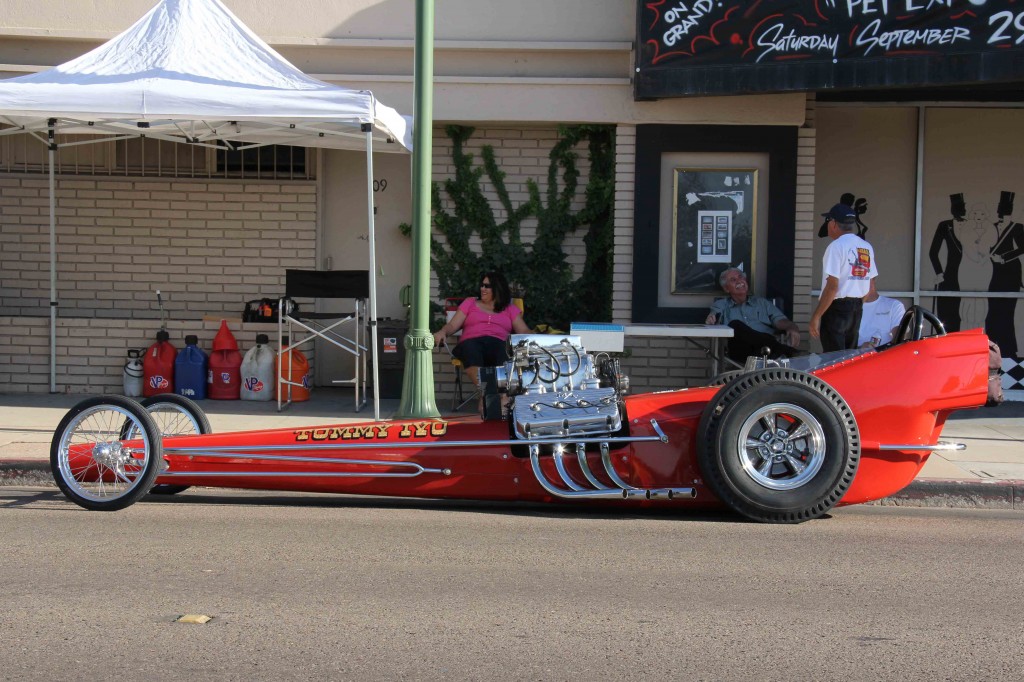 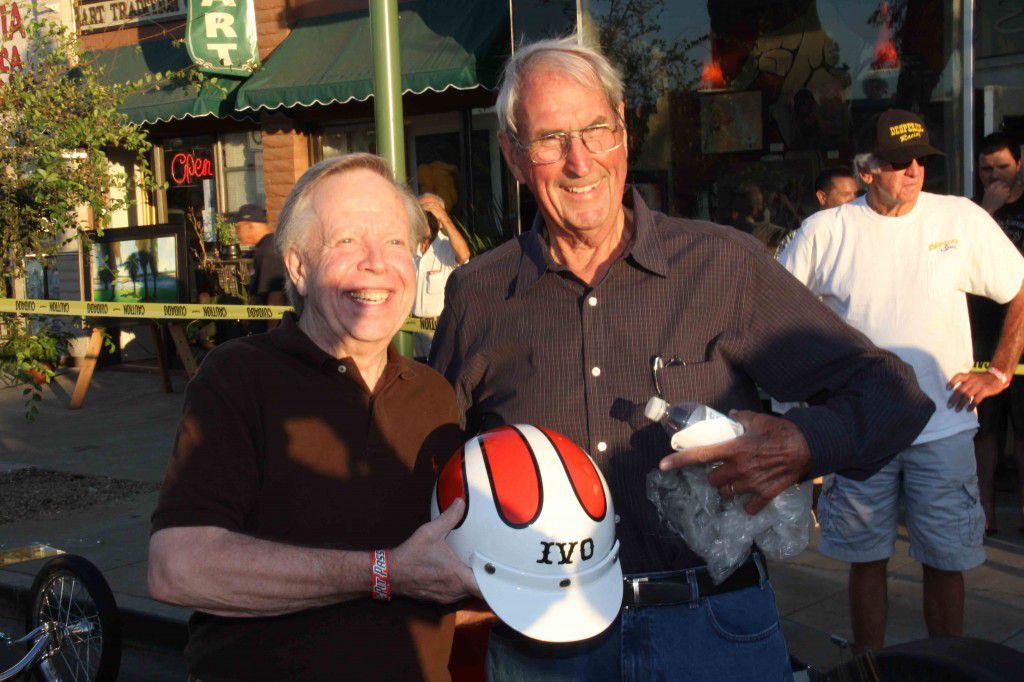 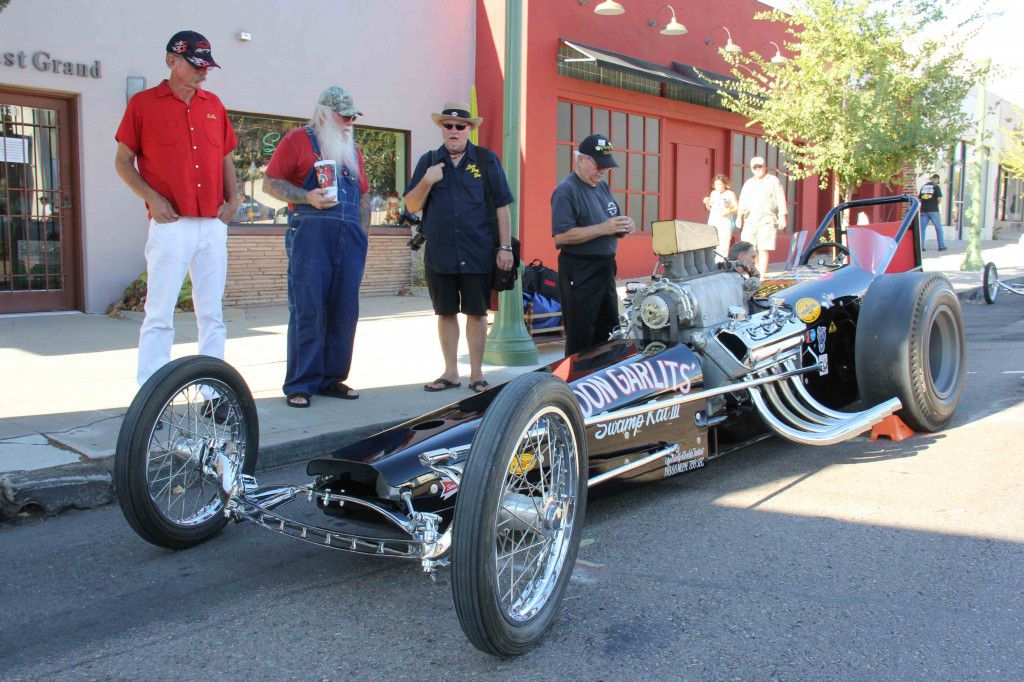 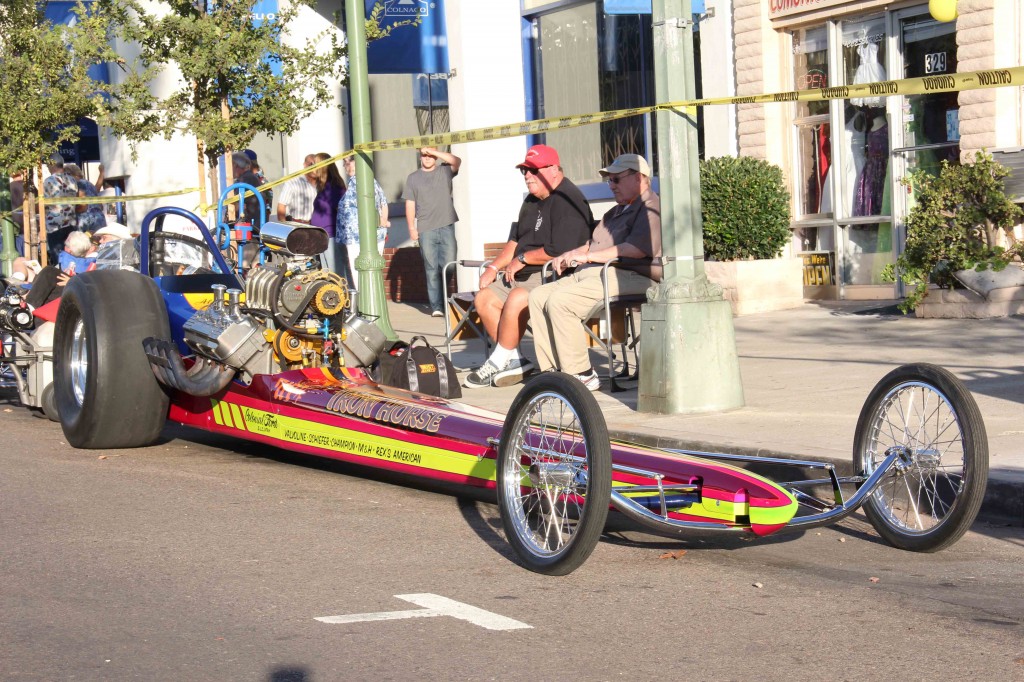 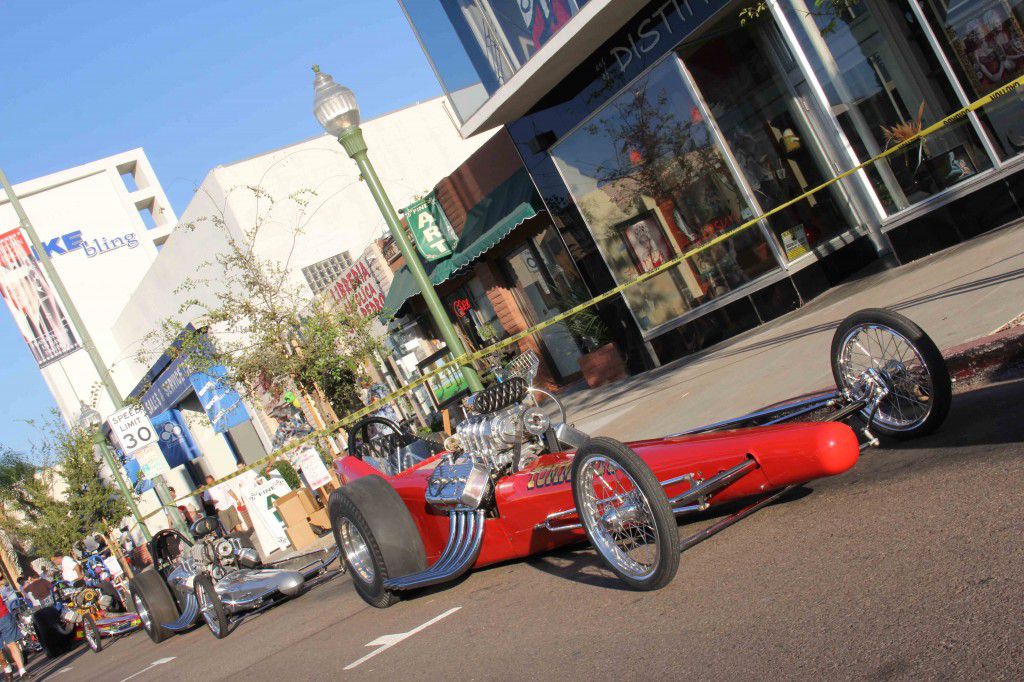 Lined up and ready to rumble. 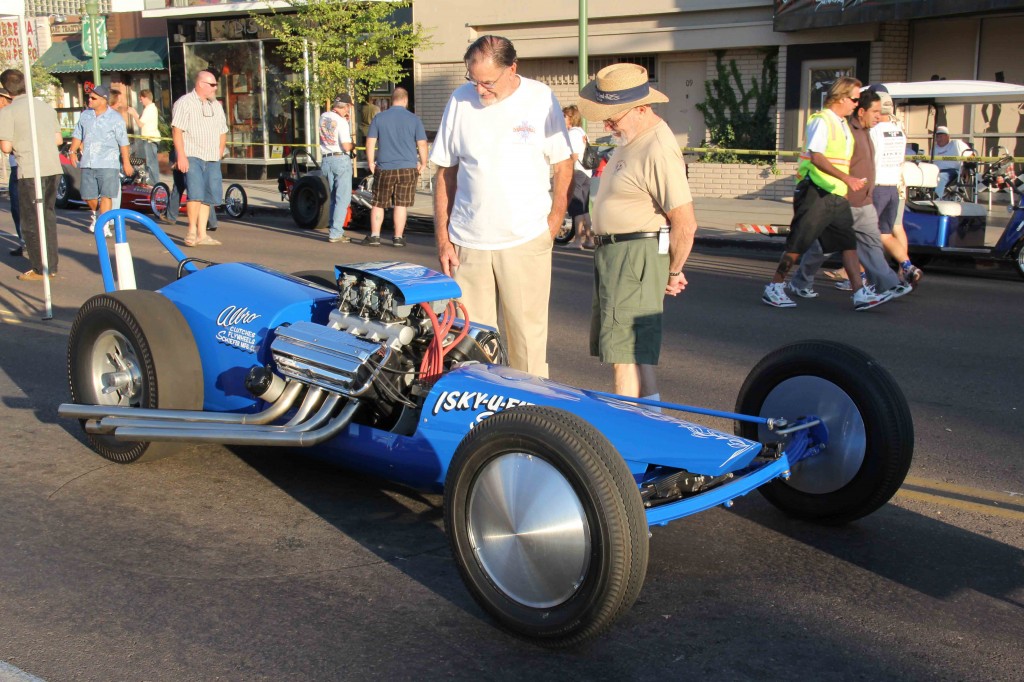