D&P Chevy Flexes Its Muscles with this ’71 Chevelle

Times change, and for those who want to compete in this ever-changing world, companies must change, as well. D&P Chevrolet in Huntington Beach, California, has long been known for its killer Tri-Five Chevys. Many of the cars built by Darryl and Peggy Nance have graced the covers of magazines, and throughout their 20-plus years in business, they have built up a considerable clientele heavy into the Tri-Five scene. Though they have dabbled in other forms of Chevys, Tri-Fives are still a huge part of the couple’s business.

Muscle cars are the hot ticket now, though. So D&P decided to enter the arena, due in a large part to their son Patrick, who wanted to build a mega-horsepower muscle car that had all the current tricks. He wanted it to have the latest in suspension, brakes, paint and interior, but especially stereo and other electronic items.

Having settled on a ’71 Chevelle two-door hardtop, the Nances started where they always do: pulling the body off of the frame and stripping off all of the accumulated road debris and old paint. 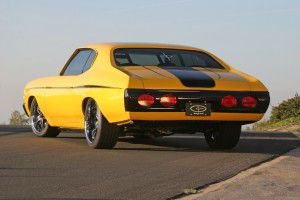 The Nances settled on this '71 Chevelle.

When finished and freshly painted, the stock suspension components were replaced with a full Global West suspension system. The front units consist of upper and lower tubular A-arms, while the back was outfitted with GW upper and lower control arms, rear frame supports and Romic coil-over shocks. Speaking of the rearend, it’s a 12-bolt unit from J&S Gear, equipped with 3.73 gears and a posi unit. Huge, six-piston Baer brakes front and rear make sure that the large Chevy is brought to a quick halt, no matter what the conditions. This model Chevelle has large wheel openings, so D&P was able to stuff 20 x 9.5-inch U.S. Wheels (rear) fitted with 285/35-20 BFGoodrich tires, while 19 x 8 units with 245/40-19-inch BFGs reside up front. 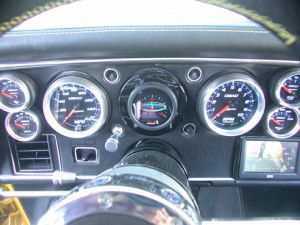 Into the stock dash went a host of Auto Meter Cobalt gauges.

Other tricks include the Pioneer head unit and the Boyo monitors.

While the D&P crew was working on the frame, the body was on the rotisserie. D&P does all of its own paint and bodywork in-house, and they smoothed all door handles, badges and anything else that got in the way. Patrick Nance says he has a hundred hours in the bumpers alone! When ready, PPG custom-mixed a three-stage yellow/pearl metallic for the car, which works well with the black stripes/graphics that were added later. Working equally well is the Strut grille and blacked out bumpers, which are painted, not powder coated. Adding that perfect touch are the Steve Van Demon graphics, which were applied using PPG gloss black paint.

One of the few areas D&P outsources is the interior. With Stitchcraft only a few blocks away from the shop, it’s little wonder. Revo Reeves, owner of Stitchcraft, has been constructing custom interiors since 1978, and the attention to detail that he displayed with this Chevelle only further cements his reputation. Using black leather, suede and faux stingray skin, he covered the Sparco seats, custom-made the door panels and center console, and used Porsche black carpeting to cover the floor. Stitchcraft also made the unique speaker enclosure that replaces the rear seats.

A Momo steering wheel sits atop the ididit steering column, while Auto Meter Cobalt gauges have been added to the heavily altered stock dash. Into that dash went items that no muscle car could be without. Items such as the Vintage Air A/C unit, a Pioneer head unit that is pumped up with two Memphis amps and run through Momo speakers, and the Boyo monitors. The cameras are located so the monitors show to the rear and side of the car. A Keisler floor shifter protrudes through the console. With the power that the Nances had planned for the car, they thought that a full roll cage would be a good idea, so they fabbed one up, as well. 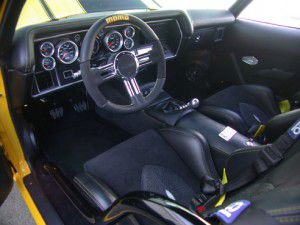 The black interior is all business. A full roll cage protects the occupants while pushing the engine/tranny combo to its limits. 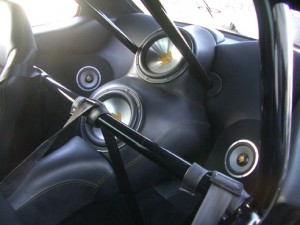 Custom-made by the crew at Stitchcraft, the speaker enclosures house multiple Momo sub and midrange speakers. 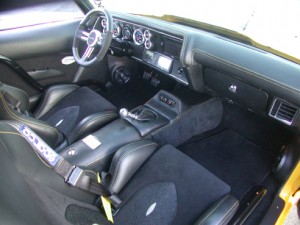 All in all, the interior is spacious, comfortable and filled with trick items that give the Chevelle the best of all possible worlds.

No one has ever accused D&P of not going all out, and their choice of engine for the car proves it. Not content with a crate engine, they instead chose to have Tra-Co Engineering build a 355-ci Donovan block. Known for its high-performance racing engines, Tra-Co built the engine with a 10.5:1 compression ratio, and uses COMP Cam valve train products to go along with the Donovan heads. A Tra-Co intake manifold guides the fuel from the 850 Holley carb into the depths, while the March air cleaner provides, well, clean air. Speaking of depths, a Milodon oil pan and a Mellings pump ensure that the mill is well lubricated. The spent fuel is guided by Doug Thorley headers to the Flowmaster mufflers via tubes that were coated by Specialized Coatings, while a March Performance pulley system guides the serpentine belt.

Producing 550 horses, it needs a high-performance tranny, that’s where D&P went with a Tremec six-speed transmission that had been enhanced by Keisler Engineering of Tennessee. 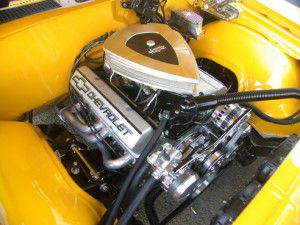 Cars like this aren’t built in a vacuum. The crew at D&P wants to thank Original Parts Group, who supplied all-new trim parts, Electric Life and all of the other companies that helped with this build. 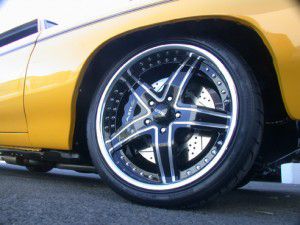 While the Chevelle may be one of the first muscle cars that D&P Classic Chevrolet has built, it’s a good bet it won’t be the last. D&P’s philosophy is that they build cars that look and work great. With Patrick Nance coming more into his own as a builder, we’re willing to bet he will be pushing his folks to become as well known for their muscle cars as they are for their Tri-Fives.