Text and Photos by Anthony Grimes

Blake Foster, owner of Blake Foster Speed Tech Performance, is well-versed in building high performance muscles cars and his newest creation does not disappoint. Blakes ’72 Nova started is life as a Super Chevy build project that Speed Tech had sponsored, donating the front sub frame and rear torque arm suspension. About half way through the build, the original owner contacted Blake explaining the build would not be able to be completed. The original owner and Blake worked out a deal and the car came into his possession and with so many Speed Tech parts already on the car, a new project began. “I named the car ResurreXion because it started life as a Super Chevy build, spelling includes the ‘X’ for the Nova body style,” Blake adds. The vehicle was shipped crossed country and after it arrived, upon further inspection, they discovered that the original workmanship was not up to their high standards. “We decided to completely strip the car including: removing the sub frame connectors, roll cage, and sand blast the entire car,” says Blake. 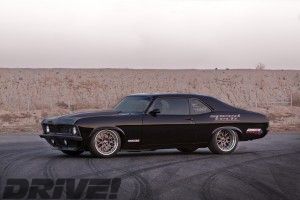 With a blank slate in hand, Blake set out to build a car that was street legal as well as being fully track ready, which is no simple task. However, knowing exactly how he wanted to car to look, the build went very fast. After receiving the car on May 13th they had only a few short months to get it ready for the Good Guys West Coast Nations at the end of August. The first thing that needed to be done was to lighten the car up. “The Nova bumpers suck, not only do they look heavy but they are heavy,” Blake says. So he and the boys at Speed Tech grafted in a ’69 Camaro tail light panel and rear valance, but swapped the tail lights too. This allowed for a Camaro rear bumper to be used after it was shortened and sunk into the rear quarter panels. This results in a unique one off look and significant decrease in weight. Up front the Nova valence was replaced with the Camaro valence and the front fenders were extended to fit. Also the Camaro’s turn signals were replaced with driving lights, and the nova bumper was cut and sectioned to fit it tight to the body. Finally all the trim pieces were painted the base coat color and finished in a flat clear for that beautiful matte finish. The cars appearance is inspired from the traditional road race cars, with a street car twist that results in an impressive looking machine. With a car that looks so good, and being an owner of a high end performance shop, Blake added plenty of performance to match. 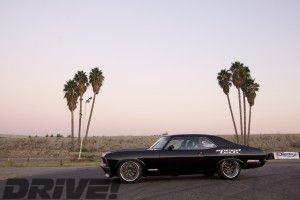 Under the hood features a ’06 GM 6.0L engine with Eagle H Beam rods and Manely flat top pistons with a compression ratio of 10.75:1. All the custom machine work was done by Richmond Engines of Langley, BC and including balancing, squaring the decks, honing the lines and torque plate and the heads were cut 0.030. Then a new Comp Cams camshaft was installed and new titanium retainers and beehive valve springs were added. To ensure that plenty of fuel got to the engine, and Aeromotive A1000 pump was installed in the Aeromotive Stealth fuel tank, also a 10 micron inline filter was used. The engine was finished off with ATS carbon fiber valve covers, SPAL Duel 11” fans, a performance radiator, and full ARP studs were used on the heads and mains. 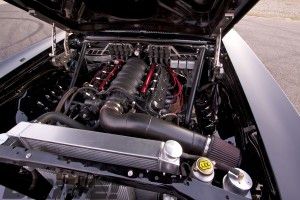 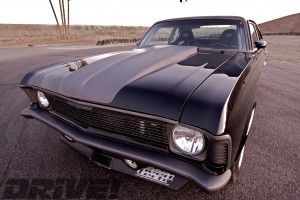 A custom 3” front to back exhaust system was designed by Speed Tech to fit their custom subframe and was built by Stainless Works. The exhaust system features dual Dynomax VT mufflers with long tubes and merge collectors. The result is an engine that is making 510HP at the flywheel at 6200 rpm, and 543ft.lbs. of torque at 5400rpm. To make sure all this power is successful sent to the wheels a manual Tremec Magnum T56 6-speed transmission was installed, and a Ford 9” rear end was outfitted with 3.89 gears. A trutrack differential and strange aluminum center section with aluminum pinion support and chromoly yokes were installed with a 3” chromoly performance drive shaft.

While this car would obviously be fast in a straight line, making this car handle while going around a corner was also a top priority. Therefore a full overhaul on the suspension and braking systems went underway. Up front, the car boasts a full set of Ridetech monotube coilovers with Hyperco springs, Speed Tech Performance track time sub frame with high clearance tubular control arms, rack and pinion, and 1.25” sway bar. Steering was done via a unisteer first gen Camaro rack conversion kit. The rear features a Speed Tech Performance track time torque arm suspension system, with Ridetech monotube coilovers and hyperco springs, and a 1” adjustable swaybar. Included are a set of Speed Tech articulating trailing arms. 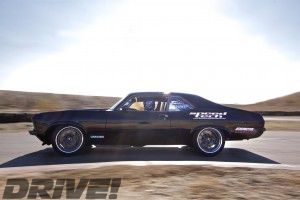 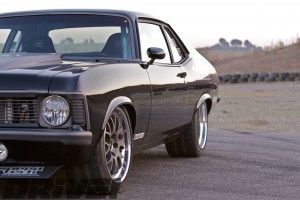 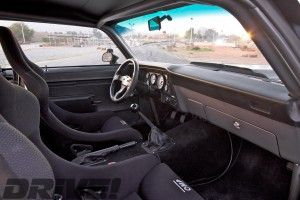 The nova is rolling on a set of Forgeline 3 piece aluminum rims, 18×9.5 with 6.5” backspacing up front and 18x 11 with 5.5” backspacing in the rear. The rims are fitted with 275/35/85 and 295/35/18 Nitto Nt05 in the front and rear respectively. Breaking is handled via Baer 14” vented and slotted rotors with 6 piston calipers in the front and rear. The end result is a powerful car with looks and handling to match. 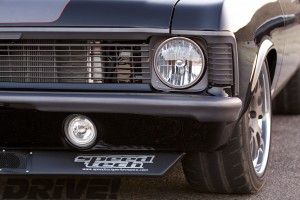 “We were out testing the car 3 weeks prior to SEMA and exploded the original motor,” Blake added. “There was a very big rush to put together an upgraded motor in 2 weeks, the call went out to Jim at Richmond Engines for some assistance in putting together a new 6 liter motor in just 2 weeks. Richmond Engines really came to the party to help out, working a couple Saturdays and bumping a couple other jobs to get this finished in time.” The new motor was put on the dyno with a carb and intake to save some time and simplify the break in.  After a trip around the block we put it in the trailer and drove to Las Vegas for SEMA and then straight to the Optima Ultimate Street Car Challenge where it placed 5th.