Frankensled – This Vic is More Than the Sum of Her Parts

Right from the very beginning in the long history of customizing, swapping out parts from one car to another is what this crazy idea is all about. From the Barris Bros. to Blackie Gejeian to Roy Brizioâ€™s new crew and others, putting the dash, front end or lights from one car onto another is just one way to make what you have different from all the others. Alan Wrublevski is keeping that tradition alive with his â€˜53 Ford Victoria. 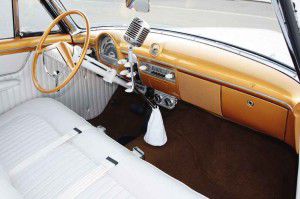 Bathed in House of Kolor Goldmine Pearl and white vinyl, this interior is custom cool.

This Vicky has been through more changes than Sybil during a bad week. It now features a 1954 Desoto grille to go along with the 1955 Chevy headlights, while the hood corners were given a nice radius. Moving further back, all emblems and trim have been removed to give the car a smooth appearance. Shaved door handles added to (or maybe we should say, removed from) the smooth appearance. Itâ€™s an unwritten rule that sleds need something to be frenched, and antennas are an age-old favorite. But where one might suffice, this Ford has twin antennas frenched into the rear quarter panel. All of the customizing came to an end, literally, with the addition of taillights from a 1955 Oldsmobile. 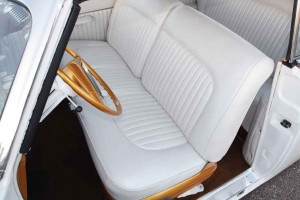 Though the car used to be pink (yeah, pink!), Wrublevski thought that a more period-correct color combination was in order, so he had Louis Acosta and Alfredo Altimar from Upland, California, apply a coating of House of Kolor Pearl paint to the body, while the roof was sprayed with HoK Goldmine Pearl infused with Micro-Flake metal flakes. The result is one that sets the Ford apart from all the others, but still has the prevailing look of the hottest sleds out there today. 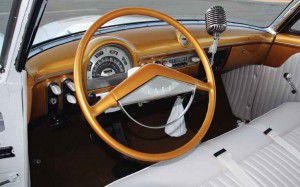 Some of the additions to the Ford are the reconditioned steering wheel that came from a 1951 Ford, the teardrop dash knobs and a an Alpine stereo system.

Carrying that look to the inside, the Micro-Flake-enhanced House of Kolor Goldmine Pearl has been applied to the dash, doors and assorted interior metal pieces, such as the 1951 Ford steering wheel. The seats are the stock units, but they, as well as the doors and kick panels, now feature very cool pearl white vinyl upholstery. Stitched up by the crew at Perez Upholstery in Pasadena, California, the classic 1 Â½-inch pleats on the upholstery really set off the interior. The dash is the stock unit that has been upgraded with cool knobs and an Alpine stereo system installed by Newman Motorsports in Upland, California. 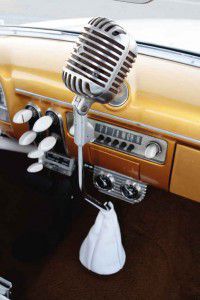 One trick item is the floor shifter. Wrublevski wanted a unique look, so he topped his Gennie shifter arm with a Shure â€œElvis-styleâ€ (Unidyne II) microphone. The result is very original and fits perfectly with the car.

An item that Ford purists may object to is the 350 Chevy engine, but there in no denying that the crate engine, especially when equipped with an Edelbrock carburetor and intake manifold, is a combo thatâ€™s hard to beat. Foothill Auto of Upland added to the mix when they used a set of Hedman headers and an MSD ignition, but it was Wrublevski who gave it some style when he added the 1949 Caddy air cleaner and custom-made Oldsmobile â€œRocketâ€-look valve covers. Backing up the engine is a 350 Turbo transmission equipped with a cruise-happy 220-rpm stall torque converter. Ontario Driveline Service (of Ontario, California, natch) connected the dots with one of its drivelines. 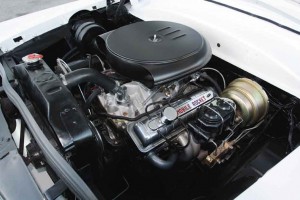 Looking every bit the vintage engine, itâ€™s actually a 2007 edition Chevy 350 crate that has been equipped with a repro 1949 Caddy air cleaner and custom-made Oldsmobile â€œRocketâ€-style valve covers.

All of this rides on the stock frame, but one that has been equipped with airbags to get the Ford down into the weeds. The Camaro front end gets some of that low with 2 Â½-inch drop spindles, while de-arched rear springs hold the Ford 9-inch rearend in place. The housing has been narrowed 3 inches and equipped with disc brakes. We donâ€™t know if Wrublevski has visions of running a Bonneville, but the rearend is equipped with a set of 3.00 gears. Bagman in Anaheim, California, did the air suspension and added a set of their anti-sway bars while they were at it. 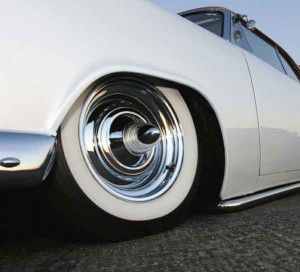 This Ford rolls low on wide Coker Classics 2 Â½-inch wide whites that have been mounted on 15-inch chrome smoothies. The chromed bullet caps are the perfect finishing touch.

There is nothing like wide whites, and when the Coker Classics 2 Â½-inch wide whites (195/75/15) were mated with the 15-inch chrome smoothies, the result is pure cool. The addition of the bullet caps is the prefect finishing touch. 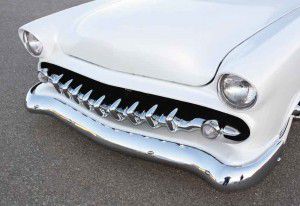 Giving the Ford the classic look is the 1954 Desoto and 1955 Chevy headlights. Even the hood corners were given a nice radius to keep things smooth.

Itâ€™s no secret that we love a sled, and we also love the ideas from the past that made builders look at pieces of cars and think, what if? It seems that Alan Wrublevski agrees with that sentiment. Even though he has had a lot of cars in the past (they were mostly muscle cars or â€˜Vettes) this Ford is his first â€œcustom.â€ With the way this car has turned out and with Wrublevskiâ€™s love of cruisinâ€™, we think that he will keep this fine ride a long while. 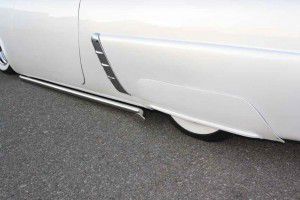 When you can barely see the white walls behind the skirts, you know that itâ€™s low.