Many of Ron Segal’s (Santa Clarita, CA) cool rides have been featured in a variety of publications, and he’s collected a forest of trophies. Ron’s latest creation was built as a tribute to one of his earlier street rods, Howdy Doody, an all-steel ’29 Ford delivery that was chopped and dropped with a 302-ci V-8 wedged between the frame rails. 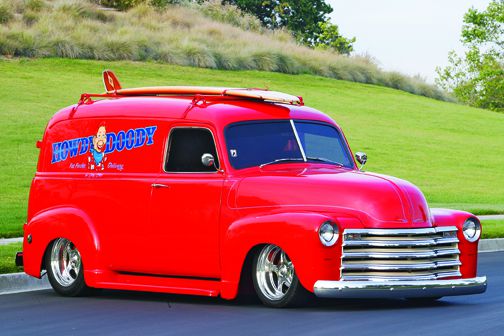 To commemorate Howdy Doody, Ron decided to build Howdy Doody II, the ’47 Chevy panel splashed across these pages. He got together with his longtime buddy, RC Lindly, who owns RC Classics in Palm Desert, California. RC has helped Ron with many of his award-winning customs. With additional help from Dan Condon, the two spent the next 1 ½ years building the panel. 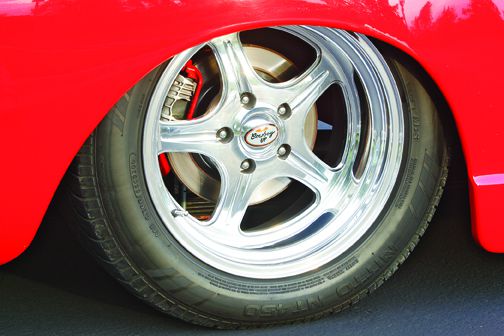 They began by boxing the 1947 frame rails and fusing a Mustang II front clip to them with 2 ½-inch dropped spindles sandwiched between the upper and lower control arms. The “whoa” power is produced by Corvette front disc brakes. Howdy Doody’s lateral direction comes from a Mustang II power steering rack, while the corners are flattened out by a 1 ½-inch sway bar. The front suspension is equipped with a pair of Ride Tech pneumatic ‘bags to lower the nose. A pair of lowering blocks drops the GM 12-bolt rearend stuffed with 3.73 gears and a Truetrac unit. The rear frame rails were notched to allow ample negative vertical travel of the rear suspension. A pair of Corvette disc brakes was installed to slow the rear’s rotating mass. Howdy Doody II rolls on a set of Boyd Coddington Genesis polished aluminum wheels—17 x 8 front, and 17 x 9 rear—that are wrapped with Nitto NT450 235/40ZR-17 front and 275/50ZR-17 rear rubber. 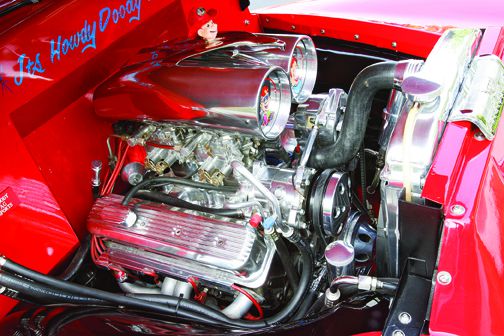 Under the hood we discovered a healthy Chevy 350-ci small-block that was built with all of the right components, starting with a Scat forged 4340 steel crankshaft. Manley I-beam connecting rods and J&E pistons fit with Clevite bearings and Total Seal rings followed up the crankshaft. For both performance and wow factor, a Comp Cams Mother Thumpr bump stick was inserted with lifter and push rods. The crank and camshaft are synced with a Jackson gear-drive. An Edelbrock high volume water pump circulates the engine coolant. A pair of aluminum Edelbrock Performer RPM cylinder heads with valves, springs and roller rockers are encased with Billet Specialties polished aluminum finned valve covers. The fuel delivery system is regulated by an Edelbock mechanical fuel pump that delivers fuel to a pair of Holley 450-cfm carburetors mounted on an Edelbrock RPM Air Gap dual-quad aluminum intake manifold with a pair of Edelbrock Thunder AVS 500-cfm carburetors, capped with a Speedway Motors Shot Gun Bill’s Double Barrel Air Scoop. A PowerMaster 150-amp alternator supplies the electrical juice to the MSD ignition system. The interior’s creature comforts are controlled by a Hot Rod Air unit. A set of Billet Specialties polished aluminum pulleys and power steering pump finishes off the engine’s clean appearance. The throaty voice of Howdy Doody II is drawn by a pair of Hedman block-hugger headers that collect into a 2 ½-inch exhaust that flows into a pair of Flowmaster dual chamber mufflers. The engine is kept cool via an aluminum radiator, and it’s backed up to a GM 700R4 automatic transmission with a B&M shift kit.