My pride and joy! I had looked for years trying to find a replacement for the 1980 black Turbo Trans Am that I had to trade in. I recently learned that it was totaled when the guy’s wife hit a cow with it. I finally found this one a couple of years ago and couldn’t resist. I still wish I had my first one though; a black one and a gold one would look sweet in my driveway.
Specs

Solar Gold 1979 Pontiac Trans Am with a camel tan interior. Previous owner changed some of the interior parts with incorrect ones, but I am in the process of restoring them.
Factory Options

This information was taken directly from the build sheet and window sticker that was found in the car. The Pontiac Historical Society also backs up this information. 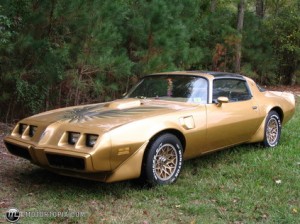