In 1978 i bought my first car, a 1976 carousel red Trans am with black interior! Boy the stories that could be told & the good times!â€¦.She always carried more beer then gas! She’s gone ,had to be sold in the 80’s.
Threw the years i’ve owed some nice cars & trucks and had to fixed up a few.
About 6 years ago my son saw a 76 T/A on ebay and said you should do one like the old car dad, he was 15 â€“ and so it started!

Thanks Tommy ,for the insparation for the biuld.
Specs

Click on the albums or video’s ~ to see pic.’s -or watch video’s. You can leave comments or trophys!

Thanks for looking & best wishes with yours!!! 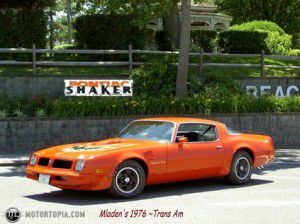